Volt/VAR Management Market is expected to grow at 6.50% CAGR during the forecast period.

Volt/VAR is an advanced management system that identifies the most effective set of control actions for all voltage regulating devices and VAR control devices to achieve more specific operating objectives while maintaining fundamental operating restrictions. Volt/VAR additionally features a conservative voltage control mechanism that calculates and maintains an acceptable voltage for all customers supplied by the feeder's service entry under all operating conditions. The utilities and industrial applications are the principal end customers of the Volt/VAR management system. Volt/VAR management techniques are used by utilities to reduce peak demand and energy consumption. Peak demand reduction is commonly used to lower load for a brief period. The conservation voltage reduction (CVR) method is used to reduce energy usage over a long period.

Due to an increase in demand for efficient power and the usage of renewable energy resources, the Global Volt/VAR Management Market is predicted to grow at a rapid pace throughout the forecast period. With the deployment of a variety of distributed energy resources, the modern grid is undergoing numerous evolutionary changes. Increased reliance on renewable energy sources causes the grid network to become more complex, resulting in voltage variations.

Global Volt/VAR Management Market has been segmented based on application, component, end-use, and region. On the basis of component, the market has been classified into hardware and software & services. The hardware segment dominates the market as various upcoming power generation projects in the renewable as well as conventional power sectors are expected to boost the demand for hardware component during the forecast period. 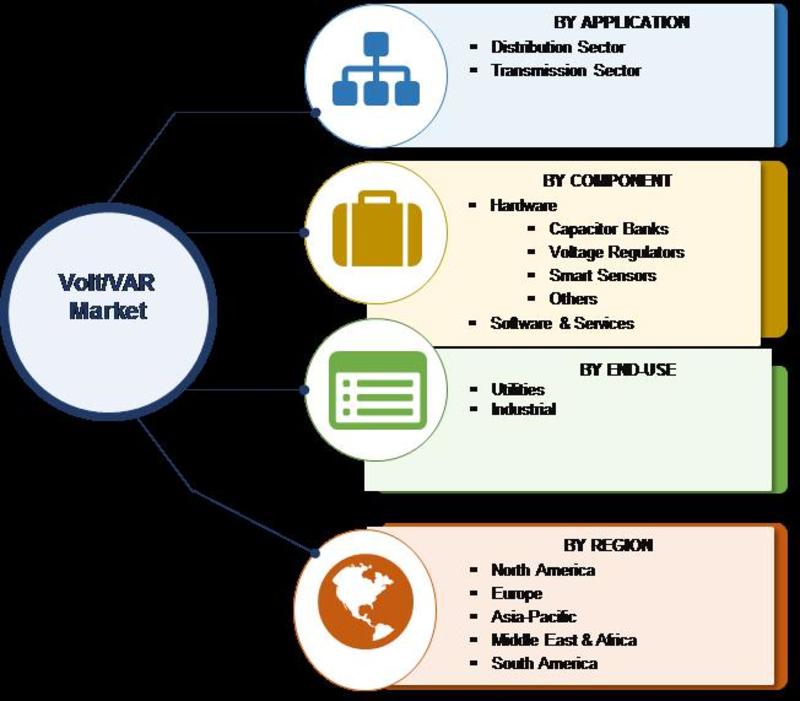 Volt/VAR is an advanced management system that determines the most appropriate set of control actions for all voltage regulating devices and VAR control devices to achieve more specified operating objectives without violating any of the fundamental operating constraints. Volt/VAR also includes conservative voltage regulation function that is used to calculate and maintain acceptable voltage at the service entrance of all customers served by the feeder under all operating conditions. The primary end users of the Volt/VAR management system are the utilities and industrial applications. Utilities implement Volt/VAR management practices to achieve reduction in either peak demand or energy consumption. The peak demand reduction approach is generally used to reduce load for short duration. The energy consumption approach is usually referred to as conservation voltage reduction (CVR) and is used to reduce energy consumption for an extended period.

Focus on reduction in transmission & distribution (T&D) losses, reducing the operational cost, rising demand for electricity, and complexity of distributed energy generation are some of the major factors driving the Volt/VAR Management Market. In North America, majority of Volt/VAR devices based on hardware and software have been deployed. Moreover, the favorable regulations and incentives to utilities in order to achieve system-wide energy savings and reduce peak demand will also drive the Market, management being an essential part of the entire voltage regulation process.

Global Volt/VAR Management Market is expected to witness a high growth rate during the forecast period due to a rise in demand for efficient power and the use of renewable energy resources. The modern grid is facing various evolutionary changes with regards to the adoption of a number of distributed energy resources. Increased dependence on renewable energy resources results in  higher complexity in the grid network, leading to voltage fluctuations. In order to minimize this complexity, electric utility operators focus on adopting a foolproof system, which would help manage these complexities in the system, driving the global Market.

What is the market value of the global Volt/VAR market?

The global Volt/VAR is expected to record a substantial market valuation due to the increasing global consumption of energy.

What is the estimated growth rate of the global Volt/VAR?

The global Volt/VAR is projected to register a moderate 6.5% CAGR in the forecast period.

What is the component segment of the global Volt/VAR market expected to witness the highest growth?

The hardware volt/VAR segment is slated to expand as the fastest-growing segment.

What is the application segment of the global Volt/VAR market expected to witness the highest growth?

The transmission sectorsegment is slated to expand as the fastest-growing segment.

Who are the key players operative in the global Volt/VAR market?