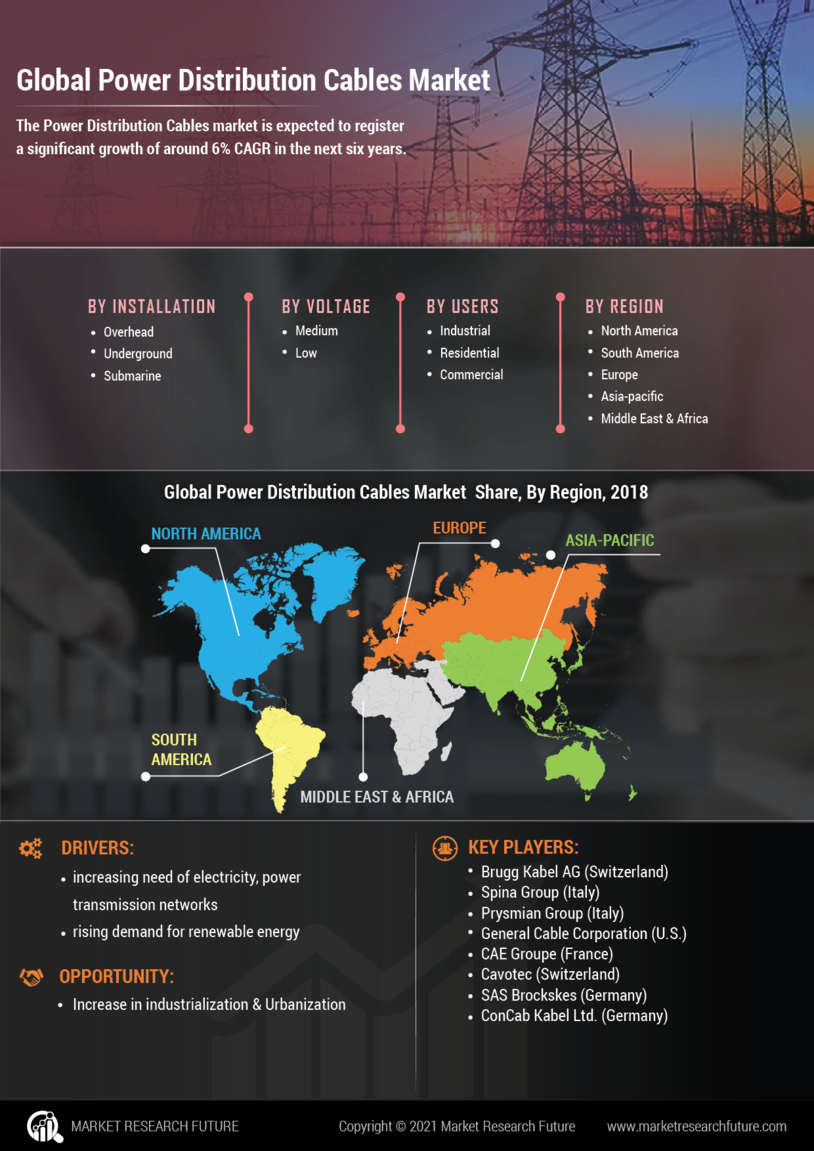 Power distribution cables market is expected to rise with an expected rate of 9.85% during the forecast period. The power distribution cable is a type of electrical wire which is an assembly sheath of more than one cable. It is majorly used in transmitting electrical power.The cables which supply power are either installed within the building with the help of permanent wires in form of exposure, overheads, and ground.

In recent times, the pandemic has hit hard on the global context, due to which the market for power cables is severely impacted. In addition to this, construction and reconstruction projects are on a halt due to strict social distancing norms that are in place for protecting the virus spread. Also, the manufacturing companies of wires are facing severe issues as there is a high disruption in supply chains. Many countries have imposed national and international lockdowns due to which exports & imports of raw materials have been impacted largely.

The production units are being operated at partial capacities due to reduced labour availability, low demand, high costs of raw- materials. The cables are also used for renewable sources of energy, thus improving market demands in industries as well. However, the disruption in the supply chain has impacted manufacturing units as well the market of end-users.

Drivers- Increasing Investments in renewable sources of energy will be the driving factors for power distribution cables market growth. The capacities for renewable energies have increased due to strict policies and government initiatives for the same.  The majority of construction projects are driven by the increase in sustainable energy capacities due to the connection of national utility firms with wind farms. In addition to this, there have been increasing investments for meeting industrial and increasing urbanization which will further fuel power distribution cables market growth.

As per the reports of the World Investment Report, it is estimated that Asia- Pacific will exhibit investments for USD 476 billion. This foreign investment for building interconnections within the power grid due to rapid industrialization.  This will positively impact power distribution cables market growth.

Opportunities- Transmission and distribution sectors have witnessed a 60 % increase in investments for varied types of equipment in electrical networking. In this view, the smart grid consists of automated, widely distributed networks for delivering energy with competencies that are organic and responsive. The power distribution cables industry has wide opportunities in smart grid sectors as they are preferred for their unique capabilities.

In addition to this China Market will provide higher growth opportunities as demand for smart grids will increase by the year 2030. In this view, China has a high demand for energy consumptions which is expected to triple by the year 2025. Thus, the country is planning to elaborate on smart grid networks.

Restraints- In the majority of the countries, electrical grids have been in use for decades. Hence, it is an extremely expensive process for conversion to the smart grid. Thus, the smart grid market growth will be restricted due to the limitation of usage in existing projects. This will further impact market growth for power distribution cables.

Challenges- In many regions, networking is not developed. However, the installation of smart grids requires internet facilities for providing real-time information. Also, data breaches and cybercriminals have increased over few years which poses a challenge to secured networking.  Thus, the power distribution cables industry will face an acute challenge in generalising the installation of smart grids to main grids.

The market demand for electricity has increased on a global basis, due to work from home and online conduct of classes in the full or partial lockdown areas. However, the industry is working on partial capacities which have further impacted the market growth on a short and long-term basis.

The infrastructure expansion and rise in the construction industry will drive the demand for power distribution market growth. As the localised power distribution systems and power network are being designed in alignment with the new building codes. This will further help in increasing the market demand for conductors and power cables. However, the pandemic is expected to influence market growth on a short-term and long-term basis.

Hydropower and wind power are attracting market growth as the prices of energy as well as targets for generalising the use of renewable sources of energy have improved. The government has put incentives on connecting renewable sources of energy with main grids which are further expected to increase the power distribution cables market growth. In addition to this, the new building codes and high preference for green infrastructures will accelerate the power distribution cables market size.

The market segment for power distribution cables is divided into installation, voltage, users, and region.

By Installation- Overhead, Underground, and submarines.

By Voltage- The voltage segmentation is further subdivided into low, high, medium, and extreme high. The low voltage cables and wires are generally used in automation, lighting, sound and security, video surveillance, and others. It is estimated that medium-sized voltage will capture the highest market share. As it is highly demanded in telecommunication device substations, commercial infrastructures, universities, hospitals, and other commonly used constructed structures.

Also, the medium-voltage wires are extensively used for distributing power amongst high voltage power supplies.  In addition to this, high voltage cables and wires are expected to generate high revenues due to expansion from conventional to smarter grids. The expansion has been supported by various government initiatives and funding. The extreme voltage power cables are used for industrial purposes like airports, railways, steel, nuclear and thermal power.

By End-user- The end-user market is further subdivided into defense, construction, IT & Telecommunication, power transmission, oil and gas, automotive production, and others. The construction sector has been increasing due to the expansion of residential and commercial infrastructures.

The regional analysis for power distribution cable market size will include North America, Europe, Asia- Pacific, Middle East, and Latin America.  Asia- Pacific holds the largest market share with a worth of USD 76.50 billion in the year 2019.  India and China have been increasingly investing in transmission and distribution. The regional growth in Asia -Pacific can be contributed to the rise in demand for renewable sources of energy.

Also, it is estimated that Asian Developmental Bank will invest approximately USD 300 million in the capital region of Bangladesh for expanding transmission lines. North America will hold significant market shares after Asia- Pacific. As the region has a high demand for energy generation and efficiency, moreover, renewable sources electricity generation reached 13% in the year 2019.

Europe will also high contribution regions for power distribution cables market growth. Owning to the increasing investments made in the grid infrastructure due to high demands for renewable sources of energy. It is estimated that the Nordic Transmission system has been planning for making an investment worth 16.79 billion by the year 2028.

In addition to this, the rest of the regions like Latin America, the Middle East, and parts of Africa will also provide high growth owning to considerable demand for energies. Huge investments are being made in the cable and wire market of the Middle East and Africa for reaping opportunities from fuelled demands.

What is the expected CAGR of the Power Distribution Cables Market?

It is anticipated that the Power Distribution Cables market will reach a CAGR of 9.85%.

What will be the market drivers?

The driving forces of the market will be increasing requirements for electricity and transmission networks. Rising demand for renewable energy sources is another driving force.

It is estimated that the Asian Pacific market will capture the highest market share owing to the increasing demands for energy consumption. Specifically in regions like India and China.