The growth of the global vinyl acetate monomer market is driven by the rapidly growing packaging industry across the globe. The increasing demand for packaged beverages and food products owing to convenience and improved product shelf is expected to propel market growth. With the introduction of multiple-layer barrier packaging technology, demand for the product is rising in the packaging industry.

VAM consumption is increasing in the construction industry on account of rising residential and commercial infrastructure activities in both developed and developing regions. The increasing demand for adhesives and paints and coatings from major end-use industries such as automotive, construction, and packaging is also propelling market growth.

Some of the growth strategies adopted by the key players in the vinyl acetate monomer market include expansions, acquisitions, and new product launches. For instance, in 2019, Celanese Corporation, a US-based global technology and specialty materials company, expanded its production capacity of VAM in Clear Lake, Texas. 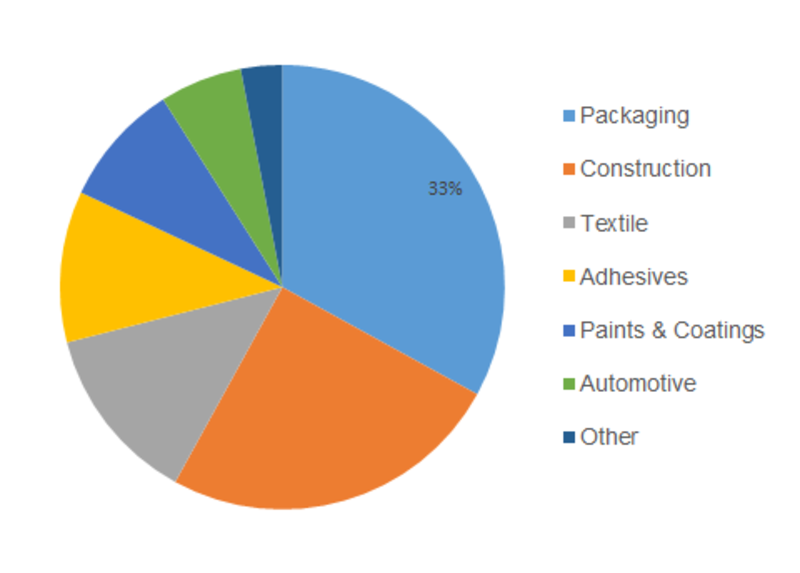 Asia-Pacific accounted for the largest share of the vinyl acetate monomer market in 2019; the regional market is expected to continue its dominance during the forecast period due to the rapidly growing packaging industry with the increasing demand for packaged beverages and food products. Additionally, rising residential construction activities in developing nations such as India, China, and Thailand, coupled a growing population base and rising disposable incomes of consumers, is driving market growth.

North America is another prominent region for the vinyl acetate monomer market on account of the rising demand for adhesives and coatings from major end-use industries such as automotive and construction. The reviving automotive industry with increasing automobile production is expected to offer lucrative growth opportunities for players in the vinyl acetate monomer market in the coming years.

Europe is also a major vinyl acetate monomer market with the increasing use of biodegradable plastic in the packaging industry due to the ban imposed by the European Union on landfill as of 2016.

The Latin American vinyl acetate monomer market is witnessing considerable growth with the rising demand for packaged beverages and food products due to the need for convenience and high per capita income of consumers.

The market in the Middle East & Africa is likely to exhibit considerable growth during the review period on account of the rapidly growing industrial base in the region.

The global vinyl acetate monomer market has been segmented by application, end-use industry, and region.

Based on end-use industry, the market has been segregated into packaging, construction, textile, adhesives, paints and coatings, automotive, cosmetics and personal care, and others.

Based on region, the vinyl acetate monomer market has been segmented into North America, Europe, Asia-Pacific, Latin America, and the Middle East & Africa.

What is vinyl acetate monomer and what are major factors driving its applications?

Vinyl acetate monomer (VAM), also known as acetic acid ethenyl ester is widely used as a basic chemical in the manufacturing of many chemicals. The rapidly growing chemical industry is the major factor driving the applications of VAM.

What are the major end-use industries of vinyl acetate monomer?

Which region holds the largest share in the global vinyl acetate monomer market?

What are the key growth strategies of vinyl acetate monomer industry players?

Strategic initiatives such as mergers & acquisitions, collaborations, expansion, and technology/ product launch are some of the growth strategies that players operating in the global vinyl acetate monomer market adopt to gain a larger competitive advantage.

Who are the top players in the global vinyl acetate monomer market?