According to the latest research report, the global ethylene vinyl acetate market size is predicted to witness significant growth during the forecast period. The copolymerization of ethylene with vinyl acetate monomer yields the thermoplastic resin EVA, which may be used to manufacture thermoplastic products. A number of outstanding characteristics of EVA include its transparent and flexible nature, as well as its exceptional optical qualities, chemical resistance, strong impact resistance, durability and fracture resistance. In addition to foamy and film extrusion and injection moulding, it is also used in solar cell encapsulating and hot melt adhesives and varnishes.

The need for EVA is expanding worldwide as a result of the increased usage of EVA in the packaging sector in a variety of industries such as food packing, medical packing and beauty wrapping, among many others. With the expansion of the packaging sector and the increase in desire for prepackaged food and drinks from workers owing to better accessibility and extended shelf life, the need for plastic films and, therefore, EVA is on the rise.

This report contains all the information on the global ethylene vinyl acetate market analysis and its strengths. In addition, the report also includes the culmination of dynamics, segmentation, key players, regional analysis, and other essential factors. And a detailed analysis of the global ethylene vinyl acetate market forecast for 2030 is also included in the report.

The stoppage of manufacturing operations, the interruption of the distribution chain, and the sharp decline for commercial products as a result of the COVID-19 outbreak had a substantial influence on the economy. Nevertheless, as a result of the COVID-19 epidemic, there has been an increase in the usage of medical sector items, which has helped to fuel the expansion of the EVA market. In addition, as a result of the panic scenario, individuals worldwide stock up on personal hygiene products, which stimulates the market in the short term. On the other hand, the pandemic had an impact on the end-use sectors, such as shoes and foam.

Substantial expansion in the solar power sector is being fueled by enormous public spending from rich and developing countries throughout the world. Help spread awareness about alternative sources of power. Unlike fossil fuels, which pollute the atmosphere and contribute to global warming, renewable energy is among the most stable and clean forms of energy. When it comes to solar modules, encapsulation agents like ethylene-vinyl acetate are utilised because of their high radiation transfer and minimal degradation in the presence of sunshine. Sealing and insulation coatings are also formed around the solar panels using it.

Environmental rules against carbon pollution are becoming more strict, which has led to an increase in the use of renewable energy sources to generate electricity rather than fossil fuels. As a result, increased investment in photovoltaic panels in emerging countries, particularly India and China, is likely to provide attractive prospects for firms operating in the worldwide electro-vehicular transportation market.

Although the market is expected to develop, changes in the accessibility and costs of raw ingredients, as well as technical issues related to EVA, may limit its expansion.

There are certain disadvantages to using EVA copolymers in encapsulation, as well as some advantages. When subjected to ambient water or UV light, EVA copolymers begin to decompose and begin to produce acetic acid at a slow pace, resulting in a reduced pH level and enhanced surface erosion on the material surface.

China is home to the world's 2nd largest packaging sector. Custom package in the food sector, such as microwave meals, salty snacks, and packaged meals, is predicted to drive the country's development throughout the forecast timeframe. EVA has replaced Polyvinyl chloride as one of the most often utilised materials when it comes to packaging. There is no need for curing when using EVA copolymers, and they do not emit any smell. EVA's benefits over traditional packaging polymers are driving a massive increase in the usage of EVA in packaging. Because of this, China is engaged in the sale of a wide range of items in large or small quantities to various countries throughout the world. Because of this, EVA packaging uses in the nation are increasing.

According to the reports, The worldwide ethylene vinyl acetate market is categorized based on type, application, end-use, and geography. Type is the most critical segment, followed by application and region. On the basis of density, the industry has been divided into three categories: medium-density EVA, low-density EVA, and high-density EVA. Furthermore, the market has been categorised into compounding, hot melt adhesives, foaming, solar cell encapsulation, wires & cables, film extrusion, injection molding, coatings, and others, based on the applications used.

The market is segmented on type, application, end-use, and geography. As a result, the global ethylene vinyl acetate market trends are expected to witness decent growth during the forecast period.

The application is segmented into compounding, hot melt adhesives, foaming, solar cell encapsulation, wires & cables, film extrusion, injection moulding, coatings, and others based on the application. 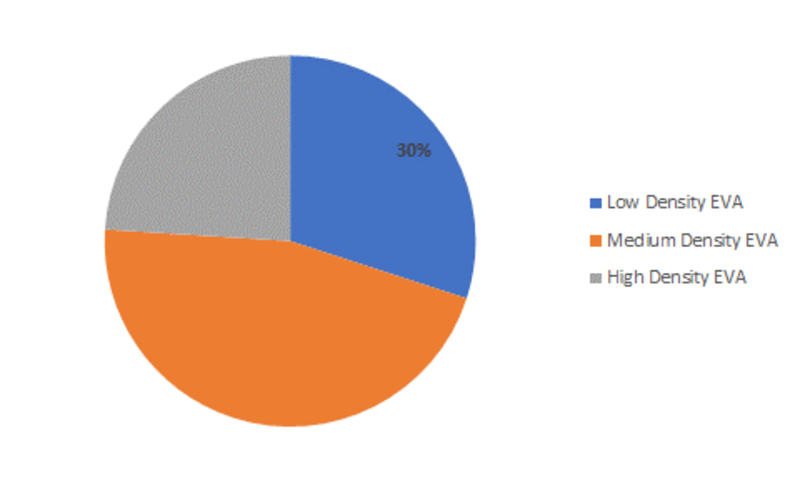 According to the reports, There are five regions in which the EVA market has been studied: North America, Europe, Asia-Pacific, Latin America, and Middle East & Africa. According to industry analysts, the market in Asia-Pacific held for the most significant proportion of the global EVA market in 2017. Moreover, it is predicted to grow at a healthy rate throughout the study period. The market is being driven forward by the increasing packaging business, which is a result of the middle group's increased need for processed food goods and increasing per capita expendable income. Additionally, expanding residential building activity in emerging countries like China, India, and Thailand are propelling the market's upward trajectory.

As a result of the developing packaging sector and growing preference for packaged foods and drinks, the European market is yet another important ethylene vinyl acetate market share. In addition, the adhesives sector is expanding as a result of consumption in a variety of end-use applications, including automobiles, buildings, paints and varnishes, and many others.

The manufacturing and automotive industries in Latin America are predicted to develop at a rapid pace, resulting in significant ethylene vinyl acetate market growth for the region. Furthermore, because of the increasing industrialisation in the area, the Middle East and Africa market is expected to expand substantially during the study period.

The leading players in the global EVA industry are strongly emphasising expanding their production capacity. Examples include Celanese Corporation, which began producing EVA in 2016 at its latest EVA processing facility at its production plant in Singapore. This expansion step has already been made to address the expanding need for EVA in various sectors in Southeast Asian nations, including the automobile, packing, construction and real estate industries.

How big is the ethylene vinyl acetate market?

The ethylene vinyl acetate market is projected to reach USD 1,300 Million by 2027

Who are the top players in the global ethylene vinyl acetate market?

Which are the leading segments in the global ethylene vinyl acetate market?

Based on application, the foaming segment and based on end-use industry, the packaging segment account for the leading share in the global ethylene vinyl acetate market.

Which region holds the largest share in the global ethylene vinyl acetate market?

What are ethylene vinyl acetate materials and its main types?

What are the major applications and end-use industries of ethylene vinyl acetate?

Foaming, film extrusion, and solar cell encapsulation are major applications of ethylene vinyl acetate, which is extensively used in end-use industries such as packaging, renewable energy, and adhesives & sealants

The surge in demand for EVA in solar panel production is likely to boost product demand.