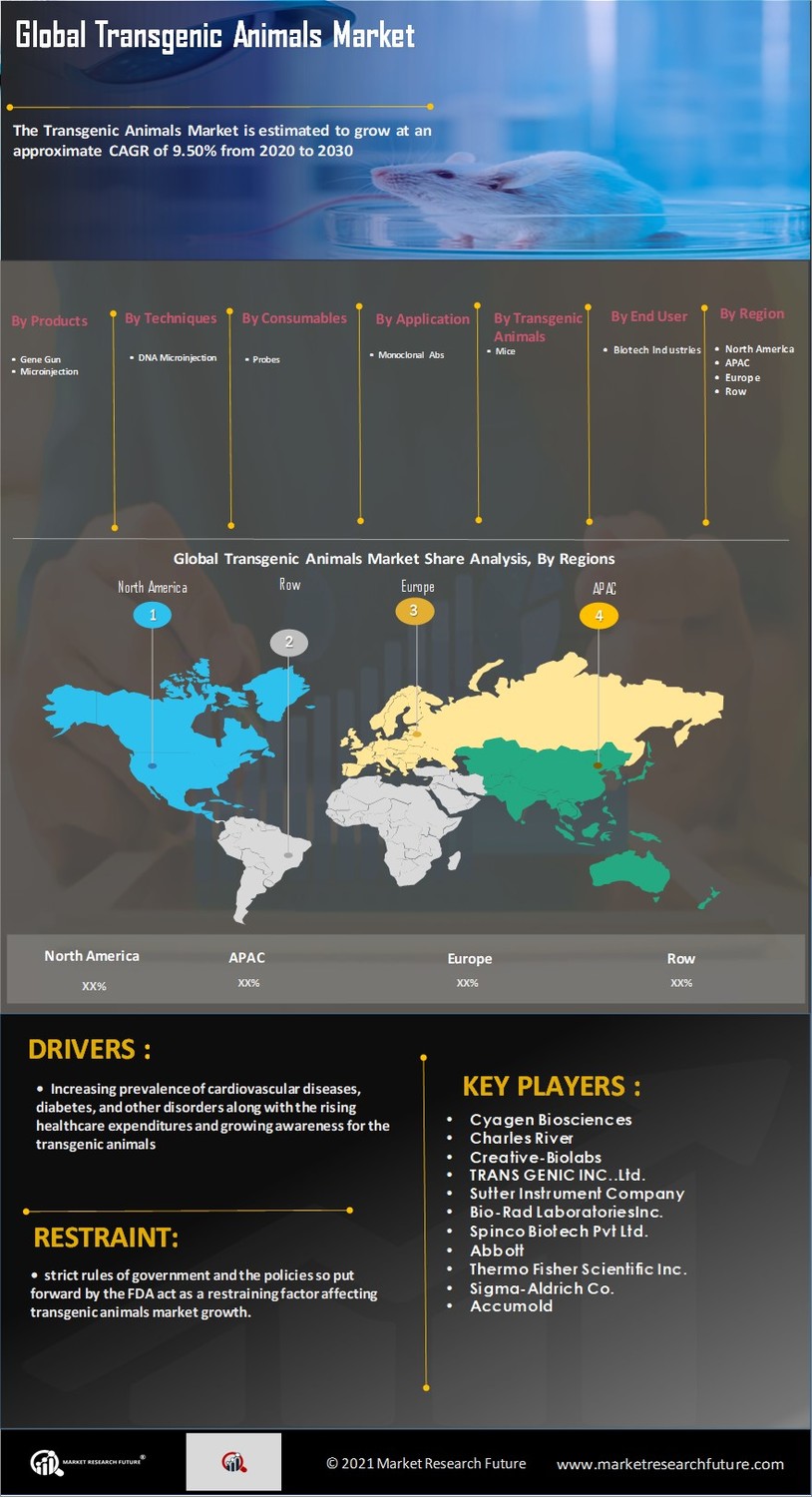 The Transgenic Animals Market is projected to reach USD 6,744.50 Million by 2030 at 9.5% CAGR during the forecast period 2022-2030. Transgenic animals always carry a foreign gene that is inserted into their genome. A new recombinant DNA technology is being used where foreign DNA is inserted into the host body. The foreign gene is facilitated easily through the germline so that each of the animals has some of the modified genetic material. In 1997, the first transgenic cow named Rosie was produced and was considered the human enriched proteinaceous milk cow. The milk produced was nutrient-rich as compared to natural bovine milk. This nutrient-rich milk is helpful for the geriatric population and babies. Milk from transgenic cows, sheep, or goats contains growth hormone, insulin, and anti-blood clotting factors. In the year 2016, the transgenic animals market revenue which is required by some of the biotech industries is expected to occupy a market value of USD 139.4 billion.

In 1997, as per the World Health Organization globally the improvement in natality rate among the population was the increase in cardiovascular diseases. Moreover in 2015, globally it was marked that approximately 32% of people suffered death. Transgenic Animals Market was also due to the rise in cardiovascular disease, and it has also been noted that 7.4 million people died due to coronary heart diseases and 6.7 million people due to heatstroke. Globally, the cost of production of transgenic animals may project at a market value of USD 20,000 to USD 3,00,000.

COVID had a bad effect on the whole of the world for which people feared to travel to the veterinary hospitals. People did not visit the hospitals even when required. This minimized the diagnosis demand and delay in diagnosis was marked. The treatment of the animals also faced little problems. COVID hindered the demand for animal health management products. The coronavirus has failed to keep the livestock free from being healthy.

It has been found that, based on the region, it has been divided into America, Europe, the Middle East, and some of the African regions. It has been found that the American region is said to be the most dominant region which owes a large area of market growth. Here the people have adopted new technology which has helped the people for treatment of diabetes and cardiovascular disease of transgenic animals. High growth in healthcare expenditure, along with the growth in economic conditions in both market and in the healthcare sector which boosts up the market growth. The European region is said to be the second-largest region holding a large transgenic animals market revenue. Growth in research and developmental activities in the medical sectors, along with the huge rise inpatient population has propelled up the market size.  The United Kingdom is expected to occupy a major share and is said to be the fourth largest manufacturer. Here biotechnological research and developmental activities have taken place in a wide range. In the region of Asia Pacific, the rise in awareness regarding transgenic animals and the increasing awareness about the healthcare units propels up the market growth. An increase in inpatient disposable income of the Transgenic Animals Market during the market forecast period raises the growth. Some of the emerging countries of India and China have a good biotechnological sector along with the growth in infrastructure activities that have fueled up the market growth. As per the Indian Brand Equity Foundation in the year 2017, the Indian biotech market occupies a 2% market share globally. The biotech industry consists of about 800 companies that occupy a market value of about USD 11.6 billion in the year 2017.

Report OverviewThe Market report summarizes the biotechnological techniques which are so used for transgenic animals market applications. It gives details about the vaccine segment which has been put forward. It gives details about the research studies and the routine vaccination systems. It gives a detailed analysis of the market segmentation as to which the market is divided. As per the market trends, it has been marked about the recent developments during the market forecast period. It also symbolizes the growth factors that have helped in improving the growth of the market. The trends depicted in the forecast indicate that soon this market is going to gain good growth.

At what CAGR is the global transgenic animals market projected to grow in the forecast period (2022-2030)?

Transgenic animals market is projected to grow at approximately 9.50% CAGR during the assessment period (2022-2030).

What are the major tailwinds pushing the growth of the global transgenic animals market?

Growing biotechnology sector and rising R&D expenses are the major tailwinds pushing the growth of the global transgenic animals market.

What are the key growth impeders of the global transgenic animals market?

The high developmental cost and reluctance in the acceptance of transgenic products are major growth impeders for the global transgenic animals market.

Which region holds the largest share in the global transgenic animals market?

North America holds the largest share in the global transgenic animals market, followed by Europe and the Asia Pacific, respectively.

Who are the top players in the global transgenic animals market?

Americas Transgenic Animals Market to grow at an approximate CAGR of 8.60% during the forecast pe...