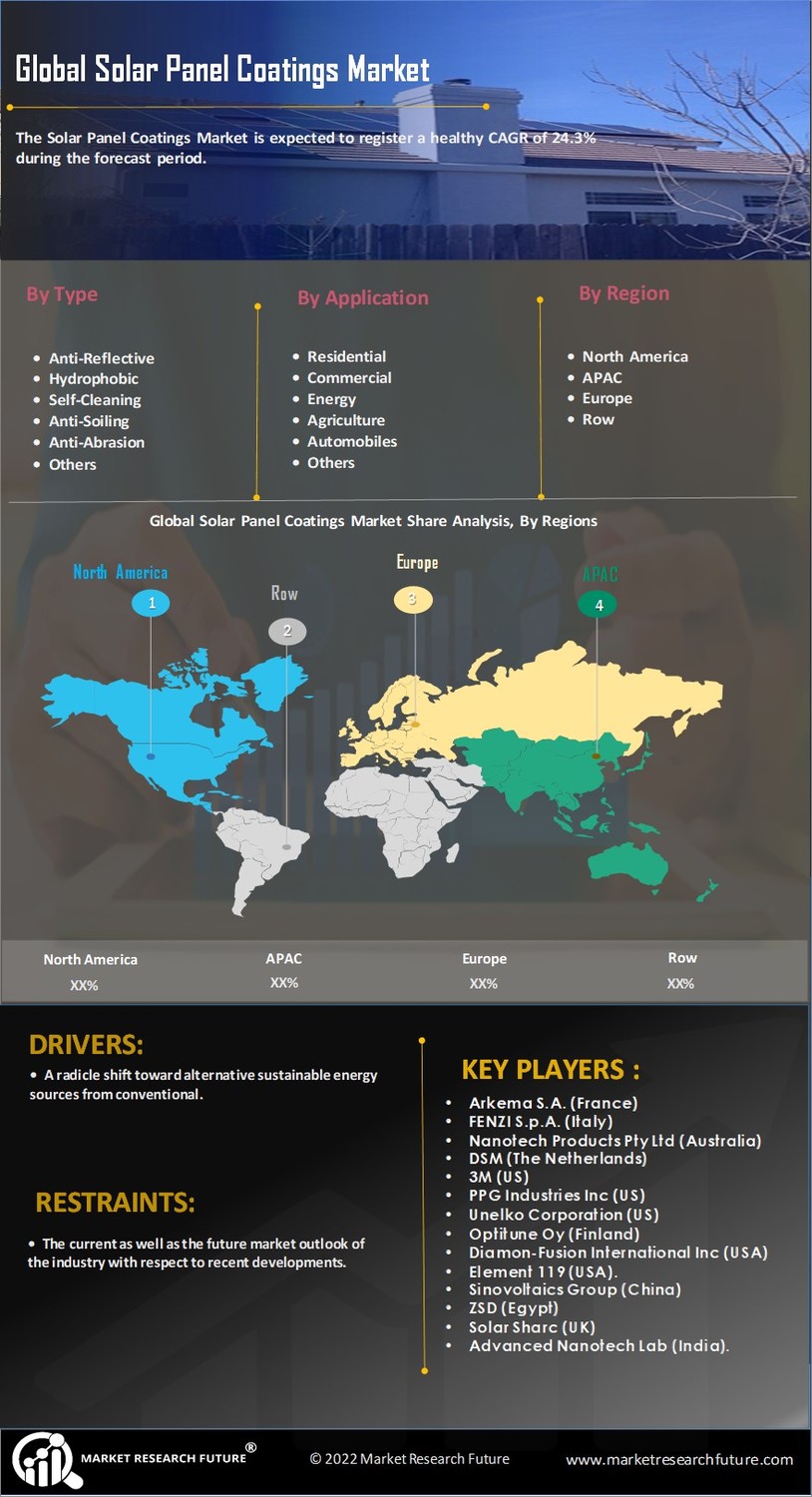 The solar panel coatings market has been segmented based on type, origin, method of extraction, application, and region.

By type, the solar panel coatings market has been classified into anti-reflective, hydrophobic, self-cleaning, anti-soiling, anti-abrasion, and others.

On the basis of application, the global solar panel coatings market has been divided into residential, commercial, energy, agriculture, automobiles, and others.

Solar panels absorb solar energy and generate electricity by means of photovoltaic cells. The continuous exposure to external harsh environmental conditions such as dust, moisture, heat, and ultraviolet radiation decreases the efficiency of solar panels with time. To prevent the solar panels from environmental deterioration and enhance the performance, solar panel coatings are applied over the surface. For instance, a single thin film of silicon dioxide and titanium dioxide as a solar panel anti-reflective coating increases the efficiency of solar cells by 3–5%.

Various countries such as the US, China, Japan, and Germany are adopting solar energy as an alternative energy source for the generation of power. The escalating demand for solar panels across the world coupled with a radicle shift toward alternative sustainable energy sources from conventional fuels, which cause detrimental effects on the atmosphere, is expected to drive the global market growth during the review period. For instance, according to the Solar Energy Industries Association (SEIA), the US installed 2.7 gigawatts of solar photovoltaics (PV) in the first quarter of 2019. Furthermore, the industry is expected to hit 3 million installations by 2021 and 4 million by the end of 2023.

In addition, the growing concern regarding energy crisis and the initiatives taken to reduce the greenhouse emissions are also expected to fuel the demand for solar energy as one of the prime sources of harnessing the power and create lucrative opportunities for the key players operating in the global solar panel coating market. 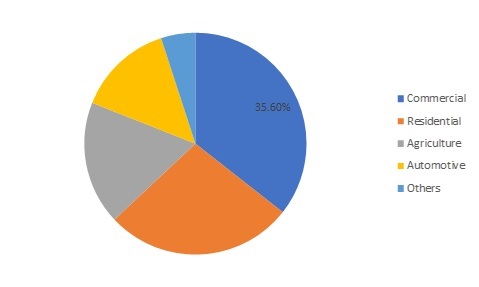 The global solar panel coatings market, by region, has been segmented into Asia-Pacific, North America, Europe, Latin America, and the Middle East & Africa.

Asia-Pacific was the dominant regional market for solar panel coatings in 2018 and is expected to register a healthy CAGR in the coming years. This can be attributed to the increase in the number of installations of solar panels in the region. China is expected to be the leading market followed by India and other Southeast Asian countries in the region. For instance, in 2018, the cumulative installed capacity in India exceeded 19 GW, i.e., growth by 127% as compared to 2017. In addition, the increasing industrialization has resulted in high pollution and deposition of debris over the surface of solar panels thus reducing the efficiency by 30%. This, in turn, increases the demand for solar panel coatings in the region.

The North American market is expected to witness substantial growth during the forecast period. This is due to the healthy growth of the solar industry coupled with the dramatic decline in the cost of solar installations in the region. The US is projected to be the prominent country-level market during the forecast period owing to the increasing demand for clean energy fuel.

The European market is expected to register a significant CAGR during the forecast period, owing to depleting reserves of fossil fuels and surging demand for sustainable energy in the industrial and automotive sectors. Germany is expected to be the leading country-level market in the region owing to the increase in the number of installations of solar rooftop systems in the residential and commercial buildings. For instance, according to SolarPower Europe, the European Union installed around 8.0 GW of solar power systems in the region—a growth of ~20% in the year 2018.

The markets in Latin America and the Middle East & Africa are expected to register moderate growth in the years to follow owing to increasing research initiatives and constructional activities.Recent DevelopmentJan 2022 IntriEnergy Inc., a solar technology firm based in Naples, has reached a critical milestone in developing its unique DARK anti-reflective solar cell coating. This accomplishment brings the company one step closer to commercializing this game-changing technology in the $150 billion global solar sectors. DARK was able to minimize the amount of reflected light to below 2% due to IntriEnergy's newest round of development. IntriEnergy is improving the prototype to achieve near-zero reflectance of potential energy throughout a wider range of the solar spectrum (400 – 1,100 nanometers). As a result, IntriEnergy's technology will absorb the complete spectrum of sunlight, a significant step forward in the solar sector.Dec 2021 In preliminary testing, researchers proved that an affordable, clear coating minimized snow and ice formation on solar panels, allowing them to generate up to 85 percent more electricity. According to the experts, the advancement could significantly boost the production of solar panels in cold climates. PDMS or PVC plastic and silicon or vegetable-based oils are used to produce the coating. In cold weather, it can be spewed or brushed on, and in its current form, it can keep sloughing snow and ice for up to a year.

What percent CAGR is the market expected to attain in the years ahead?

The market is expected to attain a CAGR of 22.8% in the years ahead.

What are the key types of solar panel coatings?

Which application-wise segment is believed to take the lead in the market?

The commercial segment, depending on application, is believed to take the lead in the market.

Which regional market is expected to be the most lucrative one in the world?

The APAC market is expected to be the most lucrative one in the world.

Hydrophobic Solar Panel Coatings Due to its Exceptional Properties is Expected to Witness Healthy...