The Solar Control Window Films Market is projected to witness healthy growth at a CAGR of over 9.60% to reach USD 6.6 Billion by 2021-2030. Solar Control Window Films are very thin polyester-based films, some of which are non-metalized and others that are coated and laminated with various types of metals that are primarily employed in the building and construction, and automotive industries. Window films are typically put on the interior side of glass panes or windows in homes, offices, hotels, autos, and airplanes. As a result, these films reduce heat gain, block UV rays, and restrict the amount of visible light and glare that enters the room/vehicle.

Solar control window films come in a variety of colors, thicknesses, grades, and finishes, as well as a variety of uses like thermal insulation, heat reduction, UV filtration, privacy, and security giving you a wide range of performance and aesthetic options. The building and construction sectors, as well as the automobile industry, are the primary users of these films on the market. The market is growing because of the rising usage of solar control window films in residential and commercial buildings, which results in higher energy savings and lower carbon emissions. Another important element driving market expansion is the increased usage of solar control films in automobiles.

The prominent factors driving the growth of the global market are the high demand for solar control window films in residential and commercial buildings and the expanding automotive industry in the developing economies. Commercial and residential solar films are long-lasting and durable films aiding in tackling various problems such as heat, energy loss, and glare in commercial, institutional, and residential buildings. Solar heat can be a major issue for any property with outward-facing windows. Solar control window films will prevent the steady heat build-up from occurring due to the sunlight streaming through the glass, resulting in a more stable and moderate temperature. Energy efficiency is also achieved as the decline in heat results in lower energy consumption for air conditioning and cooling. With environmental pressures and rising energy costs, the demand for solar control films is increasing, meeting the ongoing requirement of improved energy efficiency. Moreover, these films block up to 99% of the suns’ harmful UV rays, thus help combat fading and avoid skin damages.

Environmental concerns such as fuel efficiency and CO2 emissions reduction are among the most important issues that the automotive industry has been facing in recent years. Automotive solar control films are used as a drop-in solution that helps lower interior temperatures quickly, cooling the passenger cabin and minimizing the strain on the air conditioner, thus improving fuel efficiency. The metallic coating on the films reflects heat-causing infrared (IR) rays without impairing visible light transmission and reduces solar heat gain. Moreover, the rising concerns over skin damage due to harmful solar UV rays are driving the demand for such films in the automotive industry.

Based on type, the global solar control window films market is segmented into dyed, vacuum, clear, and others. Among these, the vacuum segment accounted for the largest market share of over 46% in 2019.

Based on absorber type, the global market has been segmented into organic, inorganic, and metallic. The organic segment accounted for the largest market share of around 45% in 2019, and it is projected to register a 9% CAGR during the forecast period.

By application, the global market is segmented into construction, automotive and transportation, marine, decorative, and others. Among these, the construction segment emerged as the leading and fastest-growing segment with a CAGR of around 10%. 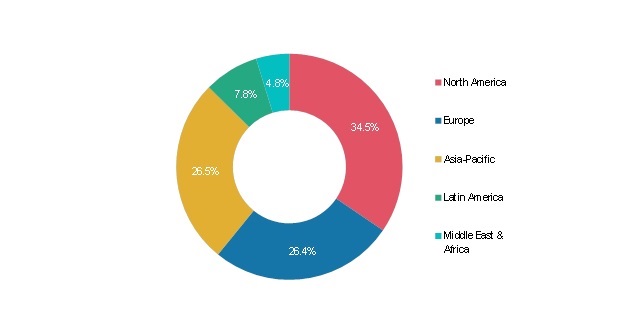 Solar Control Window Films Market has been studied across the five regions: North America, Asia-Pacific, Europe, Latin America, and the Middle East & Africa. The market in the North American region accounted for the largest market share of 34.4%. The high growth in this region is attributed to rising infrastructural development.

Asia-Pacific emerged as the fastest-growing market, exhibiting a 10.9% CAGR during the assessment period. The growth in this region is attributed to the rapid industrialization and commercialization in economies such as India, Thailand, and South Korea. As per Invest India, the construction market in India is expected to become the third-largest worldwide and is projected to register a 5.6% CAGR from 2016 to 2020. The rising demand for commercial space due to the growth of service sectors such as information technology, banking, financial services and insurance, and telecommunications is leading to increased construction, which is driving the growth of solar-controlled window films in the regional market.


With the support of a new distributor, Decrastrip, Avery Dennison Corporation announced the strengthening of its New Zealand distribution network for architecture solar and safety window films in July 2019. This expansion will allow the company to better serve clients throughout New Zealand with its current offerings.

Growing demand for temperature regulating windows is likely to be the major driver for the solar control window films market.

North America is the largest regional market for solar control window films due to the widespread awareness in the region.

Leading players in the market include 3M, The Window Film Company, and Eastman, among others.

widespread use of Solar Control Window Films in the Construction Industry is expected to Propel t...