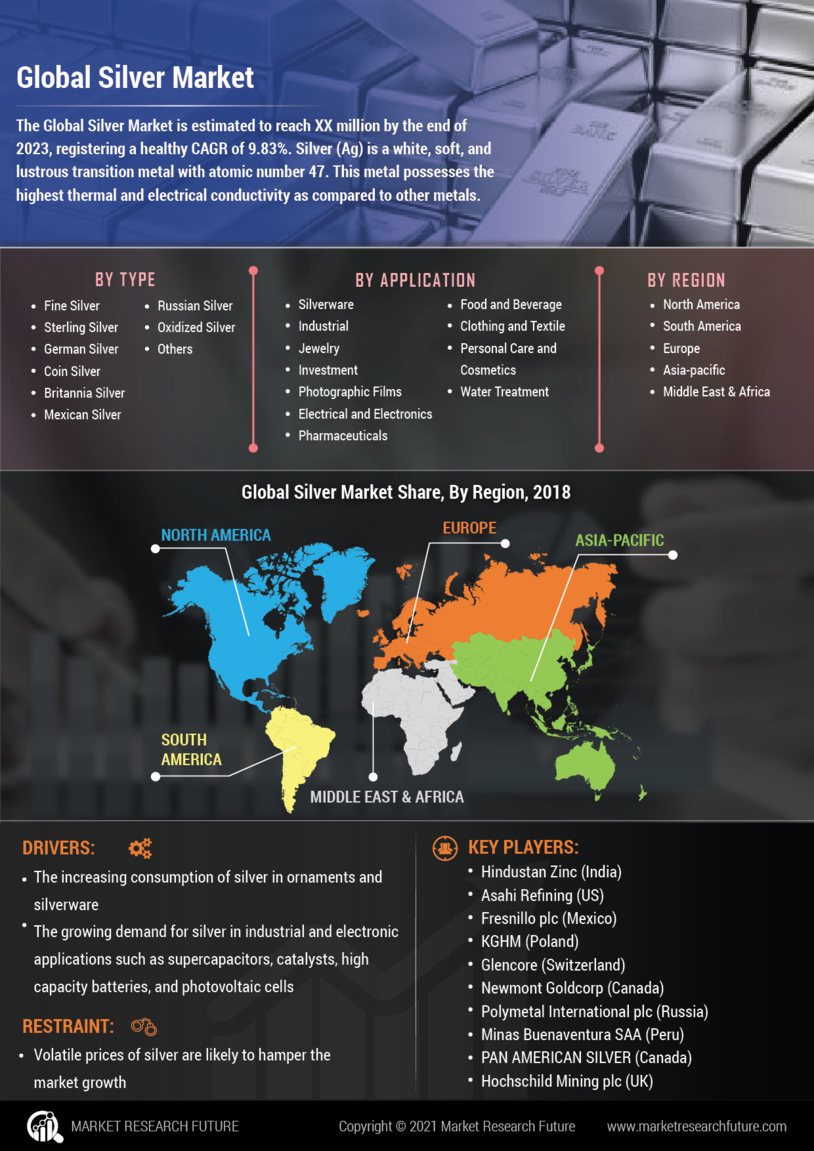 Silver (Ag) is a white, soft, and lustrous transition metal with atomic number 47. This metal possesses the highest thermal and electrical conductivity as compared to other metals. In addition, it exhibits high reflectivity, malleability, and ductility. It is harder than other precious metals and is obtained either from the earth’s crust as an alloy with gold and other metals, or from minerals, e.g., chlorargyrite. In many cases, silver is produced as a byproduct of gold, zinc, copper, and lead refining. It is one of the precious metals and finds application in jewelry, silverware, and photographic films, among others. Unlike other precious metals, silver is easily oxidized to form an oxide layer on silverware and jewelry.

According to MRFR analysis, the silver market is estimated to reach XX million by the end of 2023, registering a healthy CAGR of 9.83%. The increasing consumption of silver in ornaments and silverware is expected to be the major factor driving the global market growth. Also, the growing demand for silver in industrial and electronic applications such as supercapacitors, catalysts, high capacity batteries, and photovoltaic cells is also expected to boost the market growth. Moreover, silver finds applications in dentistry as silverware, optics, and mirrors which is likely to drive the growth of the market in the following years. Silver is the cheapest among other precious metals and exhibits similar properties of luster and rarity, which make it perfect for use in the manufacturing of jewelries. Silver as an investment is considered to be one of the opportunities for the growth of the silver market over the past decade, and this trend is likely to continue during the review period. Furthermore, silver is considered as an affordable alternative to gold, which further creates immense opportunities for the market players operating in the market.

However, volatile prices of silver are likely to hamper the market growth in the coming years. Moreover, silver is reactive and gets easily tarnished when in contact with hydrogen sulfide, ozone, and air with ozone content which affects its appearance and thus acts as another major restraint to the market growth. 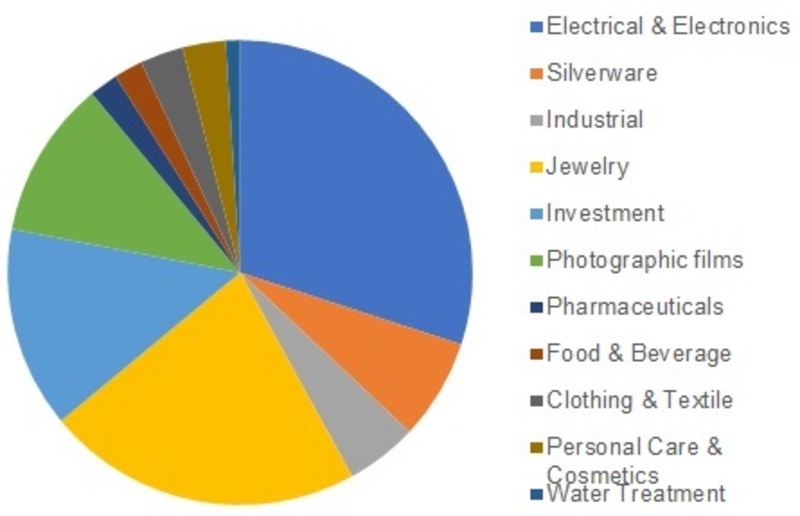 The Latin American market held the largest market share in 2018 and is projected to continue this trend in the coming years owing to the presence of large silver mines. Mexico is the leading country in the world owing to the presence of the largest silver mines possessing higher grades. The mine supply from this country increased to as high as 6,116 tons following a robust performance of the primary and gold sectors. Peru is another prominent country in the region and mined around 4,508 tons of silver in 2018, though it showed silver production drop by 2%. The North American market accounted for the second-largest market share in 2018 and is projected to register the highest CAGR during the forecast period owing to the increase in mining activities in the lead, gold, and zinc mines in the region. The Asia-Pacific market is projected to exhibit a significant CAGR in the coming years owing to rising mining activities and growing demand for silver in jewelry and industrial applications. China is the leading country in the region, followed by India owing to the growing demand for silver in the manufacturing of ornaments and coins. The European market held a substantial market share in 2018 and silver production in the region increased by 1% in 2017, which is the first increase in silver production rate after three consecutive years of downfall. Russia is the major contributor to the regional market growth followed by Poland. The Middle East & African market held a small market share in 2018 on account of the low purity of silver mines.

The global silver market has been segmented based on type, application, and region.

Based on application, the global silver market has been classified into silverware, industrial, jewelry, investment, photographic films, electrical and electronics, pharmaceuticals, food and beverage, clothing and textile, personal care and cosmetics, and water treatment.

The global silver market, by region, has been studied for five key regions—Asia-Pacific, North America, Latin America, Europe, and the Middle East & Africa.

At what CAGR is the global Silver market projected to grow in the forecast period (2018-2024)?

Silver market is projected to grow at approximately 9.83% CAGR during the assessment period (2018-2024).

Which is the largest application segment in the global Silver market?

Electrical and electronics is the largest application segment in the global Silver market.

Which is the leading country in the global Silver market?

Mexico is the leading country in the global Silver market.

Which region holds the largest share in the global Silver market?

Latin America holds the largest share in the global Silver market, followed by North America and the Asia Pacific, respectively.

Who are the top players in the global Silver market?

Silver Market Is Increasing Application, Huge Growth And Likely To Boost Demand Over 2023