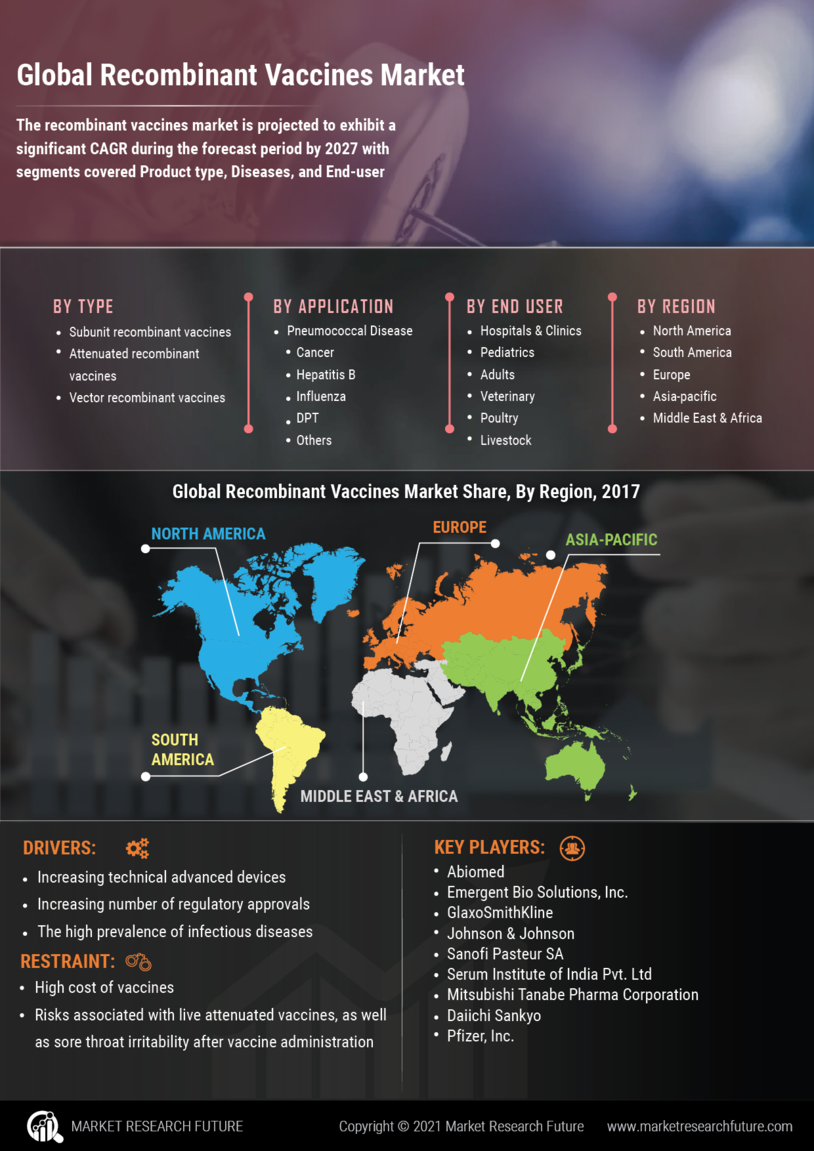 The Recombinant Vaccines Market is anticipated to reach USD 1,146.2 Million by 2030 at 6.30% CAGR during the forecast period 2022-2030. Vaccines that are produced using the recombinant DNA technology or genetic engineering are called recombinant vaccines. The recombinant vector vaccine strategy enables triggering of T- cells and antigens, thus generating a strong cell-mediated immune response in the body against that particular immunogen.

The market is majorly driven by increasing technical advanced devices, increasing number of regulatory approvals, the high prevalence of infectious diseases, and growing penetration of key market players. Furthermore, raising awareness of healthcare, favorable reimbursement policies, increasing innovations in research and development of drugs, and vaccines, as well as rising average income of individuals, are fueling the recombinant vaccines market growth. However, factors such as high cost of vaccines, risks associated with live attenuated vaccines, as well as sore throat irritability after vaccine administration and stringent regulatory policies are likely to hamper the growth of the market. Lack of proper health care infrastructure, as well as awareness regarding pathogen-related diseases in middle-income countries, are a major challenge to the market growth.

Considering the disease type, the market is segmented into pneumococcal disease, cancer, hepatitis B, influenza, DPT, and others.

On account of the end-user, the market is segmented into hospitals & clinics, pediatrics, adults, veterinary, and others. Veterinary is further segmented to poultry and livestock.

Americas is the global leader in recombinant vaccines market owing to increasing advances in molecular biology and genetic engineering techniques as well as increasing prevalence of infectious diseases.  Additionally, factors such as increasing government initiatives and funding for research, development of advanced medical treatment options, and rising demand for technologically advanced treatment are likely to enhance the growth of market in the American region. For instance, According to stats presented in the Centers for Disease Control and Prevention report in the year 2017, around 49.9% of the children between the ages of 6 months to 17 years in the U.S. received an influenza vaccine. Due to the alarming rate of diseases associated with opportunistic pathogen developed countries are introducing compulsory immunization program. Raising global burden of cancer has also led a lot of key players to invest their time and money to come up with solutions to curb this problem. For instance, The vaccine therapy with or without trastuzumab as well as GM-CSF vaccine for the treatment of breast cancer is in phases II clinical trial. Green signal from regulatory bodies for these vaccines will further boost up the recombinant vaccines market growth

Europe is the second largest market and holds a healthy share in the market due to major driving factors like availability of advanced treatment facilities, increasing healthcare expenditure along with an alarming rate of cancer and infectious diseases. Furthermore, Lots of established key players in this region export their products to the developing nation. For instance, the European Commission stated that the R&D spending by the pharmaceuticals and biotechnology sectors grew by 8.7% in 2014. This investment in R&D along with the ongoing legislative reforms is expected to have a positive impact on the recombinant vaccines market.

Asia Pacific is expected to be the fastest growing market owing to the faster adaptation of healthcare technology, increasing inpatient pool due to cancer and infectious diseases, government initiatives to increase the healthcare quality, favorable insurance, and reimbursement policies. Key players have set up their regional headquarters and manufacturing plants in Singapore, China, Japan, Korea, and Australia thus, boosting the growth of market. Government is also taking several initiatives to spread awareness in the low-income areas. National Immunization Program In India has helped people below the poverty line get immunized against polio as well as DPT. However, on the other hand, factor such as lack of skilled healthcare professionals may slow down the recombinant vaccines market growth during the forecast period.

The Middle East and Africa is expected to show the least growth in the market due to some major factors such as lack of awareness, limited access and availability of treatment facilities. In the Middle East, United Arab Emirates is the largest market share owing to the development of healthcare industry and rising availability of specialty care centers. However, this area has the possibility to grow during the forecast period as due to increasing outbreak of new opportunistic pathogen associated diseases like Ebola, Zika Virus, and Hepatitis B government along with some key planners have set up their R&D centers in this region.

What is the growth rate of the global recombinant vaccines market?

Who are the major players of the global recombinant vaccines market?

What are the restraining factors of the global recombinant vaccines market?

High costs of vaccines and huge risks associated with attenuated vaccines are factors which can hamper the global recombinant vaccines market.

Which region can dominate in the global recombinant vaccines market?

The global recombinant vaccines market is led by the Americas due to rapid strides in molecular biology in the region.

What are major drivers of the global recombinant vaccines market?

High prevalence of diseases and large number of approvals are major drivers of the global recombinant vaccines market.

Recombinant Vaccines: The increasing prevalence of cancer is likely to drive the growth of the gl...