According to MRFR analysis, the Phosgene Market is estimated to reach USD 2.34 billion by the end of 2030 at a healthy CAGR of 4.60%.

According to MRFR analysis, the Phosgene Market is estimated to reach USD 2.34 billion by the end of 2030 at a healthy CAGR of 4.60%.

Phosgene is a colorless gas with chemical formula COCl2. It has an unpleasant odor and is found in trace amounts in volcanoes. It can be manufactured synthetically and is highly toxic, owing to which it was used as a chemical weapon during major wars across the globe. It is a significant industrial agent widely used as a building block in the preparation of many organic compounds and medicines. At ambient temperature, it is considered as a poisonous gas, but when cooled at high pressure, it can be converted into a liquid for easy transportation.

Toluene diisocyanate and methylene diphenyl diisocyanate are the prominent isocyanate derivatives produced from phosgene which is primarily used in bedding and upholstery applications. Growing demand for bedding and furniture sectors owing to the increasing population and rising purchasing power is likely to drive the market growth. Moreover, increasing consumption of the product in pesticides and insecticides is expected to further boost the market growth in agrarian economies of Asia-Pacific. Furthermore, increasing demand for phosgene in the preparation of medicinal products coupled with increasing demand for better medical facilities is expected to propel the global market growth. Phosgene and its derivative find widespread applications in dyes, specialty chemicals, pharmaceuticals, and agrochemicals, among others. The rapid expansion of various end-use industries in developing countries is likely to create lucrative opportunities for market players.

However, stringent governmental regulations on the toxicity level of phosgene along with the threat of non-toxic substitutes are expected to hamper the global market in the following years. 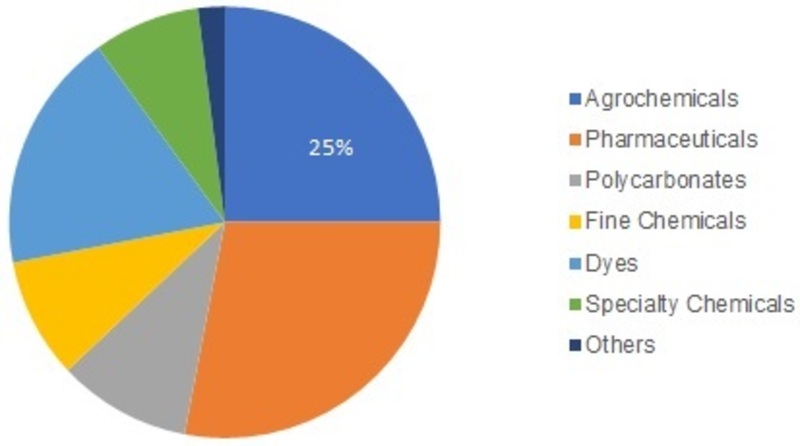 The Asia-Pacific market is expected to dominate with the highest CAGR during the forecast period. This is largely attributed to the growing end-use industries such as agriculture, automotive, and pharmaceuticals. Increasing consumption of phosgene in agrochemicals, dyes, and medicines is likely to propel the regional market growth. High demand for phosgene is predicted to surge in various developing countries of Asia-Pacific such as India, China, and Malaysia owing to wide consumption of phosgene derivatives in bedding and furniture; and agrochemicals applications. Factors such as easy availability of raw material, low labor and land cost, and increasing R&D innovations to reduce the toxicity of phosgene are further anticipated to boost the regional market growth. The European market held the second-largest market share in 2018 owing to the high consumption of phosgene in pharmaceuticals, dyes, and specialty chemicals applications. Germany is the leading country in the region followed by Spain, Italy, and France on account of growing expenditure on R&D and product innovation. However, a stringent regulatory framework on the toxicity of phosgene is likely to hinder the regional market growth in the coming years. The North American market accounted for a substantial market share in 2018 and is likely to grow at a moderate CAGR during the assessment period owing to the recovery of the industrial sector combined with increasing investments in textile and healthcare sectors.

Moreover, continuous expansion of the medical sector and increasing demand for phosgene in pharmaceutical products is further anticipated to propel the regional market growth. The Latin American market is likely to grow at a notable CAGR during the review period owing to the growing consumer spending on textile products and increasing usage of phosgene on dyes. Brazil, Argentina, and Mexico are the regional contributors. The Middle East & Africa market is expected to register moderate CAGR in the coming years owing to the growing investments in residential and commercial construction in the region. Turkey, Saudi Arabia, and UAE are the prominent countries in the region.

The Phosgene Market has been segmented based on Derivatives, Application, and Region.

On the basis of Derivatives, the Phosgene Market has been categorized as isocyanates, chloroformates, carbamoyl chlorides, and others.

Based on Application, the Phosgene Market has been classified as agrochemicals, pharmaceuticals, polycarbonates, fine chemicals, dyes, specialty chemicals, and others.

By Region, the Phosgene Market has been studied for five key regions—Asia-Pacific, North America, Latin America, Europe, and the Middle East & Africa.

September 2021 - ALTIVIA Specialty Chemicals, the largest manufacturers of Phosgene derivative intermediates across the American region, disclosed that the firm had traded its water treatment chemical business to USALCO, L.L.C., a portfolio company of H.I.G. Capital.
This water treatment business by ALTIVIA includes ferrous and ferric sulfate production facilities located in Houston, Texas.
The Chief Executive Officer at ALTIVIA, J. Michael Jusbasche, said that as the firm becomes centered in petrochemicals and specialty chemicals, they are happy to pass the ownership of the water treatment business to USALCO. He further added that the deal is a highly profitable result for the customers and employees. They believe that the business will flourish as an element of USALCO's growing footprint in water treatment.

May 2021- Britain has decided to spend over USD 40.6 million, i.e., 33.8 million euros, on the latest coronavirus vaccine laboratories as an attempt to safeguard the country from the further threat of new variants. The latest labs at the Porton Down research plant in southwest England will be utilized to examine the efficacy of vaccines against variants and boost up their installment.
The Defence Science and Technology Laboratory, founded in 2016, has over 3,000 scientists working in a sprawling rural site. The laboratory was established to deal with German chemical attacks in World War I that, in the beginning, included chlorine and then phosgene and mustard gas.

Phosgene is a colorless gas with the chemical formula COCl2. It is toxic to humans, but is widely used in the preparation of several industrial compounds and medicines.

What is the valuation of the phosgene market?

The phosgene market is expected to rise to a valuation of USD 2.34 billion by 2030.

What is the CAGR of the phosgene market?

The global phosgene market is expected to exhibit a solid 4.60% CAGR over the forecast period from 2021-2030.

What are the major drivers for the phosgene market?

What are the key restraints on the phosgene market?

Government restrictions on the use of phosgene, which is toxic to humans, are likely to be the key restraint on the global phosgene market over the forecast period.