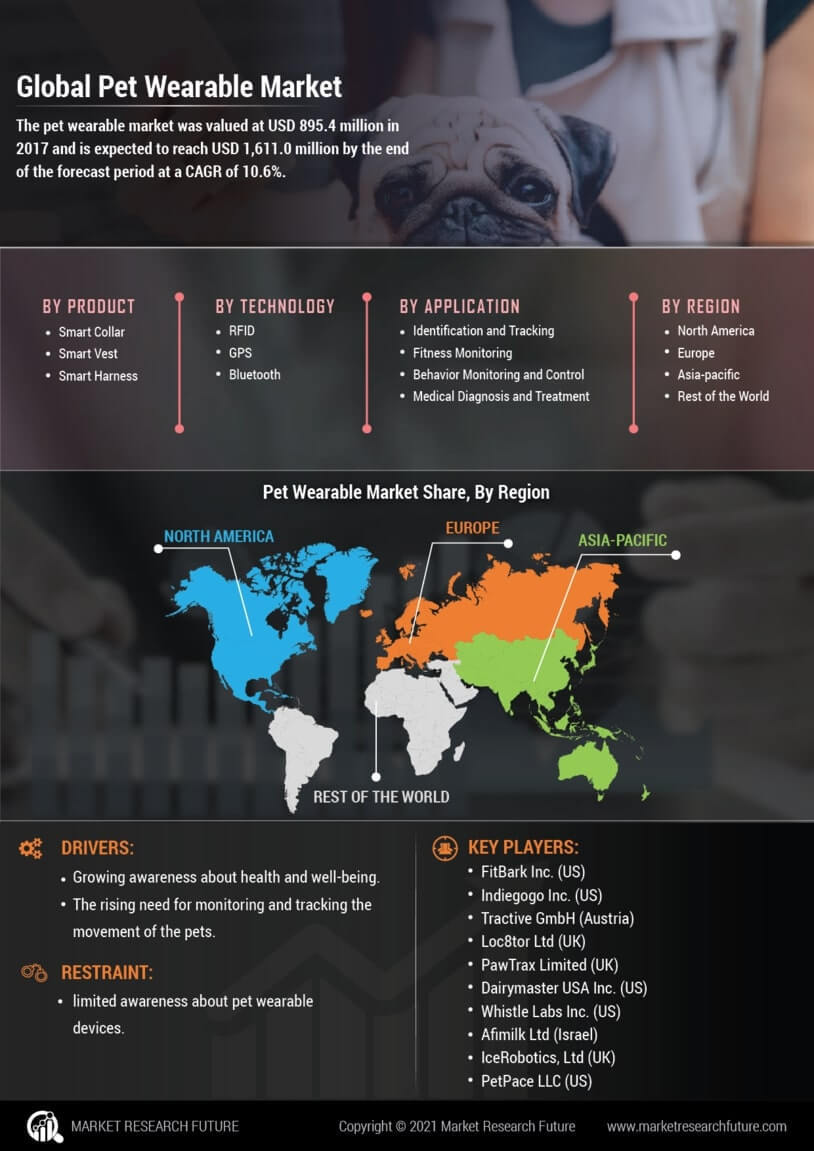 Globally, the size of the Pet Wearable Market is set to grow at a CAGR of 10.6% from a value of USD USD 895.4 million in 2020 to hit USD USD 1611.0 million by 2024 driven by the Growing awareness about health and well-being.Hence, it can be stated that the basic importance of the Pet Wearable Market. Apart from that, it has been observed that these particular devices operate on the basic wireless activity with a connectivity of the Bluetooth pairing. The maximum application of the particular device has been depicted to have a significant growth within the forecast period 2024. Apart from that, the major contributing factors that rose to the awareness of the human beings and connectivity to health issues and wellness.

The driving factors of Pet Wearable Market have been eliminated and it addresses that the usage of the pet wearable devices has been forecasted in the concise period. Therefore, the major outbreak of the country or rather the region has been analyzed according to the driving factors that includes mainly the key players or the major players. Therefore, the major players have been well adverse and it has been well dominated by the GPS services. This regulates the heat pattern that monitors the major growth of the sensing machines along with the heat pattern of the animal's body.

The major opportunity derived by the machine or rather the pet wearable device market has been the increase in adoption of the connected devices that bears the wellness of the human body. Apart from that, the internet of things has been gathered which makes a gain of the meaningful insights for the proper growth in the future hand of the futuristic growth. Therefore, this appreciates the wellness of the body growth and has addressed that wearable device has the advantage of getting linked with the smartphone application as well.

The major restraint factors that include has been well addressed and it holds the largest growth of the smart collar and its well awareness of the Pet Wearable Market during the forecast period. According to the forecast period, it has been depicted that the smart collars have been attributed with the features that mainly derives the proper alliance of the maintained distance.

One of the biggest or rather the limited limitations of the Pet Wearable Market has been calculated that states that the pet wearable device has been well lacking in the insights. However, it has been analyzed that the major constraints have been the healthcare attention and the animals in the rest of the world. This initiates the importance of the region that mainly poses the challenges of the pet wearable market's biggest growth.

The value chain analysis of the Pet Wearable Market has been well adverse and this mainly stares at the importance of the advancement of the technological appliances. Hence, the major key players of the country mainly portray the health-related patterns or the respiration level. This initiates the overall value of the check actions of the disease within the human body or animals.

According to the global report, it has been detected that the overall segmentation of the Pet Wearable Market has been based upon the region, application and the technological products. Hence, this states that the product of the pet wearable has been aligned in the smart collar, small harness, and smart vest. Apart from that, it has been addressed that the technological application of this particular device has been mainly forecasted on the RFID, GPS and Bluetooth. Hence, the segmentation of the region has been well adverse and it mainly distributes in Europe, North America and Asia Pacific as well. However, the application has relied upon the identification of the fitness monitoring, tracking and behavioral treatment along with the medical diagnosis of the treatment.

The regional analysis of the global pet wearable has been estimated with a growth rate at a significant rate. Hence, this initiates the overall growth of the forecast from 2019 to 2024. This portrays that the geographic analysis has been conducted in the different regions for the better understanding of the Pet Wearable Market trends. Therefore, it can be depicted that North America dominates the market holding of the Pet Wearable Market share in a significant position. This initiates the adoption of the pet along with the increased growth in the disposal income of the North America residents. Hence, the various pets have been averse with an affected position with a capability of tracking and it has been inherited with the rise in the health lifestyle of the pets.

According to the overall landscape, there has been a list of the companies that have a positive competition in the region. Hence, the key players of the stated margins appear to be listed down.

This particular report is entitled to provide all the important facts and information regarding the trends of the largest market share of the pet wearable margin within the forecast period. Apart from that, the different section has been available that helps to get within the depth information that includes mainly the opportunities, drivers, challenges, regional analysis, covid 19 analysis. Market segmentation, and others. Therefore, all of the facts collected have been from the primary and the secondary sources that are entitled to provide information regarding the display of the technologically advanced devices screens in the future growth of the Pet Wearable Market.

What is the estimated market size of the global pet wearables market?

The global pet wearables market is flourishing and expected to acquire nearly USD 1611 million by the end of the forecast period.

Who are the top players in the Pet Wearable Market?

What is the primary driving factor for the growth of the global pet wearables market?

The primary factor backing to the growth of pet wearable devices is the growing awareness about their health and well-being.

Which product segment is expected to record the highest growth?

On the basis of the product, the smart collar is poised to witness substantial growth.

Which region of the global pet wearables market is expected to witness the largest market share?

North America is expected to dominate the pet wearable market in terms of revenue generation, and acquire a substantial market value over the forecast period.

At what growth irate is the global pet wearables market poised to expand?

The global pet wearables market is expected to mature at an approximate CAGR of 10.6% through the review period.

The Global Pet Wearable Market is Expected to Grow Significantly During the Forecast Period (2019...