The pepper spray market size is projected to reach approximately USD 58.7 million by 2028, at a CAGR of 5.83% from 2021 to 2028. Pepper spray is also called as Oleoresin capsicum (OC). It is a non-lethal personal safety weapon. It is majorly used for personal defenses and for controlling crowd and criminals. Pepper spray can help in stopping one or more attackers.

Pepper spray is also used for the protection from deadly animals such as beer, rhinos, and tigers. The acceptance and popularity towards pepper spray is increasing tremendously from past few years among police agencies and law enforcement officers as a safe and effective method of incapacitating violent or threatening subjects. Pepper sprays are available in a various concentration. There are various physical effects of being sprayed with pepper spray which might significantly reduce an individual’s aggressive behavior. Law enforcement agencies have reported that pepper sprays work on individuals who are extremely agitated and excited, under the influence of alcohol and drugs, and mentally impaired. According to the FBI's Forensic Science Research and Training Center there are no long-term health risks associated with the use of pepper spray. This makes it a decent weapon for self-defense, thereby creating opportunities for the market in the coming years.

The impact of COVID-19 has affected negatively on the distribution and sales of different products across several industries. Many countries are under lockdown and have sealed their borders to control the spread of the virus. The impact of COVID-19 on logistics has disturbed the supply of raw materials. Owing to this, the production capacity has decreased and, thus, there is shortage of products. These factors are expected to cause a price rise of products in short run.

The supply chain of the pepper spray market comprises manufacturers, distributors, and end user. The COVID-19 pandemic has impacted the supply chain, as many countries are under lockdown and have sealed their borders to control the spread of the virus. The global economy is struggling with the pandemic situation currently. Due to this, it has impacted on the global pepper spray market. The impact is growing owing to the rapid weakening of global investment flows. Moreover, government has imposed strict containment and preventive measures in several countries for controlling the impact of the outbreak. This has led to a significant restriction in transportation, driving a knock-on effect globally. These effects are expected to continue owing to the uncertainty in the global market and measures to address the supply/demand imbalance.

Moreover, Chicago’s crime declined 10% after the pandemic, in 2020. Additionally, the US virus epicenter in New York reported major crimes such as rape, murder, burglary, robbery, assault, car theft, and grand larceny decrease by 12%. Moreover, in Los Angeles, key crimes statistics dropped by 30% by March 2020. In South Africa, police reported a striking decline during their first week of lockdown measures. It was reported that rapes were down from 700 to 101. Also, serious assault cases plummeted from 2,673 to 456, and murders fell from 326 to 94. This created a challenge for the pepper spray market.


Increasing number of crimes, such as eve teasing, rape, kidnaping, murder, and human trafficking, is the key factor encouraging people for buying pepper sprays. There are numerous weapons or gadgets are used for personal defense such as self-vigilant alarm, pocketknife, silver self-defense key cases and aluminum baseball bat. However, among these weapons or gadgets, pepper spray is the primary choice for women as it is one of the most common and effective defense weapons. It is easy to carry and use as compared to other weapons. A bottle of pepper spray is compact in size and will easily fit into any handbag.


Pepper spray has some adverse effects such as when pepper spray meets a person’s eyes, it causes acute eye pain, and temporary blindness. There is a boiling or bubbling sensation and severe discomfort. Pepper spray can also cause shortness of breath or an inability to breathe properly, dry cough or wheezing, chest pain, throat burning, a runny nose, gagging, gasping for air, an inability to speak, panic, loss of consciousness, dizziness, blisters, rashes, and burns on contact with the skin. This can be a restraining factor for the growth of global pepper spray market.


According to the data published by the National Crime Records Bureau, the cases of violent abuse of women have gradually increased since 2009. The number of such cases has increased by over 50%, by 2013. As per the recent report published by National Center for Biotechnology Information, as per 2016, 93 rapes were reported every single day in India. Owing to this, the awareness regarding self-defense has increased enormously over the past few years. Along with this, awareness regarding pepper spray as a weapon for self-defense for women has been increasingly accepted by the population. This creates immense opportunity for the market for the forecast period.

There are various types of hot pepper extracts used as raw material to produce pepper sprays. The most used aggravation agent in the production of pepper sprays is the oleoresin capsicum (OC). The nonivamide (pelargonic acid vanillylamide or PAVA) is a substitute substance for OC. Some manufacturers use it to produce pepper sprays instead of OC or capsicum extracts. This process of raw material procurement of the value chain delivers value of nearly 30% to the whole chain.

The active ingredient in pepper spray is capsaicin, which is needed to be extracted to produce pepper sprays. The extraction of oleoresin capsicum (OC) from peppers needs capsicum to be finely ground, from which capsaicin is then extracted with the help of an organic solvent such as ethanol. The solvent is then evaporated, and the remaining waxlike resin is the oleoresin capsaicin. Later, for suspending OC in water, an emulsifier such as propylene glycol is used. The suspension is then pressurized for making the pepper spray. Processing stage accounts for 31–85% of the total value of the product.

The packaging is a crucial step in the value chain of any product. Pepper sprays are usually packed in spray bottles of different quantity. The value of this segment is nearly 86–100% 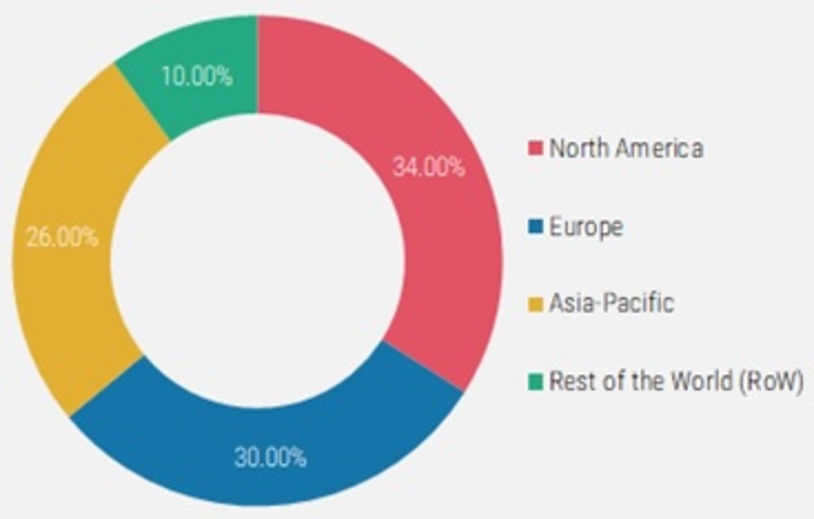 By region, the global pepper spray market has been divided into North America, Europe, Asia-Pacific, and the Rest of the World. North America accounted for the largest market share of 34.00% in 2020. Asia-Pacific is projected to exhibit the highest CAGR of 6.35% during the review period.

North America is the largest market in 2020 and is expected to experience a decent growth rate during the forecast period in the global pepper spray market. In North America region, the US holds the largest market share. The major players operating in the market are based in the region. Such as Mace Security International Inc. is an Ohio based manufacturer of security, personal defense, and surveillance products. According to the President and Chief Executive of Mace Security about 75 percent of company's sales are domestic.

The market comprises tier-1, tier-2, and local players. The tier-1 and tier-2 players have reach across the globe with diverse product portfolios. Companies such as Mace Security International, Inc (US), Plegium Inc. (US), and Zarc International Inc. (US) dominate the global pepper spray market due to product differentiation, financial stability, strategic developments, and diversified regional presence. The players are focused on investing in research and development. Furthermore, they adopt strategic growth initiatives, such as expansion, product launches, joint ventures, and partnerships, to strengthen their market position and capture a large customer base.


Objectives of the Study

To identify and estimate the market size for global pepper spray market segmented by product type, category and distribution channel by value (in US dollars). Also, to understand the consumption/ demand created by consumers of pepper spray during the period of 2019-2028

To identify and infer, the drivers, restraints, opportunities, and challenges for the global pepper spray market

To provide a detailed insight on the major companies operating in the market. The profiling will include the financial health of the company past 2-3 years with segmental and regional revenue breakup, product offering, recent developments, SWOT analysis, and key strategies.

What is the growth rate of global pepper spray market?

The global pepper spray market is growing at a CAGR of ~5.83% over the next 7 years

Asia Pacific is expected register the highest CAGR during 2021 - 2028

Which region has largest share in global pepper spray market?

Who are the key players in global pepper spray market?

Mace Security International, Inc (US), Plegium Inc. (US), and Zarc International Inc. (US) are the major companies operating in global pepper spray market.