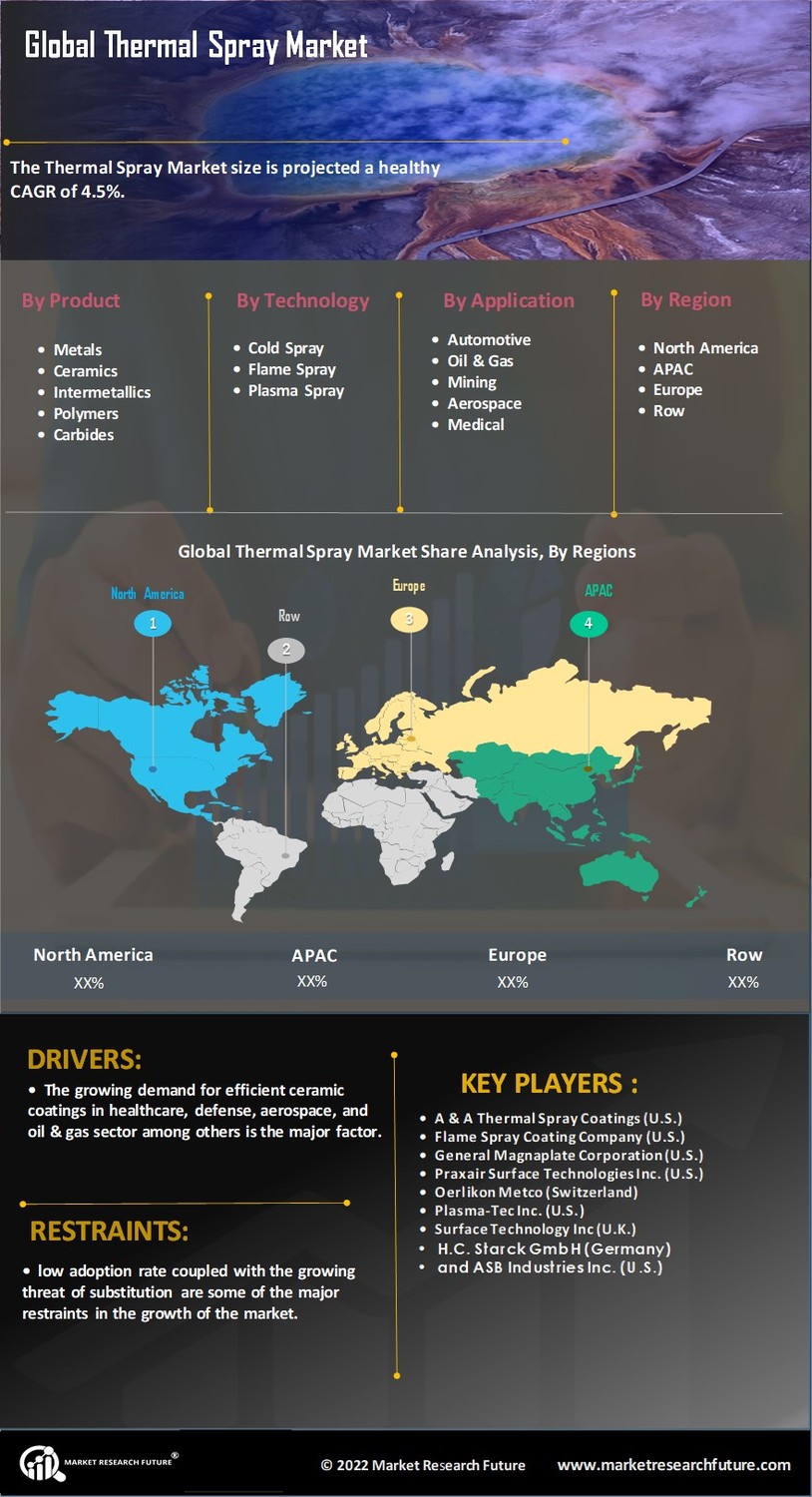 Thermal Spray Market Overview Thermal Spray Market is projected to be worth USD 17.68 Billion by 2027, registering a CAGR of 8.0% during the forecast period (2021 - 2027). Thermal spraying is a coating procedure that involves the creation of semi-molten and molten substrates in an industrial setting. Thermal spraying produces thicker coatings (up to 20 mm) and a faster deposition rate than other coatings across a vast area. Metals, ceramics, polymers, intermetallic, carbides, abradable, and other substrates are all coated with these sprays for protection or decoration. They are a potential substitute for other coatings due to qualities such as improved engineering performance, higher shelf life, and inexpensive coating cost. The rising use of thermal spray coatings in medical devices, the rising popularity of thermal spray ceramic coatings, and the rising use of thermal spray coatings in the aerospace industry as the major drivers of the thermal spray market. The market is largely driven by increasing demand from end-user sectors such as aerospace, autos, oil & gas, steel, medical, and printing, among others. Low adoption rates, combined with the growing threat of substitution, are two main limitations on the market's growth. The increased demand for efficient ceramic coatings in industries such as healthcare, defense, aerospace, and oil and gas is a major factor driving market expansion. Metals are the second-largest product category. The increasing use of metals in numerous industries has increased the demand for coatings, which has contributed to the segment's growth. 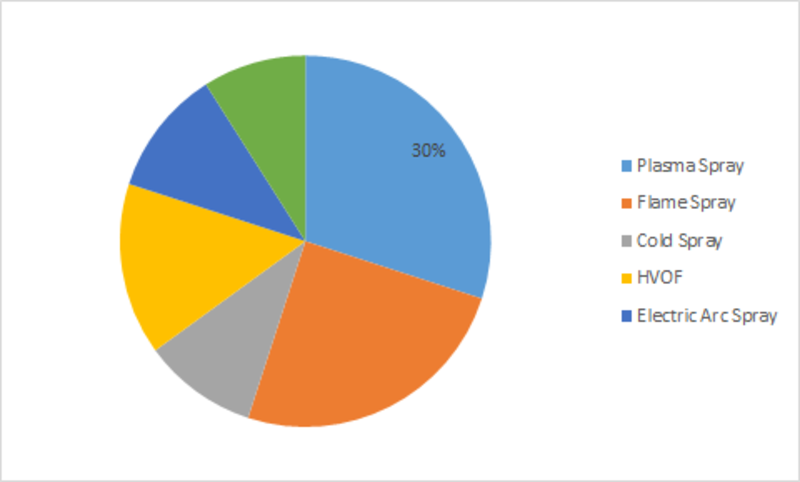 The thermal spray market is segmented into five regions: Latin America, the Middle East & Africa, Asia Pacific, North America, and Europe.  Among these, Asia is expected to be the fastest growing region with an encouraging CAGR. Growing population and the increasing per capita disposable income in the developing nations are primarily driving the growth of the thermal spray market. Moreover, the propelling aerospace and the automobile industry in countries such as India and China, is increasing the demand for thermal spray. Moreover, the growing demand from the oil and gas industry mainly in China, India is another factor positively affecting the market growth. The growing population has augmented the need for energy in the region which has resulted in a surge in oil and gas activities, thereby increasing the demand for a thermal spray for the use in bearings, pump shafts, hydraulic plungers and other applications. North America is the largest market and is expected to retain its dominance during the forecast years.  The developed industries such as aerospace, automobile, and pharmaceuticals among other are positively affecting the market growth.  The European region is a lucrative market and is mainly driven by a well-developed automobile and aerospace industry. Moreover, the growing oil and gas related activities mainly in Russia is expected to surge the market growth, Europe is expected to show a CAGR of over 5.5% during the forecast years.


Hoganas Product Area Surface and Joining Technologies (SJT) and Lincotek Surface Solutions announced an agreement in September 2020 to extend their ongoing partnership in the development of thermal spray and surface technology products and coatings. Praxair Surface Technologies (PST), a Linde Company, and Siemens AG signed a new partnership in March 2020. PST's aluminizing, platinum aluminizing, slurry, and thermal spray technologies will be used to coat Siemens goods such as aerospace and industrial gas turbine components under the new contract.

What is the main advantage of thermal spraying?

Thermal spraying provides thick coatings up to 20 mm over a large area and deposition rate than other coatings. These sprays are used for a protective or decorative coating in many substrates including metals, ceramics, polymers, intermetallic, carbides, abradable, and others.

Which technology-based segment to lead the thermal spray market?

The plasma spray segment would inspire better growth for the thermal spray market.

Which product segment to inspire the highest growth for the thermal spray market?

Ceramic is to register the highest growth for the thermal spray market.

What are the companies to inspire better growth for the thermal spray market?

Which region is to trigger the thermal spray market growth?

The Asia Pacific would dominate the global thermal spray market.

Which application-based segment to boost the thermal spray market?

Aerospace to lead the application-based segmentation of the thermal spray market.

Extensive Use of Thermal Spray from the End-User Industries is Projected to drive the Market Grow...