Paralleling Switchgear Market Research Report: Information by Voltage (Low Voltage, and Medium Voltage), by Application (Prime, Standby and Peak Shave), by End-Use (Commercial, Industrial, Utilities and Others) and By Region - Forecast till 2030

Paralleling Switchgear Market is expected to be valued at USD 1.97 Billion, with a CAGR of 5.5% Forecast by 2027

Paralleling switchgear market is expected to expand at ~ 5.5% CAGR during the forecast period.

Paralleling switchgear is meant for an operation in which two or more generators are usually synchronized and then connected to a common. The arrangement involves breaker and control compartments and can be deployed at various voltages. Paralleling switchgear includes breaker and control sections. These sections can be merged into a single line-up or deployed individually.

Moreover, this switchgear can either be of more medium voltage or medium voltage. It offers increased reliability and advantages like flexibility in load management, uninterruptible maintenance, and cost savings using segregated controls. It acts as an integrated system that protects meters, controls, and switches elements to regulate the distribution of power for the system, such as an optional standby system, critical operation power system, legally required standby by the system, and emergency system. These sets are mainly required in critical applications such as data centers and hospitals, where power cuts can lead to loss of life or a substantial financial loss.

Generator paralleling is a complex process. Its idea has changed drastically from the operator in the early 1970s to today’s autonomous microprocessor-based technology. The design engineers are expected to come forward with a comprehensive, reliable paralleling system, followed by a good understanding of how paralleling. Paralleling extends to synchronizing, de-energized bus arbitration, sync checks, load sharing, protection, metering, fault tolerance, and paralleling with the grid and other sources for drawing power. The critical market companies are witnessing the increasing demand from end-user industries such as construction, hospitals, and data centers are increasing the demand for the standby application, thereby driving the market growth despite having numerous advantages of paralleling switchgear, some factor restraints and challenges the market growth. However, the market has a long way to go when it comes to the high cost and availability of other alternatives are the primary factor expected to hamper the market growth. Increased investments and technological advancements for the market are helpful. 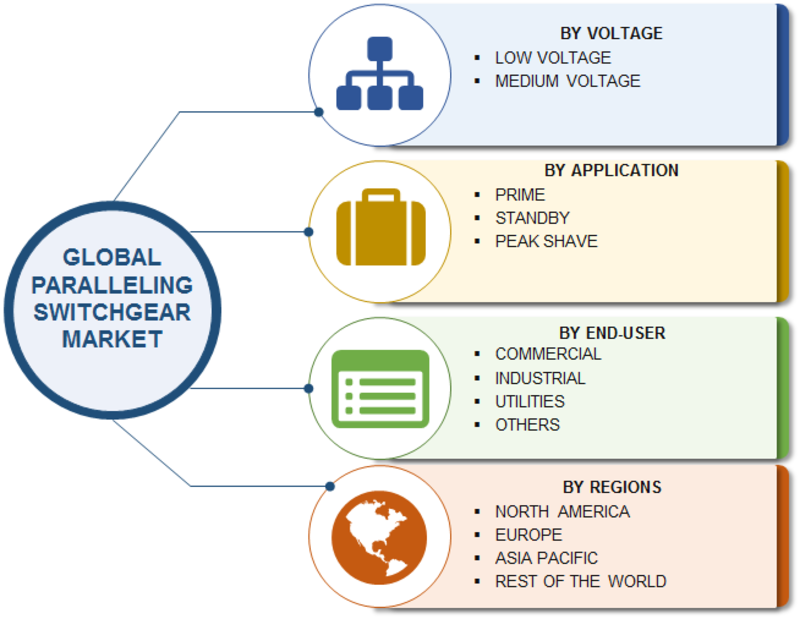 Global paralleling switchgear market has been segmented based on voltage, application, end user and region. Based on voltage, the market is segmented into low voltage, and medium voltage. Among these, the low voltage, is projected to dominate the paralleling switchgear market through 2023. The rising demand from the construction and telecommunications sectors is propelling the low voltage segment, particularly in countries such as China, India, Germany, and U.S. Low voltage paralleling switchgear is favored for industrial operations owing to safer operations and in housing capability of numerous assemblies of equipment at an identical place. An upsurge in demand from the industrial sector is anticipated to boost the evolution of the low voltage global paralleling switchgear market over the forecast period. Based on application, the market is segmented into prime, standby and peak shave. Standby segment had been dominating the market in 2016 and is projected to be the fastest-growing application segment. Standby generators are a way to maintain the stability of power in many industries such as healthcare, data centers, and process industry. Based on the end user, the market is segmented into commercial, industrial, utilities and others. Industrial had been dominating the market in 2016 and is projected to be the fastest-growing end user over the next five years. Industrial segment is propelled by factors such as the growing demand for critical power from industries in developing regions of Asia Pacific and Middle East & Africa. Focus on data center services directed by increasing demand from finance and e-commerce sectors and huge investments in public infrastructure schemes by governments worldwide are the significant drivers of the industrial segment of paralleling switchgear market.

The paralleling switchgear market is projected to have enormous developments over the forecast period owing to continuous technological advancement in energy sector tied with rising power demand. The market is also likely to have a huge number of expansion activities by global and well-established firms. Mergers and acquisition activities are anticipated to be seen during the forecast period with several contracts and agreements among the top EPC contractors and Government across the globe.

In the future, what CAGR is estimated for the paralleling switchgear market?

How is the performance of paralleling switchgear market companies going to affect the market revenues?

A flourishing income level in the market is anticipated to shape the market in the forthcoming period.

Who are the distinguished firms functioning in the paralleling switchgear market?

What is the regional forecast for the paralleling switchgear market?

The APAC region is expected to motivate the global market in the upcoming period steadily.

What are the factors prompting the growth in the paralleling switchgear market?

The intensifying share of distributed generation is anticipated to transform the market.

Paralleling Switchgear Market, predicted to expand at ~5.5% CAGR by the end of 2030