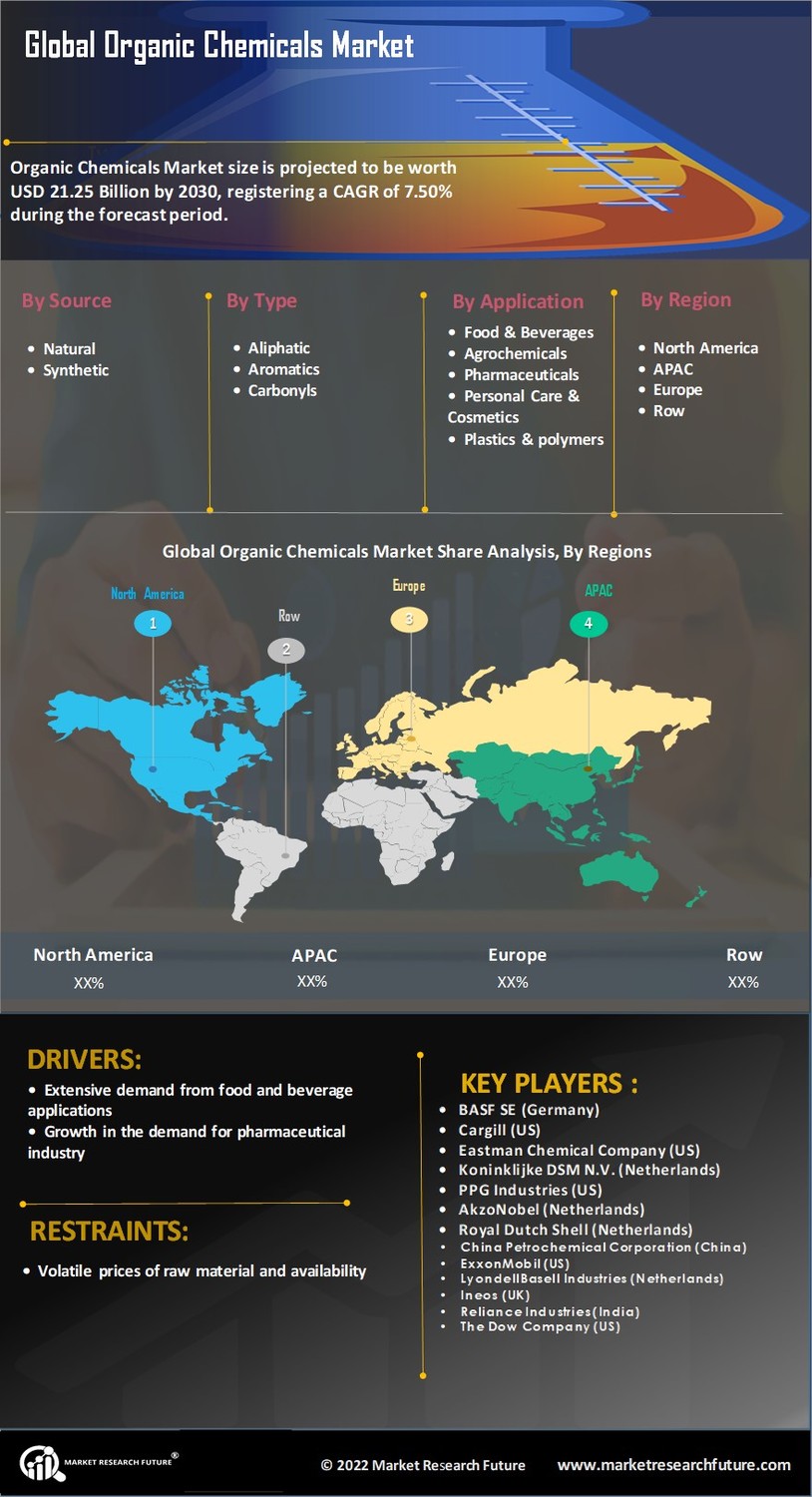 COVID-19 has had a negative impact on overall chemical production, particularly on the production of organic chemicals, owing to disruptions in the global supply chain. This is due to the global lockdown and travel restrictions imposed to limit the spread of the coronavirus. The pandemic has had an impact on global operations of various industries such as food and beverage, animal feed, and pharmaceuticals, limiting the production of organic chemicals. Because Organic Chemicals are widely used in a variety of industries, a decrease in their operations has a direct impact on the growth of the Organic Chemicals market.

Organic chemicals, on the other hand, are widely used in the food and beverage, agrochemical, and pharmaceutical industries. Because these sectors fall under essential services, demand has increased slightly. Organic chemicals like acetic acid, citric acid, lactic acid, formic acid, and fumaric acid are commonly used in the food and beverage, pharmaceutical, personal care, and cosmetic industries. As a result, demand for Organic Chemicals increased from a variety of end-use industries during the global pandemic. Organic Chemicals producers have kept their facilities running with a limited workforce in order to meet the increased demand from end-users.

Furthermore, procurement of raw materials was a major impediment, as the majority of raw material suppliers in the market were forced to close their operations due to the outbreak of COVID-19. The closure of several raw material producers and Organic Chemicals manufacturers has resulted in a drop in global consumption. Given the circumstances, many companies have halted production at their facilities all over the world. Some large companies that are still in operation are only operating at 40-60% efficiency. However, these businesses have resumed operations in accordance with government regulations. Furthermore, the imposition of various fiscal and monetary policies by governments and managements around the world to limit the damage caused by COVID -19 is expected to result in certain relief.


Organic Chemicals are widely used in food and beverage industry, because of their antioxidant and preservative properties. There is also a growing demand for foods produced with less harsh methods, such as heat, salt, sugar, and chemicals. Furthermore, newer technologies for preventing the growth of harmful bacteria are being introduced, increasing the demand for Organic Chemicals in food applications.


Manufacturers are increasingly investing in the technological advancement and production of bio-based organic chemicals in response to rising demand for green and environmentally friendly organic chemicals.


Several Organic Chemicals are toxic and hazardous to the environment. Acetic acid is commonly used in pesticide and herbicide formulation. High concentrations of acetic acid, on the other hand, can be harmful to animals, plants, and aquatic life. Furthermore, volatile organic compounds which was majorly used in paints & coatings industry has witnessed a major setback due it toxic nature.

Various food safety authorities consider the majority of organic chemicals, such as acetic acid, citric acid, lactic acid, and fumaric acid, to be safe food additives. According to the CODEX Alimentarius, citric acid, for example, may be used in a variety of listed food and beverage products under Good Manufacturing Practices (GMP) as outlined in the Preamble of the Codex GSFA.

Asia-Pacific held the largest market share and is expected to grow at the fastest rate in the market. This is primarily due to massive domestic production, large expansion plans in China, and the widespread presence of key producers in the region. Furthermore, increased awareness of the health benefits provided by organic chemicals, as well as lenient government regulations in the region, are expected to boost demand for organic chemicals in the region. Due to large production bases of Organic Chemicals producers, high demand for animal feed, and the presence of advanced manufacturing technologies, North America accounted for the second largest market share in the global market. Europe comes after North America. Due to stringent government regulation, Europe's growth in the global market has been stagnant. The Middle East and Africa, on the other hand, are expected to grow profitably due to a steady supply of raw materials. Because of the rise in urbanisation and the presence of major organic chemical producers in Brazil, the Latin America market is expected to provide significant growth opportunities.

The global Organic Chemicals market is highly fragmented, with numerous global, regional, and unorganized players present. The major players in the global market have large production bases and advanced manufacturing facilities both at home and abroad. This allows them to supply the product to various end users around the world in less time than small-scale manufacturers, giving them a competitive advantage in the global market. Furthermore, manufacturers are heavily involved in R&D activities to develop advanced production technologies and expand their production facilities to meet the growing needs of end-users worldwide. Furthermore, manufacturers are forming long-term alliances with key stakeholders in order to gain a significant market share in the global organic chemicals market.

BASF SE (BASF) is one of the largest chemical producers in the world. The company divided its business segments into six divisions, namely, materials, industrial solutions, chemicals, surface technologies, agricultural solutions, and nutrition & care. BASF provides Organic Chemicals including ethylene, propylene, butadiene and benzene, amongst others.

Some of the key developments include:

The Organic Chemicals market is segmented by source, type, application, and region in the report. In terms of insights, this report has focused on various levels of analysis such as market dynamics, value-chain analysis, porter's five forces, competitive landscape, and company profiles—all of which comprise and discuss views on the global organic chemicals' emerging and fast-growing segments, regions, and countries.

What growth rate global Organic Chemicals market would register in the future?

Global Organic Chemicals market would register a growth of 7.50%.

Which industry will play a crucial role in taking the Organic Chemicals market ahead?

Food and beverage industry will play prominent role in taking the market forward.

What is the key driving restraining factor for the global Organic Chemicals market?

Volatile prices of raw materials and environmental concerns could restrain the market.

Which region would enjoy the upper hand in the Organic Chemicals market?

Which Asia Pacific country would set the trend in the Organic Chemicals market?

Organic Chemicals Market is predicted to reach USD 21.25 billion at a CAGR of 7.50% during the fo...