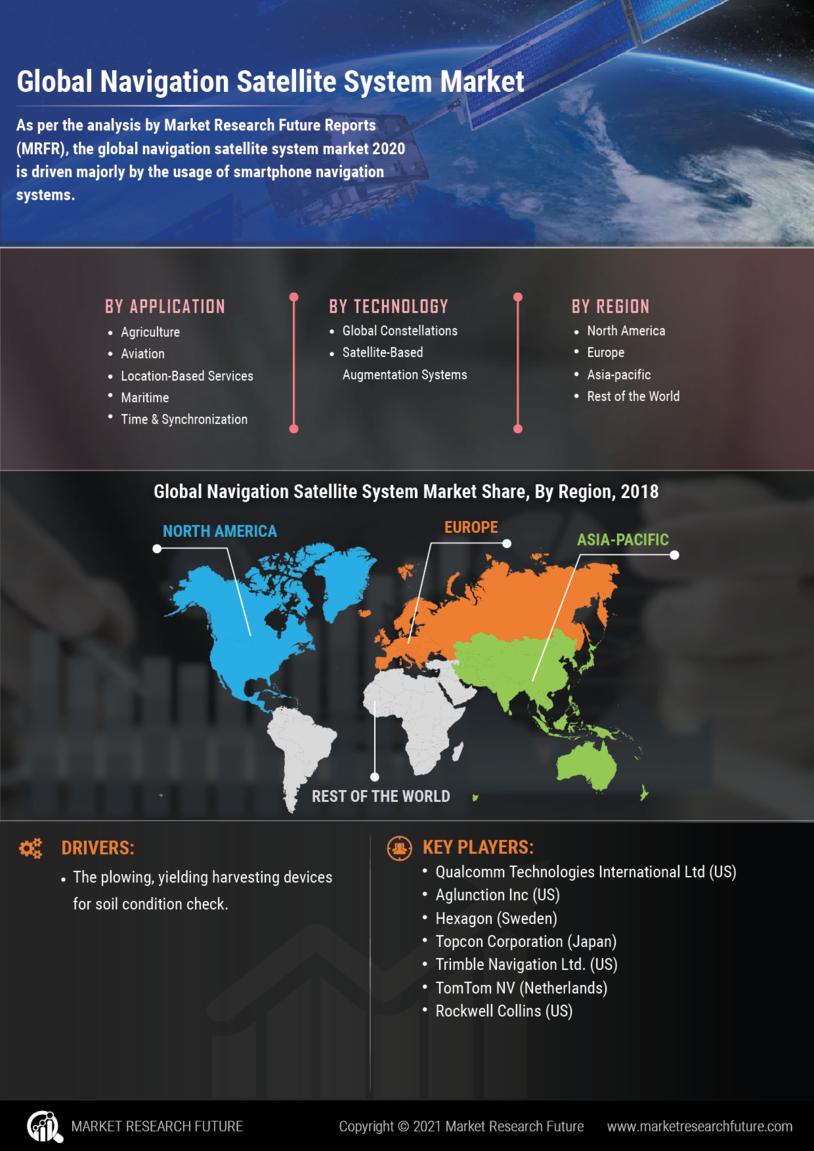 Global navigation satellite system (GNSS) is the virtue surrounding which helps the identification of the geographical location of any user. It works on the principle of positioning, navigation, and timing (PNT) of the users. Satellite position helps in identifying the position of the user and translate it into a human-friendly digital signal using the time variable which gives the electronic information to the system users.

GNSS is globally spread ranging from Europe’s Galileo to the US’s NAVSTAR Global Positioning System (GPS). Russia’s Global Orbiting Navigation Sputnikovaya Sistema (GLONASS) and China’s BeiDou Navigation Satellite System are also in race as per increased market demand. With the increase in competition companies need to maintain a disaster recovery system as well in case of system failures which are judged on Accuracy of transmitting and receiving the signal, Integrity i.e. alarming or notifying before the actual system failure or so-called threshold setting of the system, providing Continuity of functions and availability of all the other three.

The world can be presently called under the threat of COVID which has put all the fields at a standstill. Every business has faced an economic and political loss at some level. We have seen certain companies boost also at this point, but we have also seen a major loss of human life because of the global pandemic.

But the Global navigation satellite system has helped us during this alarming period. Each country came up with different ideas to track the people affected with the virus and thus isolating them from the rest until they are no more threat to friends and families surrounding them. GNSS has been a great advantage for containing the affected part to home and hospital spaces. Maintaining the data has helped globally to achieve a sense of relief to fight together with the startling human loss pandemic we are in.

Navigation Satellite System Trend has been the current boost in the world today as it yields good results in agricultural areas by giving precision in providing different technology and solution to improve the production, manure, and yield that benefits all. The plowing, yielding harvesting devices for soil condition check, virtual fencing, livestock tracking is well equipped with the navigation system to provide the optimal path with digital displays leading to less failure.

GNSS is doing wonders in the Aircraft industry by using the Emergency Locator Transmitters (ELT) which helps in the search and rescue during surveillance. Pilots carry handheld personal locators’ beacons (PLB) for better coverage. Navy through the world has conquered certain areas underwater which were not possible at one point with long-range electromagnetic signal wavelength transmitting receiving and decoding the threat.

Navigation Satellite System Market Trends in the area of Navy, army, agriculture is witnessing a growth in the market share and hence the navigation satellite system is aiming to provide services and thus, meeting the needs of the customer in the long run. All this is going to fetch results and reach the expected CAGR by the end of 2023.

Global Navigation Satellite System Market can be segmented as follows:

Navigation Satellite System is widely spread in all the fields as it is attached by technologies at hand. Be it agriculture, navy, army, aviation GNSS is everywhere. Traveling to places on daily basis using GPS is the classic example of GNSS. Clicking pictures and linking them to date time and place, portable computer, tracking health smartwatches are also in line.

The Navigation satellite system market is expected to grow at a very significant rate globally. During the forecasted period, it is estimated that the market of the North American, European as well as the Asian Pacific regions is going to undergo a boost. In comparison to the rest of the world, these markets are going to experience increased demand, investments as well as desirable opportunities for growth.

In the forecast period till 2023, the North American market consisting of the US, Mexico, as well as, Canada, will emergent as dominant forces in the market. In the current scenario too, the navigation satellite system market is undergoing rapid expansions.

The satellite navigation system market is a widespread market with many big names undergoing collaborations to meet the estimated growth in the forecast period. Some of the key competitors in the market are stated below:


Trimble Inc. is an emerging key player in the market by providing both products as well as solutions in context to the GNSS. the solutions are integrated GNSS systems, data radios, antennas, modular GNSS systems, and much more.


The scope of the report is valid in the areas where the navigation satellite system market is spread. Also, it is valid for businesses and enterprises lending their services to the navigation market and subsequently to the customers.

How is Navigation Satellite System classified based on technology?

Who is the world leader of the Navigation Satellite System Market?

North America is the most promising country preceded by Europe and Asia-Pacific.

Disaster recovery (multiple satellites) is planned for all Navigation Satellite Systems which gives a continual delivery in terms of failure and system error.