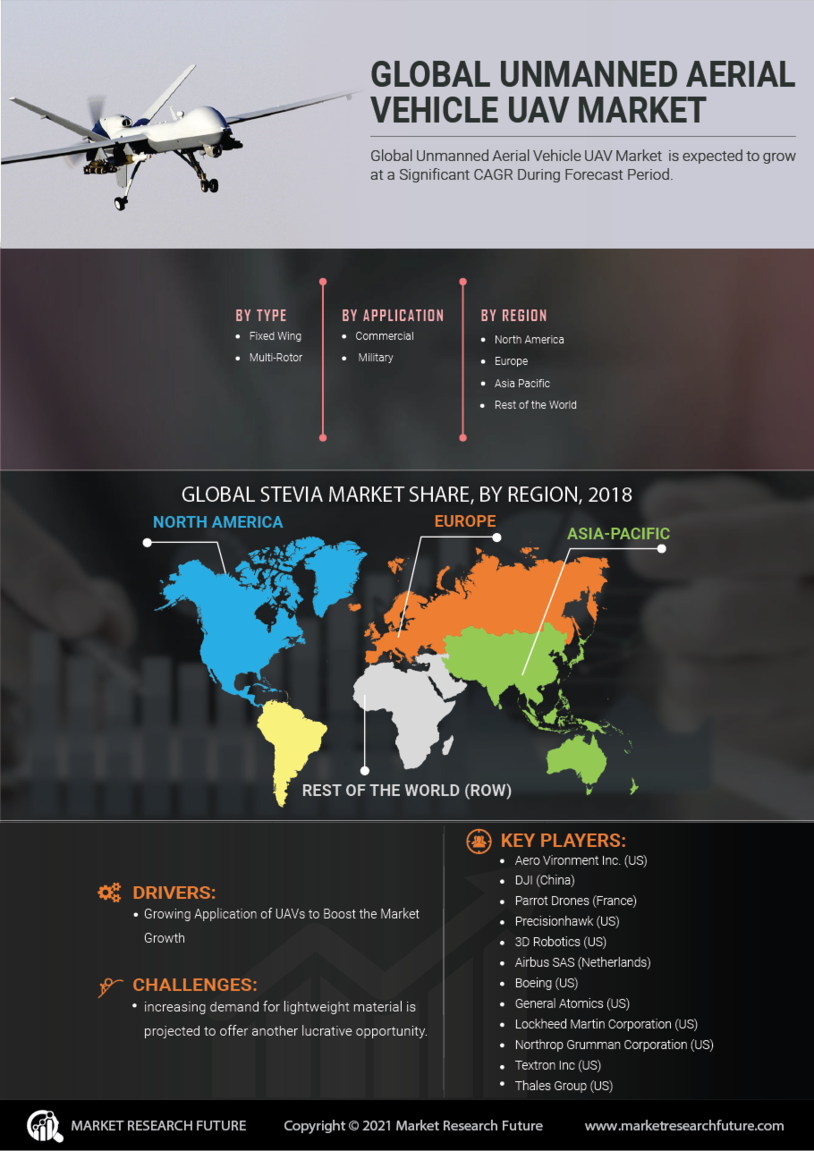 Unmanned aerial vehicles (UAVs) are critical components of the drone-like Unmanned Aerial System (UAS). The autonomous aircraft include onboard computers that can be operated remotely from ground-based operators. The global UAV market is predicted to increase significantly during the forecast period, owing to the growing use of drones in transportation & logistics, inspection, surveying, and agricultural spraying. Another major factor expected to support demand during the projection period is the device's prominence in the industrial field.

COVID-19 has arisen as a global pandemic that has led to nationwide lockdowns and economies slowing down. In this case, different areas of life, ranging from consumer goods to manufacturing operations, have been affected. UAV has arisen as a major utility commodity in these conditions, where human operations have been restricted and limited because of the disease outbreak. Various UAVs, from small to large, are used for a wide variety of uses, demonstrating that UAVs can be integrated by public and private agencies as a platform for planning and training for similar scenarios in the future. It is expected that the global UAV Indusrty will see growth in the adoption of UAVs during the pandemic era. In the war against COVID-19, the use of drones could be a game-changer. The device is used by various countries to easily distribute test kits and emergency supplies to COVID-19 hotspots, thereby increasing the scale of the Unmanned Aerial Vehicle UAV Industry.

Growing Application of UAVs to Boost the Market Growth

Due to the growing application of drones in transport and logistics, inspection, surveying and agricultural spraying, the global UAV market is expected to expand significantly during the forecast period. Another important reason for supporting the demand during the forecast era is supposed to be the the importance of the device in the industrial field. In addition, the rising boundary conflict between different nations is expected to have a positive effect on the market. The growing adoption of UAVs by various industries such as mining, oil & gas, telecommunications and retail among others is anticipated to affect the Unmanned Aerial Vehicle Market development. In addition, the growing drone trend is delivering is expected to bolster the Unmanned Aerial Vehicle Market during the forecast period.

Over the analysis timeframe, the increasing popularity of solar-powered drones is projected to present a huge incentive for business growth. Furthermore, increasing demand for lightweight material is projected to offer another lucrative opportunity that can increase the market.

Concerns Regarding Cybersecurity to Impede the Market Growth

To work, UAVs rely on their on-board autopilots. Therefore, an autopilot architecture that is not susceptible to cyberattacks must be created. This is a critical element in the appraisal period that can have a negative effect on the market. Different countries have implemented strict rules and regulations banning the use of Unmanned Aerial Vehicle  Market, which are predicted to pose a major challenge to business development during the evaluation period.

Over the analysis period, the commercial segment of Unmanned Aerial Vehicle Market is expected to show a greater CAGR than the other segments.

At the highest CAGR of 24.13 percent during the analysis tenure, the payload segment is projected to rise. Furthermore, the increasing focus of companies to the modification and development of the drone structure to allow them run in any severe environment conditions further encourages the growth of this Unmanned Aerial Vehicle industry.

In the evaluation period, the fixed-wing segment is projected to undergo a higher CAGR than the other segment. This is largely due to its higher manoeuvrability and lightweight size, nature's ease of use, higher payload power, and comparatively lower cost than other drone types. Furthermore, these drones need less space to take off and will float in the middle of the flight.

Due to the demand for these UAVs from the defence sector for surveillance and reconnaissance applications, the small UAV segment is projected to rise to the highest CAGR during the forecast period.

The global market is projected to be dominated by North America during the study period, as per the Unmanned Aerial Vehicle (UAV) Market report released by MRFR. On account of major applications in the military and defence sector, North America has the highest demand. Because of its usage of municipal welfare, regional domination is projected to last over the forecast era. Because of the involvement of eminent players, the US is expected to make the most valuable contribution to expanding the regional market. The US is the biggest provider of Market worldwide. Due to the robust deployment of the system in the defence business, the area is expected to lead. Therefore, the region is expected to garner the largest Unmanned Aerial Vehicle Market share in the assessment period.

Due to the increasing demand for commercial UAVs, APAC is expected to see robust growth during the review timeframe. Increasing aerial photography, increasing drone deliveries, and increasing border tensions between developing countries are expected to reinforce the regional market for unmanned aerial vehicles during the review period. However, during the forecast period, the Asia-Pacific region is expected to witness rapid growth. This region's rapid growth is primarily driven by the increasing adoption of automation and advanced technologies in countries such as China and Japan across a wide range of industries to counter rising labour costs, supporting government initiatives across the region, and growing investments by major UAV companies.

Due to the rising cases of crime and terrorism, Europe is expected to show significant market growth during the forecast period. Among all, the United Kingdom is projected to make the most important contribution in the evaluation period. Moreover, the increasing use of commercial UAVs in the coming period will significantly increase the Unmanned Aerial Vehicle (UAV) Market.

MEA to be a Lucrative Market for UAVs

Due to the increasing expenditure of governments on UAV development projects, MEA is expected to be a lucrative market during the forecast period. The region is experiencing harsh weather conditions, which is why the use of UAVs is becoming increasingly popular as they can be used for different purposes without any risk.

The key players in the global Unmanned Aerial Vehicle UAV Market are adopting different tactics that are likely to increase the market's competition. The growing worldwide demand for UAVs is likely to motivate key players to introduce innovation in their devices that in the evaluation period can improve market competition. Increasing mergers and acquisitions and partnerships are some of the strategies adopted in the review period that are likely to intensify Unmanned Aerial Vehicle (UAV) Market competition.

Mar 2022 Two Iranian drones were shot down by Israel's F-35i Adir fighters. Israel claims the UAVs were intercepted before they could enter Israeli airspace. This indicates that they were shot down over the airspace of at least one other country; however, Israel did not say which one. Before the UAVs entered Israeli airspace, they were intercepted in collaboration with neighboring countries. Ground control equipment identified and tracked the UAVs during their flight.

Unmanned Aerial Vehicle (UAV) Industry Size is estimated registering a CAGR of 10% during 2020-2030.

What are the different type of Application of UAV Industry ?

In Which Region Unmanned Aerial Vehicle (UAV) Market Is Dominated ?