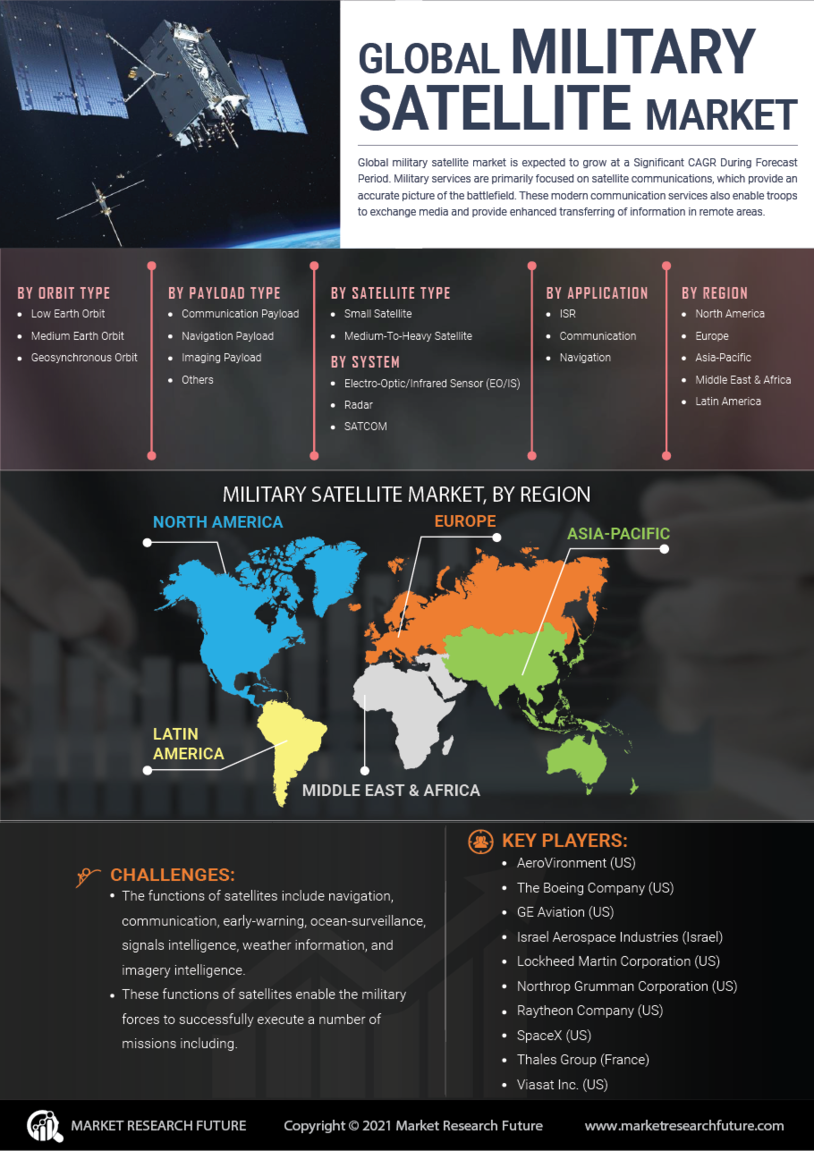 Satellites are an important technology in today's world. It's a man-made satellite that orbits the Earth for various reasons. They're a computer-controlled system that can adjust orbits, generate power, and regulate temperature. Other useful aspects of the satellite include navigation, intelligence, meteorological data, and maritime monitoring. The portable military satellite is the current satellite market trend. Military satellites are an essential communication method for providing precise battlefield information. It establishes a communication link between a source transmitter and a receiver located all over the world. The growing demand for IoT in the aviation industry for various applications is predicted to fuel market expansion in the global Satellite Communication market by the end of the research period. Interconnectivity in aviation applications for IoT-based devices and services is necessary for interconnectivity in IoT-based devices and services, which is crucial for optimising various operations in the aviation sector. This real-time data sharing between IoT devices and components needs satellite connectivity. As a result, satellite communication will play a key role in IoT services and the aviation industry, driving market growth throughout the forecast period.

Many global markets face several losses due to the covid 19. The satellite launch sector is also facing plenty of challenges. The funding from the consumer is affected due to the pandemic. Secondly, the closure of the research facilities has caused a massive impact on the market. The manufacturing of the military satellite came to a halt. However, the market is gradually resuming its production activities. Further, satellite market research is creating more growth opportunities for the market. During the pandemic, the demand supply chain was severely disturbed. However, the military satellite market trends remain stable during the forecast period. The most affected part of the military satellite market is the small business. The lack of cash liquidity was a major challenge in this market. However, the commercial activity is recovering that provides exceptional growth opportunities in upcoming years.


The technological advancements in the satellite market are offering exceptional growth opportunities. The military satellite is a highly fluctuating market. There are plenty of technological advancements in the product. The new developments in this field offer potential growth opportunities in the future. The key players of the market are establishing new product development strategies in the forecast years. Also, the enhanced version of the military satellite will come with new communication features and a surveillance system.


The military satellite market has a few retraining factors. The military satellites are a crucial communication system. However, the time taken to transmit the information to the ground defence system is long. The long time gap is the restraint of this market. It can result in several confusion and disruptions during an important mission. The reliance on this satellite is reduced when these problems arise. Also, if there is any technical difficulty it is impossible to fix it. Once the satellite is launched it becomes difficult to make any repairs. These factors can restrict the overall market forth in the future years.


The major challenge in the military satellite market is the high cost related to the tasks. The operational and deployment cost of this satellite is immense. Only developed nations are now taking advantage of this high-end technology. Cost is one of the significant challenges that are declining the growth rate of this market. Moreover, it is a technology that is not easily feasible in undeveloped regions. This factor affects the overall market expansion rate of the market. The high cost and difficult feasibility in the underdeveloped regions can diminish the market demand in the forecast period.


The military satellite market trends look positive. The growth opportunities and market drivers ultimately increase the overall demand. However, due to the cost and less feasibility, the market may face some severe challenges. The research and development programs carried on these markets will prove beneficial for the overall growth. With the research, the key players are introducing vertical applications of this satellite. Also, the worldwide investment in military satellite increases the global revenue and demand for this market. There is a serious requirement to take cost-cutting measures in this market. With all these aspects the overall growth analysis of the market looks promising.

The key players in the military satellite are establishing new developments. The crucial strategy is to implement cost cut down methods in the forecast period. The R&D by the key players is increasing the market demand in the upcoming years. Apart from this, market acquisition and partnerships are happening in 2025. The prominent regional players are responsible for huge revenue in these regions.

The key players of the military satellite market are

On February 20, 2022, SpaceX launched a US ISR satellite, the National Reconnaissance Office's NROL-87 payload, into orbit from Vandenberg Space Force Base in California using a Falcon 9 rocket.

In October 2021, France reported that it had successfully launched a cutting-edge satellite into orbit, intended to allow all of France's armed troops worldwide to communicate quickly and securely, according to the government. The satellite is built to withstand military attacks and terrestrial and space-based disturbances.

What is the overall military satellite market growth for 2027?

Who are the key players of the military satellite market?

The key players market are Viasat Inc. (US)., AeroVironment (US), Thales Group (France), The Boeing Company (US), SpaceX (US), Lockheed Martin Corporation (the US, GE Aviation (US), Raytheon Company (US) and Northrop Grumman Corporation (US).

In Which Region military satellite market Is Growing ?

The Asia Pacific will experience the fastest growth rate during the forecast year.