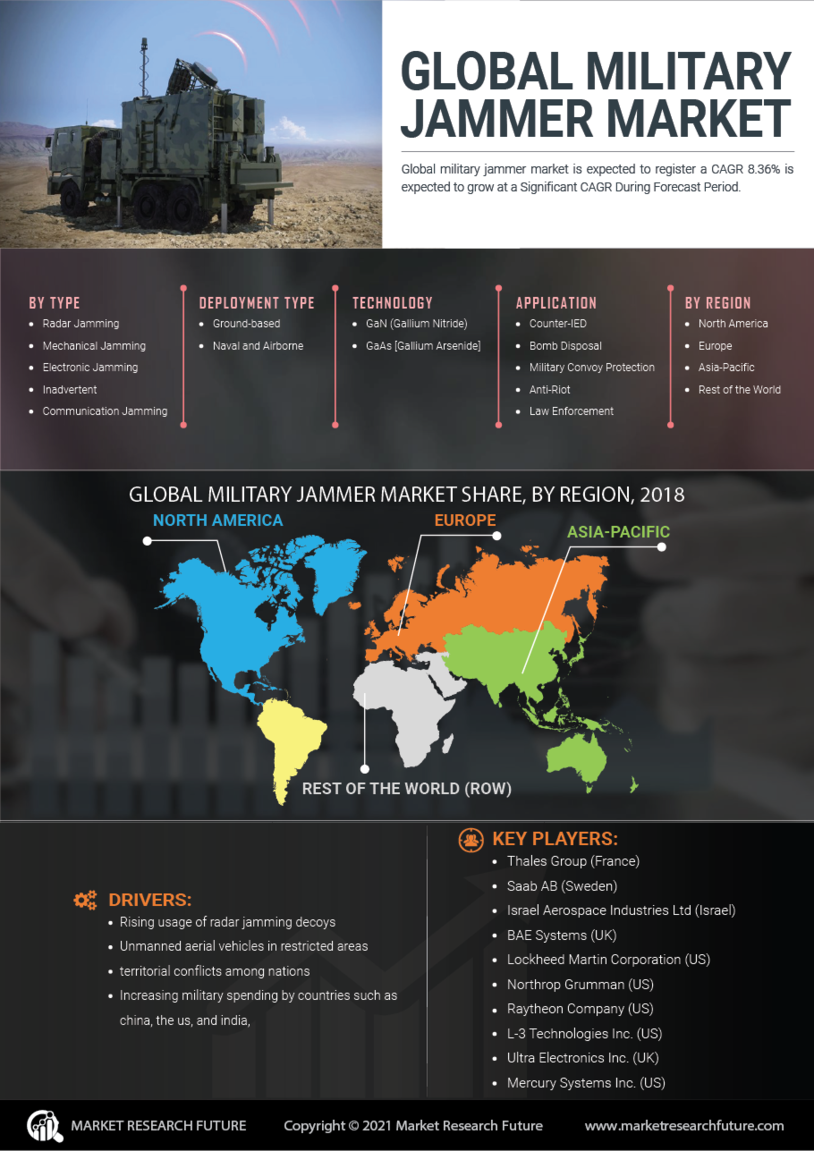 It is to be noted that the Military Jammer Market is predicted to witness rapid growth USD 9.8 billion, with the CAGR being 7.80% in the forecasted period for 2022-2030. Military jammers play a significant part in assuring smooth and efficient communication in the war fields. However, not all signal military jammers are the same, as there is a huge difference between regular and military jammers in many ways. Although both come in handy for communication purposes, these military jammers work at very high-frequency ranges than regular ones.

The military jammer system devices are used widely in unmanned aerial vehicles and radar jamming decoys to ensure the safety of the soldiers and military staff during rounds and duty hours. Many countries, especially the US, India, China, and Japan, are emerging military Jammer market players. There are many advantages of these jammers, especially in the field of defense and the military. These can come in great utility in war-like situations, where the signals and communications are all disrupted and unsteady. With the rising capital investments of many nations in these jammer markets, the industry is subjected to see definite growth in the forecasted years.

As per the military jammer market analysis, the military jammers market has also seen subsequent low growth due to the speed of the COVID-19 virus. With the rising cases, the governments of various nations focused more on the essential goods and healthcare services for eth survival of the population. The scarcity of experts to develop innovating military jammers was also witnessed, alongside low economic conditions that affected the manufacturers and suppliers of the Military Jammer Market. But the business analysts have stated that the conditions will go back to normal, with the control in the pandemic conditions.

Major Drivers of the market

Keeping in view the collected statistics, it is proposed that one of the major drivers that have contributed to the growth of the military radar jammer and related devices market large investments of capital from the governments part in many developed and developing countries. Also, the need to have an effective and proper defense system in the borders and military bases has some facilitating drivers in this market.

Opportunities of the global market

With the rise in the demand for advanced security systems and the increased need to have a strong military system to heighten the defense levels, the government of many nations is investing a fortune in military aided devices such as military jammer devices. It provides immense opportunities for people in the field of technology and research for many across the globe.

Although the Military Jammer Market is subjected to a visible growth in the coming years, some restraints can hold back the progress. One major market restrain of this advancing market is the availability of low-grade jammers due to the lack of good quality raw materials. Apart from this, some manufacturers indulge in the illegal production of jammers similar to the military ones.

As stated in the Market reports, the major challenge to lower this reputed market's market size and shares is the slow technological progression. With new requirements and needs based on military functioning and security coming up every day, the need for new and advanced technology to be induced in the military jammers has become a dire necessity.

While witnessing the most recent and updated reports, it is seen that the military jammer market size greatly affects the cumulative growth analysis as well. It will be profitable for the global military jamming devices revenue as well.

As per the market analysis, the countries included in the Asia-Pacific region have the highest demand for military jamming systems and devices. Countries like India and China are working towards a strong military system. It is followed by North America, which is predicted to have the highest growth rate in the coming years.

Following recent and valid reports, the global Military Jammer Market is segmented into categories that include division by application, deployment, product type, technology, and region. The segmentation shave is listed below to facilitate an in-depth understanding of the military radar jammer and other similar devices of the military jamming industry.

The Military Jammer Market is divided into bomb disposal, law enforcement, counter-IED, military convey protection, and anti-riot missions based on the application segmentation. The use of convoy protection jammer is witnessed aside from other military jammer types.

The Military Jammer Market is divided into Naval, Airborne, and Ground-based deployment centers based on deployment type. Surveys state that the ground-based segment has witnessed the highest market share of 35.25%, recorded in 2018. The use of military radio jammer is seen in all of these deployment centers.

Based on the product type, the Market is divided into communication jamming, electronic jamming, and radar jamming, inadvertent and mechanical jamming. Out of all these types, the radar jammer is accounted to have the highest market share of approximately 42, 36% in the year 2018. It is also predicted to have a market growth of 9.69% in the coming years of the forecasted period. There is a wide usage of military radar jammer along with the other product types as well.

The market is divided into GaAs (Gallium Arsenide) and GaN(Gallium Nitride) based on technology. Many military jammers, including the military drone jammer types, are also used in many military regions and other world purposes.

The Military Jammer Market is divided into many regions known to extensively use these jammers for various reasons based on region type segmentation. It includes several countries from the Asia-Pacific, Europe, North America, the Middle East, South Africa, and the rest of the world.

As per the information stated in the market revenue and market reports, this device is manufactured, supplied, and used extensively in many regions due to its high functioning capabilities. This regional analysis part of the report showcases that the countries belonging to the Asia-Pacific region have the highest demand in the respective military jamming market.

Apart from that, it is predicted that North America will see the fastest growth rate in the future forecasted years of the military radio jammer and similar devices market. Moreover, the countries like India, Japan, and China are becoming the vitally emerging regions with high growth rates in the consecutive forecasted of the respective market.

As per the recent military jammer market share reports, the data propose that with the ignorable and significant utility of these military jammers in various fields, many prominent manufactured and suppliers are leading the global market with large-sized revenues and shares.

Listed below are some key players of the global Market –

Following the military jammer market analysis, the recent developments are formulated based on the new technological advancements. In September 2020, L3Harris Technologies Inc. was known to get a contract costing approximately USD 104.0 million to supply and manufacture 'Integrated Defensive Electronic Countermeasures jammer systems to protect electronic dangers of the 'F/A-18 Hornet and Super Hornet Aircraft'.

Again on the January of 2021, BAE Systems signed a contract from the U.S. Navy, worth approximately USD 4.0 Million, to demonstrate the RFCM system for increasing the capability of protection of their new generation aircraft names, 'P-8A Poseidon. Apart from these recent developments, technology experts and scientists are working extensively to teach advanced technology and make the new generation proficient military jammer devices and more.

This military jammer market analysis is put together by making use of the primary and secondary research methodologies. It is important to note that all the information mentioned in this detailed analysis is valid and collected from the most updated and latest sources. This Market detailed analysis is brought to light to provide a better understanding and progression of the respective market.

This market analysis is also conducted to understand its status and performance in the global market. This report features aspects like a complete military jammer system market overview, the impact of Covid-19 on the market, the market dynamics that focus on the major market drivers, market restraints and challenges, cumulative growth, and so on. It also covers the parts related to regional analysis, main players, and the recent developments in the respective market.

The updated research and statistical reports are based on many aspects, including the military jammer market size and more. The below segmental table has been formulated to precisely understand the respective market.

What is the projected CAGR of the global Military jammer market?

The global military jammer market is touted to record a substantial market valuation at a CAGR of nearly 7.80%.

Which type segment is expected to record the highest growth in the global military jammer market?

The radar jamming segment is expected to witness the highest demand in the forecast period.

Which deployment is expected to witness the highest growth?

The naval segment is expected to observe substantial demand over the review period.

Which region of the global Military jammer market expected to witness the highest growth?

The APAC segment is slated to expand as the fastest-growing segment.

Who are the significant players operative in the global Military jammer market?