Military Jammer Market is estimated to witness a CAGR around 8% by 2023 :

Pune, India, May, 2018 /MRFR Press Release/- Market research future published a half cooked research report on global military jammer market. The military airborne radar market is estimated to witness a CAGR of around 8% during the period 2018 to 2023.

The Military Jammer market has advanced in radio technology from analog to digital, and nowadays, it is involved in the development of wideband radios, which is a new generation of jammer. In a military environment, jammers are frequently located in aircraft, helicopters, or unmanned aerial vehicles as the line-of-sight transmission which helps them to transfer military through communication transmitters located on the ground.

Electronic warfare equipment is progressing in its functionality due to the progression in algorithms and underlying software that impart operational capabilities to the electronic warfare systems. Researchers at the Georgia Tech Research Institute (GTRI) have developed an improved RF jamming technology, where the jammer uses Digital Radio Frequency Memory (DRFM) and has an open and simple construction. The project is termed as Angry Kitten, and it aims to develop an improved adaptability jammer. 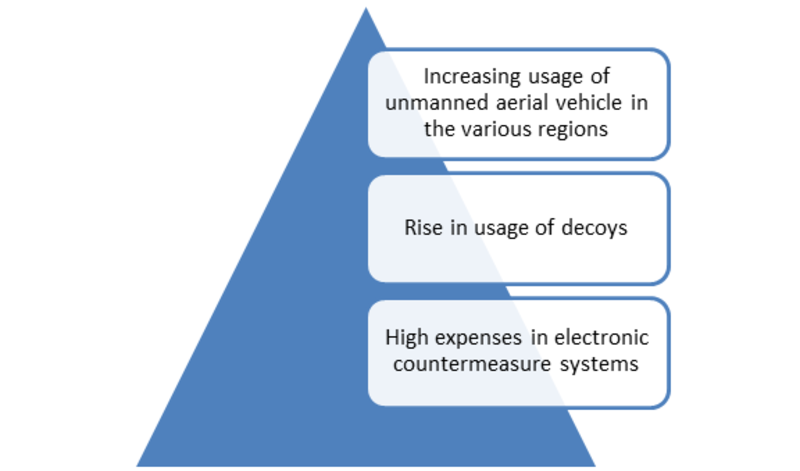 This study provides an overview of the global military jammer market, tracking three market segments across four geographic regions. The report studies key players, providing a five-year annual trend analysis that highlights market size, volume and share for North America, Europe, Asia Pacific (APAC), and Rest of the World (ROW). The report also provides a forecast, focusing on the market opportunities for the next five years for each region. The scope of the study segments the global military jammer market by its radar type, application, frequency band, and region.