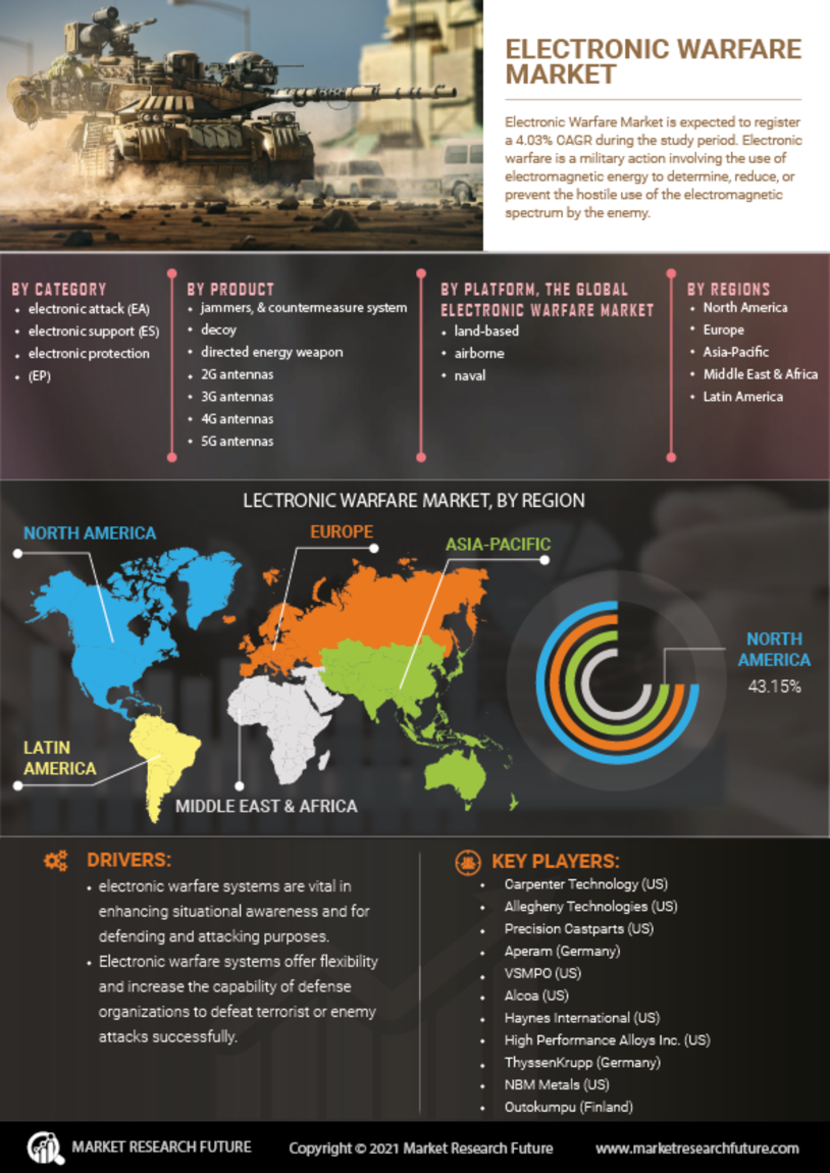 Electronic warfare is a military action involving the use of electromagnetic energy to determine, reduce, or prevent the hostile use of the electromagnetic spectrum by the enemy. It includes various products such as jammers, decoy, countermeasure systems, directed weapons, and antennas. The primary applications of electronic warfare include attack, defense, surveillance, and collision avoidance, mainly in the military sector.

Moreover, countries around the world are focusing on enhancing counter-terrorism measures to protect lives and ensure safety. Hence, electronic warfare systems are vital in enhancing situational awareness and for defending and attacking purposes. Electronic warfare systems offer flexibility and increase the capability of defense organizations to defeat terrorist or enemy attacks successfully. Thus, the demand for EW systems and solutions has been increasing over the last few years.

Global Electronic Warfare Market has been segmented based on Category, Product, Platform, and Region.

By Platform, the global electronic warfare market is divided into land-based, airborne, and naval.

Based on Region, the electronic warfare market is divided into North America, Europe, Asia-Pacific, the Middle East & Africa, and Latin America. 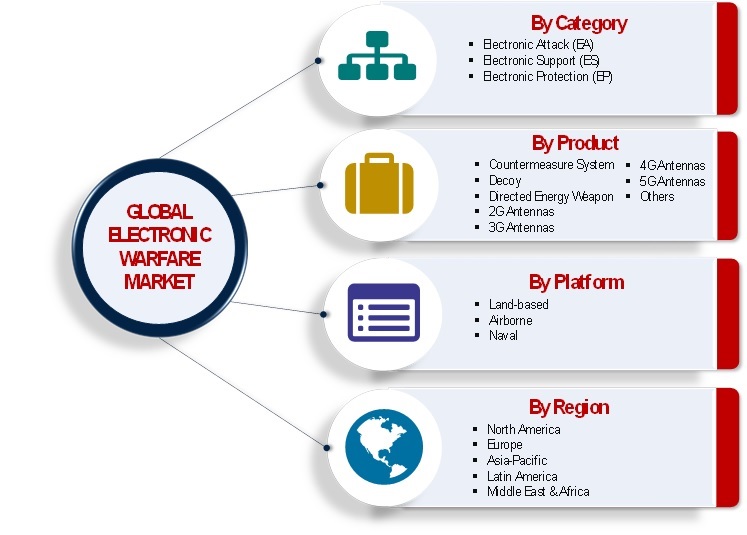 The Electronic Attack Segment is Expected to Grow at the Highest CAGR During the Forecast Period: MRFR

Electronic attack (EA) is the key component of electronic warfare. It includes a set of methods and technologies, which use electromagnetic energy or anti-radiation weapons to attack facilities, personnel, or equipment. Generally, EA is used to impact an adversary’s use of the electromagnetic spectrum (EMS). In the case of EMS energy, this action is generally referred to as "jamming" and can be performed on communication or radar systems. In the case of anti-radiation weapons, this often includes missiles or bombs, which can home in on a specific signal (radio or radar) and follow the path directly, thus destroying the system broadcasting. For instance, an anti-radiation missile such as AARGM will follow an enemy’s radar signal back to the transmitter, destroying the enemy’s ability to use radar for anti-aircraft operations. Rapid technological advancements in electronic attack systems are driving the growth of this segment. Furthermore, key players are focused on winning contracts with major countries to expand their business. For instance, in October 2020, Northrop Grumman announced the company had secured a USD 1.16 billion contract to provide EA capability improvements for the AN/SLQ-32(V) electronic warfare system for installation aboard the US Navy for aircraft carriers and amphibious assault ships. Thus, increasing collaborative deals are driving the growth of the EA segment. It is expected to exhibit a 4.40% CAGR during the forecast period.

Electronic Warfare Market has been segmented, by region, into North America, Europe, Asia-Pacific, the Middle East & Africa, and Latin America.

What is the trajectory for the electronic warfare market CAGR growth in the forecast period?

Who are companies supporting the electronic warfare market progress?

What valuation is projected for the electronic warfare market by the conclusion of the forecast period?

What reason will broaden the development of the electronic warfare market?

The materialization of cognitive electronic warfare technology is likely to aid in market expansion.

Which region is the leader for change in the global electronic warfare market?

The high investment level from the North American region is estimated to put it at the top position in the upcoming period.

Electronic Warfare Market Is Expected To Showcase Rampant Growth Over 2027