The constant developments related to technologies across all industries have the potential to achieve greater efficiency. Industries are on the lookout for investment opportunities in assets and machinery for the expansion of such desired efficiency. Energy efficiency is a significant concern for each industry. According to IEA, the international shipping industry accounted for 2% of the global energy-related CO2 emission in 2019. There is a constant need of ambitious and tangible strategies to accomplish the International Maritime Organization's aim of carbon neutrality in the second half of the century. The agenda is to introduce reduce carbon intensity in the short term, for example, through energy-efficient measures and slow steaming.

The Energy Efficiency Design Index (EEDI) and the Ship Energy Efficiency Management Plan (SEEMP) are the two rules to encourage increased shipping efficiency. The IMO enforces both of them, where the EEDI focuses on energy efficiency criteria for new ships and the SEEMP on ship operational efficiency. From 2015 to 2025, the EEDI demands an annual efficiency increase of roughly 1.5% for the new global fleet. With all these regulations and growing concern over CO2 emissions, energy-efficient systems are gaining more momentum. The use of VFDs can reduce systems' energy consumption by as much as 60%.

The rise in the demand for energy efficiency and growth in the shipbuilding industry, which will increase the installation of VFD’s in marine sector. Moreover, key market players, such as ABB (Switzerland) and General Electric (US), are signing contracts and agreements to provide marine propulsion solutions for ships, across the globe. These solutions include VFD along with propulsion motors and distribution transformers. New government regulations in the marine sector are increasing the need for more energy efficient operations with reduced carbon footprint, thereby, accelerating the adoption of VFD. Furthermore, the increase in seaborne trade has led to an increase in the demand for ships used to transport manufactured goods worldwide. For instance, according to the United Nations Conference on Trade and Development (UNCTAD), in 2017, international seaborne trade increased by 4% due to the growth in world economy. Furthermore, in 2016, as per UNCTAD, the import demand in China and South Korea have resulted 260 million tons of cargo, which has supported the growth of seaborne trade in the region. Similarly, according to the Government of India, India and Vietnam would increase their two-way trade to USD 15 billion by 2020 from USD 14 billion. These initiatives would drive the marine VFD industry in Asia-Pacific. However, cost intensive nature of marine VFD can pose a restraint to the marine VFD market.

Global marine VFD market has been segmented based on type, voltage, and application. On the basis of type, the global market is divided into AC drive and DC drive. The AC drive segment is expected to hold the largest share during the forecast period due to the various advantages of AC drive such as energy savings, increased life of rotating components, and reduction of noise and vibration level. On the basis of voltage, the global marine VFD market has been divided into low voltage and medium voltage. The medium voltage segment is expected to dominate the global market during the forecast period. On the basis of application, the global market is further segmented into pump, fan, compressor, propulsion/thruster, and crane & hoist. The pump segment is expected to hold the maximum share of the market during the forecast period. 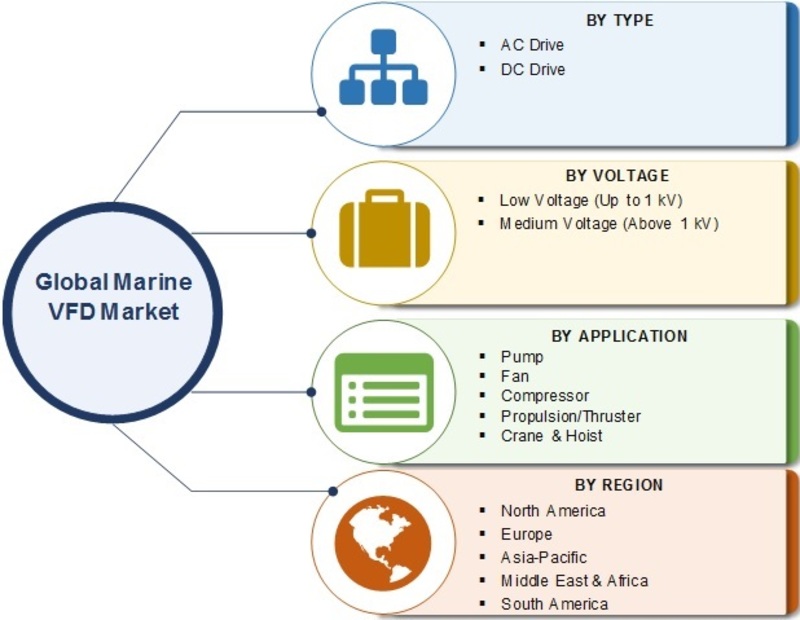 On the basis of region, the global marine VFD market is branched as Asia-Pacific, North America, Europe, the Middle East & Africa, and South America. Asia-Pacific is expected to hold the largest market share during the forecast period, owing to the presence of a large number of shipbuilding companies in China, Japan, and South Korea. China is expected to account for the largest share of the regional market and is taking measures to reduce carbon emission and save energy by installing fuel efficient marine electric propulsion systems in its ships. China is also considered an export-oriented economy and the global market has witnessed significant growth in the demand for electricity, mainly driven by industrialization and infrastructure development. These factors are expected to drive the demand for marine VFD in Asia-Pacific.

The intended audience of global marine VFD market are:

At what CAGR can the marine VFD market surge?

What is the estimated valuation for the marine VFD market?

Who are key players of the marine VFD market?

What are the marine VFD market drivers?

The rapid expansion of the shipbuilding industry can expedite the marine VFD market growth.

What is the regional analysis of the marine VFD market?

The presence of numerous shipping companies in APAC can bolster the regional market expansion.