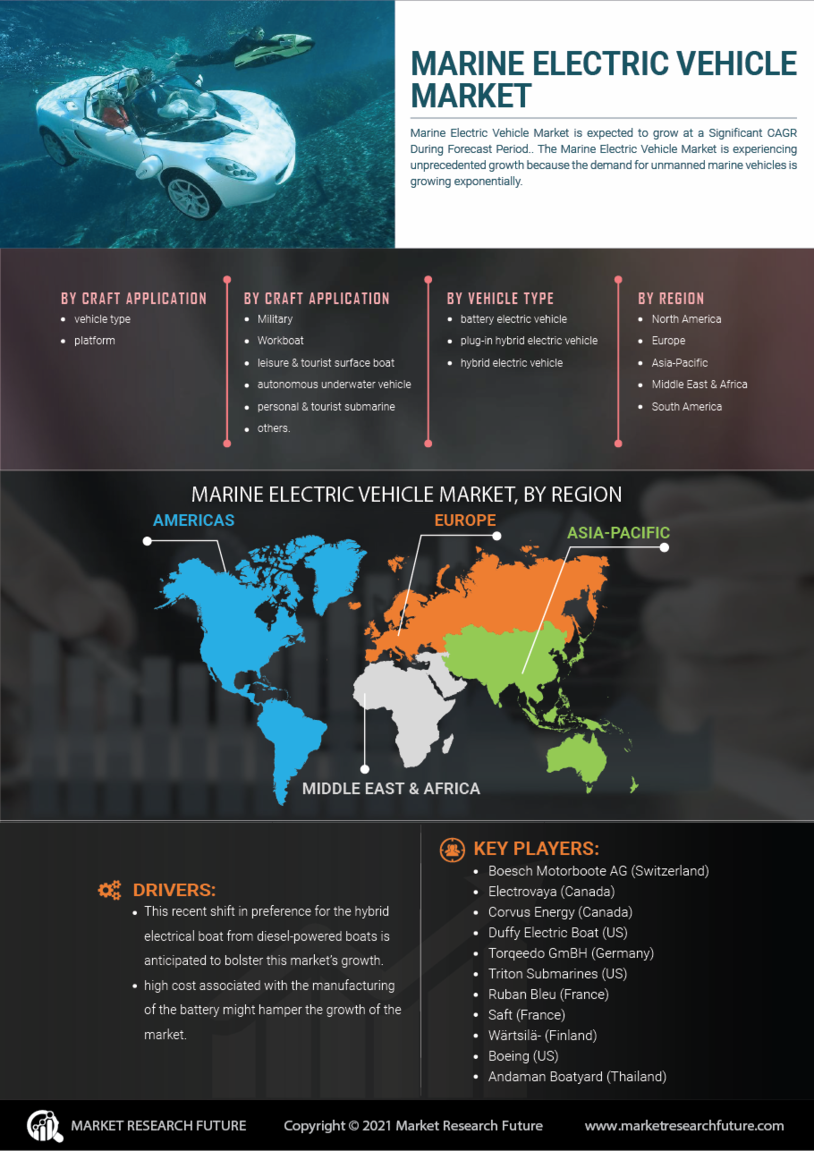 These vehicles have many uses in seafaring and marine operations. They are also useful in charting and mapping the ocean floor, extracting precious resources near beaches - a good example of this is a hydrocarbon, and doing valuable and vital scientific research. They are helping oil companies find new and useful sources of oil underground. Their excellent underwater cameras make this possible.

COVID-19 became a global pandemic last year. Governments were alarmed at the speed at which the virus spread. Most people recover from the virus with no long-term effects. However, some people had to be hospitalized because of the virus.

Governments around the world sought to contain this virus with temporary lockdowns and quarantines. These had limited effect in terms of containing the virus. They did, however, negatively impact many markets and industries. The Marine Electric Vehicle Market was one of these. Many manufacturers of these vehicles found the raw materials needed to make them hard to find. This raised the cost of producing them. They were forced to sell these vehicles at a higher price on the market.

Major oil and gas companies are constantly looking at new areas to mine more crude oil and natural gas in. since their traditional sources are starting to ‘dry up’ they are looking to the sea for resources. The sea is largely unexplored and has many resources to offer companies in many industries. This is a major driver of growth in the Marine Electric Vehicle Market.

The United States Navy is also buying and using these underwater robotic vehicles more often for various naval exercises. This is also expected to drive growth in the next few years.

Manufacturers of these vehicles see real money-making opportunities in terms of the types of companies that are willing to buy their products. They are investing heavily in research and development. The objective is to create a new generation of underwater robotic vehicles that have far more uses than the present generation does. These vehicles (the new generation) are also expected to be cost-efficient and have a greater ROI.

There is one factor that may hold back growth in the market. This is the fact that manufacturing these underwater robotic vehicles is very expensive. This forces manufacturers to pass on the extra costs to those who buy them in the form of higher prices. It discourages many would-be customers from purchasing.

Perhaps the greatest challenge that those companies in unmanned marine vehicles face lies in making a new generation of vehicles that have far more diverse applications and are environmentally friendly while keeping the prices for these vehicles in the affordable range for most customers.

Triton Submarines is a leading American company in the Marine Electric Vehicle Market. It has managed to retain a superior position and build a sustainable competitive advantage by investing heavily in research and development. Thus, it has been able to manufacture a new generation of unmanned marine vehicles that are affordable, more effective, and efficient in what they do, and have far more uses than the previous generations did.

The Marine Electric Vehicle Market can be separated into the following sub-segments based on vehicle type:


The battery-electric sub-segment held the largest market share three years ago. This sub-segment will have the highest CAGR until 2025. This is due to the fact that battery-electric powered underwater vehicles are cost-effective. They are also affordable, easy on the environment, and easy to maintain. The cost of maintaining these vehicles isn’t very high either.

The Marine Electric Vehicle Market can be separated into the following sub-segments based on platform:

The Marine Electric Vehicle Market can be separated into the following sub-segments based on craft application:

The military sub-segment had the highest market share in 2018. That said, the independent underwater submarine sub-segment is expected to register the highest CAGR until 2025. The reason for this is that many sectors and industries like the American military and defense, the oil and gas, and the environmental protection industries are driving up demand for these vehicles at an exponential rate.

The Marine Electric Vehicle Market can be separated into the following regions:

The Asia-Pacific and Latin American regions are also expected to see healthy CAGR. Indeed, their market shares will be increasing substantially for the time period being studied. What is accounting for this is the fact that most countries in the Asia-Pacific and Latin American regions are urbanizing rapidly. The militaries and other industries in these regions are getting richer. They want to buy more effective and powerful underwater vehicles that are robotic for a variety of purposes including naval and research-based.

Many countries in Latin America and the Asia-Pacific region are seeing the explosion of a middle class. This is especially true in India, Mexico, Brazil, and China. As these people become wealthier, their demand for seafood increases. These middle classes are willing to pay a premium for specialty seafood like crab and lobster. Underwater robotic vehicles are needed to find these reserves of sea animals. This is a huge factor that has been driving the high CAGRs in the Latin American and Asia-Pacific regions.

Also, the economies of India and China are growing rapidly. This is creating immense growth in the shipbuilding industry. Japan is also witnessing a huge rise in the demand for shipbuilding infrastructure. All of this accounts for a higher CAGR in the Asia-Pacific region as well.

The Marine Electric Vehicle Market remains highly competitive. The reason is that the market has a high CAGR and is seen by many big manufacturing companies as being lucrative. This is the reason why new companies are entering the industry despite high barriers to entry.

All companies in the Marine Electric Vehicle Market are finding that they have to resort to doing one or more of three things to survive:


Companies invest in their futures when they invest heavily in research and development. This is especially true in the Marine Electric Vehicle Market. Companies are finding that intensive investments in research and development allow them to come up with the new generation of more powerful and efficient vehicles with far more diverse applications. It also allows them to justify charging much more for these vehicles.

Companies that merge with/acquire other companies expand their resource base. They have more resources with which they can do quality research and development. They can also do extensive marketing. It’s marketing that will bring in more customers in the short and long term. This also translates into more revenue for them - all companies need a strong revenue base in order to survive.

Boeing is a major player in the Marine Electric Vehicle Market. It has managed to remain competitive by investing heavily in research and development.

The CAGR for the Marine Electric Vehicle Market is 10.21%. This is expected to remain constant until 2025. The North American region dominates in terms of market share and CAGR.

What is the CAGR of the marine electric vehicle market?

What can drive the marine electric vehicle market?

Increase in demand of aviation services to support the marine electric vehicle market.

In which region is marine electric vehicle market expected to thrive?