The worldwide Lingerie Market is anticipated to acquire a market size of around USD 123.33 billion during the review period. However, the global market for Lingerie is projected to account for the market value at a CAGR of 4.52% during the forecast period of the year 2028. Lingerie is a type of clothing worn closest to the inner parts of the body. The main function of Lingerie is to provide comfort and maintain hygiene.

The global market for Lingerie is driving during the forecast period due to the rising working women population worldwide. However, the prevalence of the unorganised sector is projected to affect the global market growth. Regionally, the global Lingerie Market has been spread across different areas like Europe, North America, Asia-Pacific, Latin America, and the rest of the world. The Asia Pacific regional market for Lingerie is estimated to generate the largest market share during the forecast timeframe.

According to the global Lingerie Market report, the current market has been segmented based on product type, distribution channel, and price range. Further, the distribution channel segment has been classified into non-store-based and store-based. Regarding the price range segment, the worldwide market for Lingerie has been divided into premium and economy. Based on product type segment, the global market for Lingerie has been segmented into knickers & panties, bras, loungewear, and shapewear.

The rapid proliferation of the COVID-19 pandemic has resulted in a global crisis. Impacting over 195 countries, the pandemic has already created an economic downfall worldwide. The global pandemic is deemed to create a chaotic environment, resulting in a global recession. With the rapidly increasing number of cases, the global lingerie market is getting affected in many ways.

There was a spike in essential goods such as sanitizers and masks, and customers stocked up household essentials like toilet paper and bread with the outbreak. As a measure to limit the spread of coronavirus, various governments across the world restricted the gathering of more than ten people in a closed space, and many manufacturers were ordered to shut their production facilities. The government of various countries implemented physical distancing and limitations on transportation to fight surge ability. The procurement of raw materials became a cause of concern for the manufacturers owing to these urgent measures taken across the globe to control the spread of COVID-19. To fight the pandemic, the whole world was under lockdown has certainly affected the production of lingerie. Following state and regional guidelines, manufacturers have implemented extensive measures to protect the health and safety of their employees. Many global manufacturers temporarily closed their operations or limited the production capacity of their products. This scenario has also affected the manufacturers financially, and they are strategizing their operations to survive the pandemic with minimal losses.


Educational awareness among women and economic development underlines the high participation of women in the corporate sectors, especially in the emerging economies. Governments are also supporting the women workforce and taking initiatives to improve female economic empowerment and minimize the gap in labor force participation between males and females. The growing working women population has led to an increased per capita disposable income of the consumers, which has changed consumer spending behavior. Moreover, consumers are increasingly opting for comfortable and functional lingerie due to the rising awareness about hygiene, appearance, and the standard of living. Owing to the rising population of working women, lingerie sales have been increasing at a high pace across the globe. With the increasing spending power among women, the sale of luxury lingerie is also increasing.

Improvements in the current lifestyles of women are also anticipated to drive the sales of lingerie in the near future. For instance, the increasing health consciousness among women and their inclination towards physical workout activities has increased sports bras and workout underwear sales. The increasing exposure to social gatherings among working women is also contributing to the increasing demand for various product ranges such as shapewear, bralettes, seamless panties, and pushup bras in the lingerie industry. Thus, the increasing working women population significantly impacts lingerie sales and primarily drivesthe market growth.


The lingerie market is highly fragmented, with a huge number of players across the globe. There is stiff competition among the players in terms of designs, quality, prices, and supply chain. However, the major factor affecting their growth is the prevalence of the unorganized sector. It has been observed that the sales of the key players are majorly hampered by the local vendors, owing to their easy availability, lower price, and ease of customization. A major share of the population, especially in emerging economies, is price sensitive, making it difficult for organized brands to establish dominance over the unorganized sector.


Social media provides a potential opportunity for product launches and branding to bridge the gap between marketers and consumers. The explosion of social media has transformed the business environment, creating new opportunities for market players. There are continuous blogs on social networking sites such as Facebook, Instagram, Twitter, and YouTube that boost lingerie sales. Manufacturers use social media to promote their brand and build relationships with customers by offering exclusive advice and offers. There is a continuous rise in social media content dedicated to clothing style and intimate wear. Social media plays a critical role in driving the demand for lingerie, especially among youth, who are actively participating in social media for information nowadays. Thus, blogs posted on social media platforms in favor of lingerie highly influence the market's growth. Additionally, the social platform has also made room for small, indie brands to succeed and build their tight-knit communities on the platform, threatening long-standing giants like Victoria's Secret. Thus, social media is playing a vital role in the growth of the global lingerie market. It is considered an effective interactive strategy as it enables consumers to build a relationship with the brand. Marketing through social media also helps manufacturers keep abreast of the latest trends, exploiting mobility and new technologies to attract targeted leads.

Based on producttype, the global lingerie market has beendivided into bras, knickers &panties, shapewear, loungewear, and others. The bras segment accounted for the largest market share in 2020, while shapewear is expected to register the highest CAGR of 4.73% during the forecast period.

By price range, the global market has been segmented economy and premium. The premiumsegment is projected to exhibit a higher CAGR of 4.88% during the forecast period. 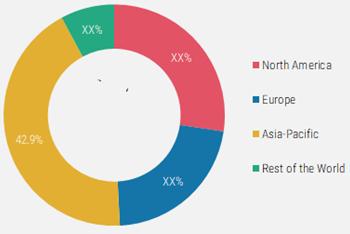 By region, the global lingerie market has been divided into North America, Europe, Asia-Pacific, and the Rest of the World. Asia-Pacific accounted for the largest market share of 42.95% in 2020. North America was the second-largest market in 2020 and is projected to exhibit a CAGR of 4.54% during the review period.The market in the Rest of the World is expected to register the highest CAGR of 4.86% during the forecast period.

Asia-Pacific is one of the most lucrative regions among the manufacturers of lingerie. It accounted for a 42.95% market proportion in the global lingerie market. The market in the region is projected to expand a CAGR of 4.39% during the forecast period. The growth of the market is attributed to several factors, like the increasing population in emerging economies of Asia-Pacific. Rapid urbanization in the emerging economies in Asia-Pacific and the rising per capita disposable incomes act as a significant factor for the growth of the lingerie market. According to the World Bank, China's per capita GDP was USD 10,262 in 2018, which has been increased by 2.86% from 2017.

Moreover, the increasing working women population in the developing nations of Asia-Pacific is further anticipated to propel the market growth during the forecast period. According to The Ministry of Internal Affairs of Japan, the percentage of the female workforce in Japan increased to 44.50% in 2019. On the other hand, the growth of the organized retail sector in several countries of Asia-Pacific is also anticipated to propel the growth of the lingerie market during the forecast period.

North America accounted for 27.36% of the global market in 2020 and is projected to expand at a 4.54% CAGR during the forecast period. The growth of the North American market is anticipated to be driven by several factors. The increasing working women population in the US is anticipated to act as one of the significant factors for the rising growth of the lingerie market. Moreover, the expanding lingerie product portfolio of key manufacturers is one of the most significant factors driving the market in this region. Innovation in the designs, colors, and materials in lingerie isone of the main factors expected to positively impact the growth of the lingerie market in the US. The presence of key manufacturers in the US offers a wide variety of products to consumers, further propelling the market demand. Also, online retailing is gaining massive acceptance among the consumers of the US. Consumers opt for online channels instead of store-based channels due to the discounted price rate and ease of distribution. According to the US Department of Commerce, the e-commerce industry reached USD 196.66 Billion in quarter one of 2021, which is more than 39% from the same quarter of 2020. According to MRFR analysis, the sales for lingerie in North America werevalued at USD 23,742.4 million in 2020. The US was the largest country-level market with a share of 53.76% and is projected to record a CAGR of 4.41% during the forecast period. However, the market in Canada is expected to register the highest CAGR of 4.72% during the forecast period.

The market comprises tier-1, tier-2, and local players. The tier-1 and tier-2 players have reach across the globe with diverse product portfolios. Companies such as Yandy LLC, Marks, Spencer plc, Victoria's Secret, Group Chantelle, and MAS Holdings dominate the global market due to brand reputation, product differentiation, financial stability, strategic developments, and diversified regional presence. The players are focused on investing in research and development. Furthermore, they adopt strategic growth initiatives, such as expansion, product launches, joint ventures, and partnerships, to strengthen their market position and capture a large customer base.

In August 2021, the prominent player Parade announced the latest collection launch ahead of summer's arrival. It is a floral display of outdoor enjoyment with sustainable underwear that is best suitable for the summer at a high temperature. Moreover, the company has introduced Summer Daisy Retail Market in New York City for its first in-person activation. This has aimed to offer shoppers an opportunity to explore potted plants and lingerie merchandise.

At what CAGR is Lingerie Market projected to grow during the forecast period?

Which region is expected to dominate the Lingerie Market?

Europe is expected to dominate the Lingerie Market.

What will be the value of the Lingerie Market during the forecast period?

Which factors are driving the Market growth?

Which factors may limit the Market growth?

The global lingerie market is projected to record a CAGR of 4.52% during the forecast period due ...