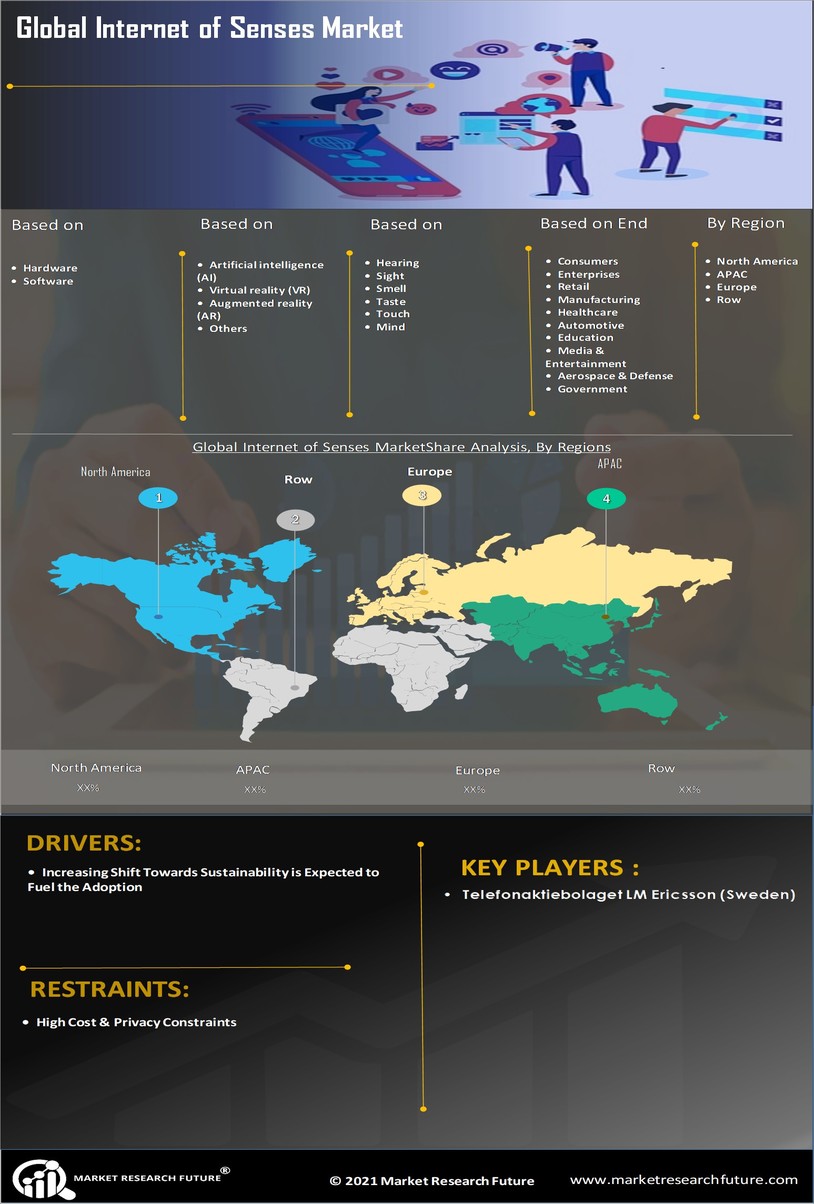 Digital technology today mainly uses two senses like sound and sight. But it may not be long before a human can taste, feel and smell digital objects in a way that is indistinguishable from physical experiences. With the fast-paced technological advances in AR (Augmented Reality) & VR (Virtual Reality) applications and the hyper-connectivity of 5G, digital experiences will likely move from screen-based to sense-based in the next forthcoming years. This connectivity era is already defined by Ericsson’s Research team named as the Internet of Senses, in which people will be able to virtually feel the world without using gadgets, smartphones included. It comprises six applications such as smell, taste sight, mind, touch, and sound.

In the internet of senses, audio, visual, haptic, and other technologies enable humans to have digital sensory experiences similar to the ones experienced in the physical world. The internet of senses augments human senses beyond the boundaries of bodies, giving augmented hearing, touch, vision, and smell. It allows an individual to blend multisensory digital experiences with local surroundings and interact with remote devices, people, and robots as if they were right beside him/her. Moreover, the internet of senses will rely on technologies including artificial intelligence (AI), augmented reality (AR), virtual reality (VR), and automation to interact with human senses of sound, sight, taste, smell, and touch.

Furthermore, consumers will be the major user of this technology in the future as digitally sense will gain significant demand because of this technology’s countless possible use cases. For example, consumers could digitally visit forests or the countryside, including experiencing all the natural smells, feel of those places. A person could hug friends and family hundreds of miles away. This technology truly holds the potential and could be greatly beneficial for disabled people. The technology is not just limited to the consumers as its having several possible use cases among the enterprises including retail, manufacturing, healthcare, automotive, education, and media & entertainment, defense, among other sectors. For example, doctors could monitor patients and offer care remotely. Businesses could truly hold lag-free virtual meetings. The internet of senses has the potential to greatly reduce the need for traveling or even offices.

Increasing Shift Towards Sustainability is Expected to Fuel the Adoption

Today, sustainability became a major important aspect for consumers as well as businesses. This can be attributed to increased carbon emissions due to the consumption of non-renewable energy sources. To create a sustainable future for the upcoming generations it has now become a priority for all the citizens of the globe. The internet of senses technology has the potential to greatly reduce carbon emissions and create a sustainable future for the coming generations. This is because, all the citizens will be online by 2030, and thereby, there will not be a need to travel from one place to another for meetings, office, medical assistance, etc. The internet of senses would make businesses operate more sustainably.

Wireless technologies such as 5G is now rolling at a rapid pace all over the globe. This advancement has increased the use cases of augmented reality and virtual reality. Connected cars, connected homes, and connected business processes are becoming more common as this was just a concept before decades. Today, the technological advancements in wireless technology have made several things possible and are expected to create a massive revolution in connected technology. The internet of senses is expected to gain new heights with the introduction of 6G technology in the next decade.

Although the internet of senses is promising and would greatly enhance the connected experience, some concerns are surrounding the technology. These concerns stem from the fact that the technology is currently pretty expensive and has privacy risks. Although many of the mentioned technologies are not on the market for consumers, those that have been quoted with prices come at a steep cost.  Owing to such high costs associated with these digital multi-sensory devices, there is worry about how easily the technology will be adapted unless prices drop significantly.

Furthermore, data privacy concerns in the internet of senses are also expected to be a major restrain. As advertisers will leverage individuals’ personal digital sensory information. Ultimately, the data that is leveraged by the internet of sense is very personal & critical information, and the use of this data tells marketers a lot about an individual. As these technologies become extensively used, digital data laws will have to begin to regulate the use of this sensitive data.

From immersive entertainment to online social gatherings and digital malls, digital sensory experiences have the promise to completely reshape several industries. They will open fully new avenues for value creation, unlock novel ways for brands to connect with consumers, and will transform how we perceive the life around us. In the years to come, digital malls may be able to offer smell, taste, and texture to make online shopping experiences indistinguishable from buying things at brick-and-mortar stores. Digital taste manipulation could revolutionize the food sector altogether by offering new taste experiences without any health drawbacks. In addition, in the media & entertainment sector, films and advertisements could be experienced in an entirely new, fully immersive way. Therefore, immersive entertainment and online shopping are expected to open new avenues for the Internet of Senses Market.

Associated Development Complexities Such as Bandwidth and High Accuracy Synchronization

There is still a long way to go for the internet of senses to become reality, and numerous challenges to overcome. Transmitting and receiving all human senses will require extensive bandwidth and high accuracy synchronization between the different data flows. Low latency levels of around 10ms will also be needed in order for natural interactions, such as shaking hands, to be able to happen in real-time. Therefore, bandwidth and high accuracy synchronization is the major challenge in front of the technology developers. However, with the advent of low-latency future wireless technology, the challenge will be overcome in the forthcoming years.


The pandemic forced lockdown situations across all the major economies and imposed numerous restrictions such as travel barriers, closure of the shops and markets, work from home, import-export ban, and others. Governments all over the globe made various guidelines to stop the further spread of the COVID-19. Despite this, the coronavirus cases increased significantly and continue to rise. The COVID-19 pandemic hit all the major industries such as manufacturing, trade, hospitality, leisure, oil and gas, tourism, automotive, transportation, among others.


The 5G rollout was postponed or affected in some of the countries due to the unexpected outbreak of the pandemic, however, some countries spend billions of dollars and considerably expand the 5G network during the unprecedented time. China is the major country that has expanded the 5G at a rapid pace and the country now reached 450 million 5G users. Other than that, South Korea and the US also deployed 5G during the pandemic at a larger scale and this deployment is expected to support the early possibility for the internet of senses technology.

YOY Growth to Expand at a Strong Rate

According to MRFR, the internet of senses market is expected to witness XX% to XX% percent YOY growth every year during the projected period. Increasing shift towards sustainability is expected to fuel the adoption, advancements in wireless technologies coupled with increasing connected technology, and rising consumer expectations towards the helpful uses of connected technology are some of the major growth drivers of the Internet of Senses market during the projected period.

The global Internet of Senses Market has been segmented into component, technology, application, end user, and region/country.

Based on the component, the Internet of Senses market has been segmented into hardware, software, and services. Hardware is further categorized into devices and sensors.

Based on technology, the Internet of Senses market has been segmented into Artificial intelligence (AI), Virtual reality (VR), Augmented reality (AR), and others.

Based on the application, the Internet of Senses Market has been segmented into hearing, sight, smell, taste, touch, and mind.

Based on the end-user, the Internet of Senses Market has been segmented into consumers and enterprises. Enterprises further bifurcated into retail, manufacturing, healthcare, automotive, education, media & entertainment, aerospace & defense, government, and others.

The global internet of senses market is expected to gain significant revenue from the various continents during the projected period. The geographic analysis of the global Internet of Senses market has been conducted for North America, Europe, Asia-Pacific, the Middle East & Africa, and South America. North America is further classified into the US, Canada, and Mexico. Europe is further classified into the UK, Germany, France, and the Rest of Europe. The Asia Pacific is further segmented into China, Japan, India, South Korea, and the Rest of Asia Pacific.

The Asia-Pacific region is expected to be early adopter of the internet of senses technology by 2030. This can be attributed to the rapid development and expansion of 5G networks as compared to the other region. China and South Korea are the leading countries and noteworthy development and adoption has been done in shorter period of time in the deployment of 5G. These countries are also pioneer in terms of the 6G vision. For instance, China also has initiated the 6G strategy by launching "the world's first 6G satellite" into space to test the technology. South Korea is not behind in this race, South Korea’s Ministry of Science and ICT established a 6G R&D implementation plan that calls for investing around $194 million by 2025 in six focus areas. 6G will play a significant role in the digital senses experience and the APAC region is expected to be the early adopter of the revolutionary technology “The Internet of Senses”.

Ericsson responsible for research into current and emerging trends – with a specific focus on how they are being used in the real world today, and what that might mean for tomorrow. After the introduction of connectivity era “The Internet of Senses” by the Ericsson, this technology is now a hot topic all around the globe and several other players are expected to join this race to become this connected technology into reality.

List of Key Companies Covered in this Internet of Senses Market Report:

This study estimates revenue growth at global, regional, and country levels and offers an overview of the latest developments in each of the sub-sectors from 2021 to 2030. For this analysis, MRFR segmented the global Internet of Senses market has based on component, technology, application, end user, and region/country.

Which region can dominate the global Internet of Senses market in 2030?

The Asia-Pacific region is expected to be an early adopter of the internet of senses technology by 2030.

Which application will be lucrative in the global Internet of Senses market by 2030?

The touch segment is expected to be lucrative for the market during the forecast period.

Which vertical will be the largest contributor to the global Internet of Senses market by 2030?

Retail and media & entertainment is expected to be the largest contributor to the internet of sense market by 2030.

Who are the key companies of the global Internet of Senses market?

Telefonaktiebolaget LM Ericsson is the key company in the internet of senses market.

EXPECTATIONS TOWARDS THE HELPFUL USES OF CONNECTED TECHNOLOGY ARE THE KEY DRIVERS EXPECTED TO BOO...