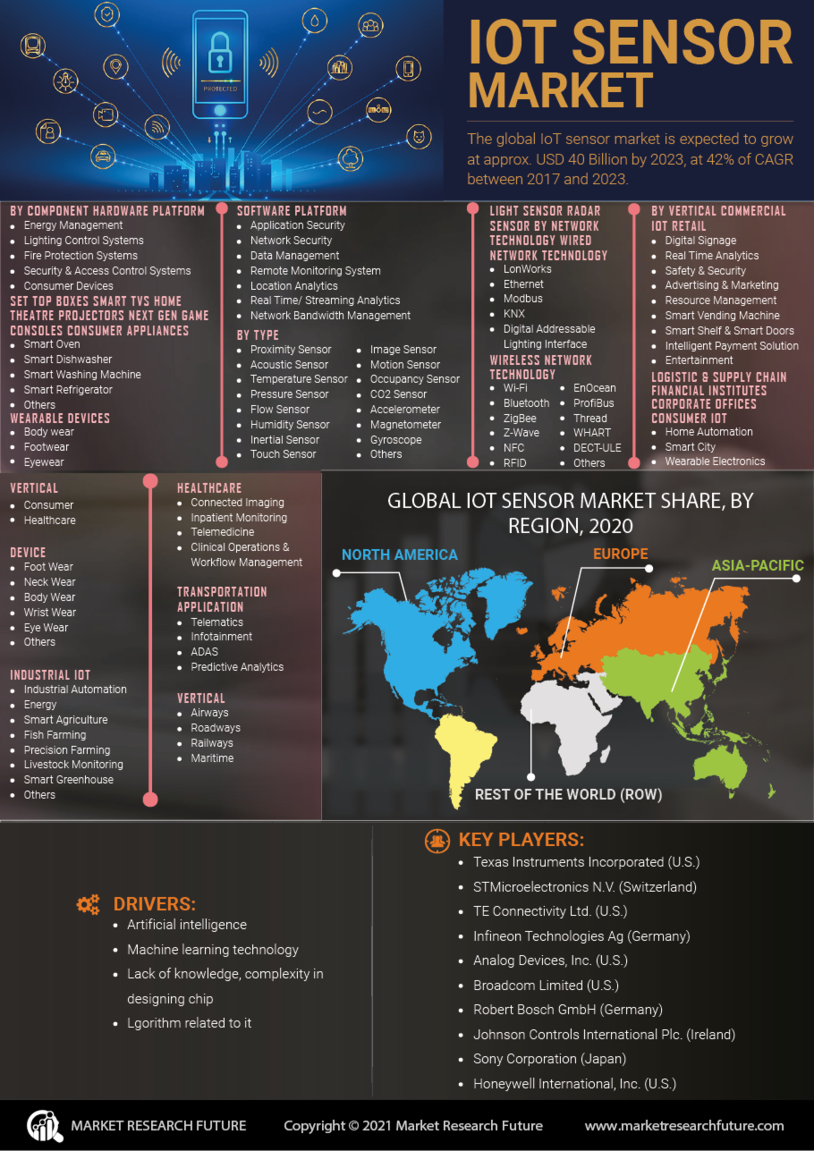 Globally, the size of IoT sensor market is expected to grow at approx USD 41.4 Billion, at 28.30% of CAGR between 2022 and 2030 driven by increasingly used in IoT Applications designed for the consumer, health, and automotive products.

The report indicates that IoT Sensors Market Size has been growing due to the high use of sensors with the increasing demands of wearable devices. In the fast-paced market, organizations and individuals as well, demand convenience and accurate information. Also, there is an increasing demand for internet penetration rate along with essentialities realized for real-time computing in IoT-operated applications.

Technological companies like IBM Corporation, Apple, and others have been highly investing in the IoT sensor Market as the demand from commercial, consumer and industry are increasing. Wireless IoT sensors provide accurate information on which informed decisions can be made by users. Supportive government policies like funding, cross-domain collaborations along the adoption of IoT amongst small and medium companies have also increased the growth of IoT sensor market.

From the end of 2019, the world has been facing an outbreak of a pandemic. Covid- 19 has reduced the growth of IoT sensor market by approximately 15-20%. This owns to the declination of industrial projects, shutdowns of many non-emergency production facilities, reduced prices of crude oil. The IoT Sensor Market is also greatly impacted by short-term disruptions in the supply chains. However, COVID-19 has provided opportunities for higher adoption of IoT devices which will increase the growth of the IoT Sensor Market Size.

The companies are expected to make use of sensors in the supply chain and production facilities for predicting futuristic demands. This will help in optimizing production, distribution, and selling that will reduce costs and help in increasing sustenance. In individual contexts, series of lockdowns in many countries has resulted in detrimental mental health hazards. It has prompted individuals to shift to healthy lifestyles which have also increased the demand of IoT application. Organizational and Individual factors are expected to lead the growth IoT sensor market by the year 2030.

Sensors are being increasingly used in IoT Applications designed for the consumer, health, and automotive products. Sensor size has been reduced which also increased the adoption of MEMS (microelectromechanical systems). In the last 5 years, small-sized sensors are majorly deployed in smartphones, drones, robots, and others. This has increased the growth of the IoT sensor market size.

The use of IoT applications has increased in the last few years. Along with this, data breaches and security concerns have also heightened. All IoT platforms are data-driven, due to which, a piece of huge information is generated per second. Industries and other commercial units apply various types of sensors for monitoring data and making an informed decisions. It has become important for ensuring the reliability, resilience, and security of all IoT devices which collect information. The data privacy concerns are increased as IoT platforms have high connectedness with various devices which provides many decentralized points for the entry of malware. If the security of all devices is not ensured, it might be used for misusing the information or harming other devices.


The opportunities for IoT sensor market have increased organizations in all sectors are willing to use predictive analysis for making informed decisions.  The governments of many countries are supporting IoT innovations. Funding is being done for inventions in smart traffic, energy conservations, and smart cameras.  The support by the governments is crucial for the growth and development of IoT sensor market.


Delay in funding due to adverse market scenarios

Since, the outbreak of the pandemic, many manufacturing units are shut down. On the contrary, many service organizations are being operated on half capacity which has restricted earnings. Governments around the world are focusing on vaccinations and other advancements for combating the pandemic crisis. Hence organizations involved in IoT developments are likely challenges for attracting funds for the innovations. Lack of funds will also challenge the growth and market in IoT sensor devices. In addition to this, lack of technical knowledge, high consumption of power by IoT smart devices, restricted bandwidth, and latency is expected to major challenges in the future.


It is estimated that the growth will occur majorly in APAC countries like India, China, South Korea, Australia, and others. Increasing comfortability in every sector will lead to the growth of IoT devices. This will further boost the production of sensors thus improving the growth rate of IoT sensor market.


Smart devices are being increasingly used in commercial and non-commercial sectors. Hospitals are also considering the development of IoT sensor devices to manage high patient counts in remote locations. Modern architecture is making use of sensors for predicting the intensity of sunlight for managing the use of artificial lighting. Similarly in every sector or even in personal IoT has played a significant role. Due to the pandemic, many industries and companies are suffering losses which has opened opportunities for predictive analysis.

Increased requirements for connected devices can be considered as major factors for the growth of IoT sensor market. The IoT sensor market can be segregated into different categories which are described below.

It is estimated that North America will capture the largest part of the IoT Sensor Market. On the contrary, Asia- Pacific will grow at the fastest rate in the development and growth of IoT-related products/ markets. North America will occupy the largest market share due to the region’s increasing demand for IoT sensors and technical advancements.

Also, Asia- Pacific is the largest contributor of raw material while nations like South Korea and China are technically advanced. Hence, the growth of sensors used in IoT will high.

Texas Instruments launched zero-drift hall effect sensors in July 2020. This device will be of high use in industrial motor drives, solar inverters, equipment of energy storage, and supply of power.  Texas Instruments claims that the device shall enable low drift with accurate time and temperature details for the management of AC/DC voltage systems. At the same, TE connectivity introduced LVDT position sensors.  These sensors are potential solutions for the hydraulic application in ICT equipment and machinery tools. This device can be customized as per industrial requirements.

Besides, NXP Semiconductors announced acquiring wireless connectivity tools from Marvell in the year 2019. In 2018, another developed was made STMicroelectronics with high accurate MEMS sensors. This device has 10-year life with advanced sensing capabilities in industrial sensing.

The report includes forecasting of IoT sensor market till the year 2030.  The factor driving the growth includes COVID-19 impacts, segmentation analysis, challenges, opportunities, competitive landscape, regional evaluation. The information for the report has been obtained from various sources of primary and secondary elements.

What is the worth of the IoT sensor market?

By the year 2030, it is expected that the IoT sensor market will be worth USD 41.4 Billion.

What are the driving factors of the IoT sensor market?

Why the demand for IoT devices/ sensors has increased in some years?

It provides accurate information through which informed decisions are taken. In commercial units, it is majorly used for reducing costs and obtaining valuable information from the predictive analysis.

Which verticals will impact the IoT sensor market?

The consumer verticals are expected to depict a higher growth rate till 2030.

Covid- 19 has made a significant impact on the IoT sensor market. Many companies are facing a monetary crisis that has impacted their investments in the IoT sector. However, in the long run, there are high opportunities for growth as the majority of the companies will adapt the predictive analysis for making present and futuristic decisions.

Which company or country is the leading IoT sensor market?