Helicopter Lighting Market: Information by Type (Interior Lighting and Exterior Lighting), by Application (Civil and Military), by Vendor (OEM and Aftermarket), by Technology (Traditional, LED and Others) and by Region — Global Forecast till 2027 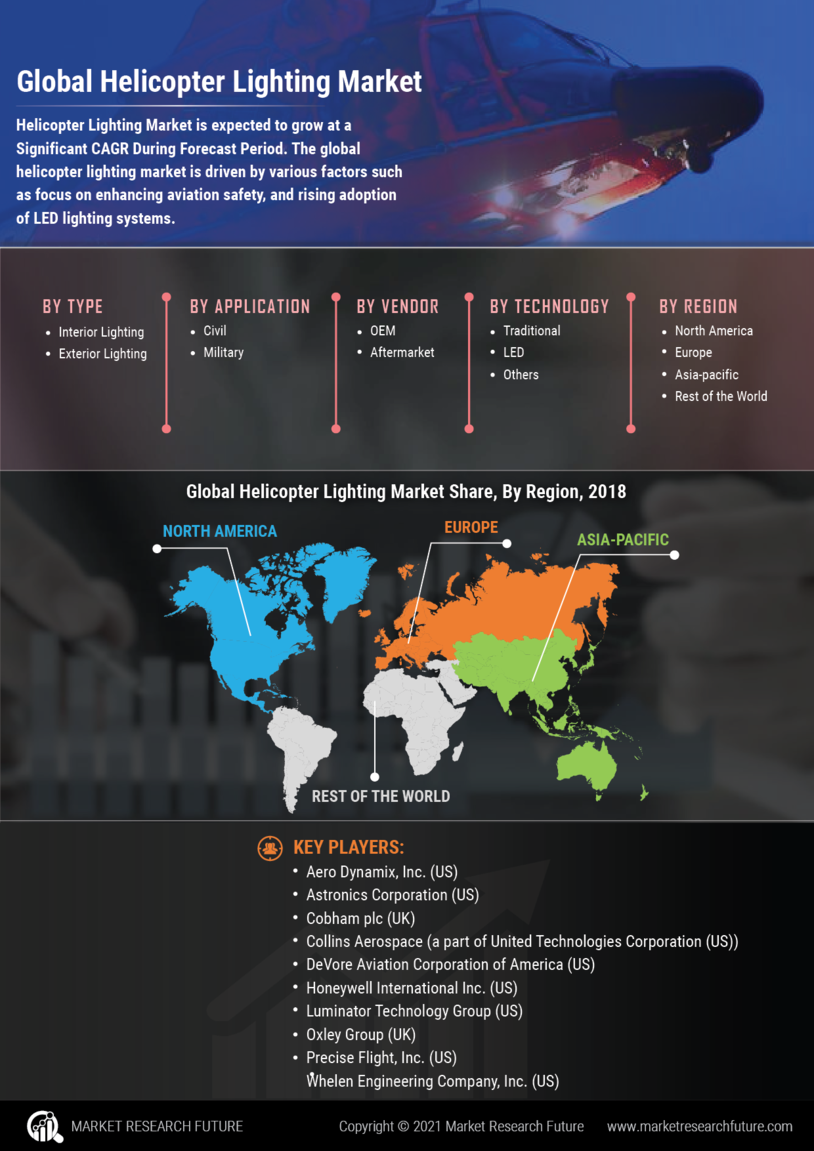 Furthermore, helicopter emergency egress lighting system (HEELS) is present inside the cabin which aids in evacuation during emergencies. Most of the above-mentioned external lighting are mandated to be present in helicopters by various agencies including the FAA for safe operations.

The global helicopter lighting market is driven by various factors such as focus on enhancing aviation safety, and rising adoption of LED lighting systems. Furthermore, the aircraft modernization programs being adopted around the globe and increased retrofit of existing rotary-wing aircraft is further imparting market growth.

Meanwhile, defense budget cuts especially in developed regions hinders the military helicopter lighting market growth to a certain extent. However, increasing use of helicopters for rescue missions, and by law enforcement agencies create promising growth opportunities for the market.

The global Helicopter Lighting market is estimated to register a CAGR of more than 3% during the forecast period of 2018 to 2023.

Based on type, the exterior lighting segment accounted for the largest market share as it is a critical component that aids in navigation and landing/takeoff of the helicopters. Based on application, the civil helicopter segment accounted for the largest market share. Owing to the mandates by several agencies such as the FAA, commercial helicopters operators are installing helicopter lighting especially the anti-collision lights to comply with the requirements and enhance aviation safety. Based on vendor, the OEM segment accounted for the largest market share. OEM segment covers the market for lighting system procured by the helicopter manufacturers. These OEMs are predominantly present in Europe and North America, thereby, resulting in higher market size in these regions. Based on technology, the helicopter lighting market is divided into traditional, led and others. According to the Department of Energy, LED lights use 75% less energy than incandescent lighting, and because they have a longer life, they require less costly replacements and fewer hours spent on the ground for maintenance. LED lights used in helicopter also contributes to the overall weight reduction in the helicopters (they are about 40% lighter than incandescent bulbs), therefore increasing fuel economy. Hence LEDs are being widely preferred by the OEMs (helicopter manufacturers) as well as the operators.

North America is the leading region for the global helicopter lighting market. Several major helicopter manufacturers (such as Boeing, Lockheed Martin) and lighting system providers (such as UTC, Honeywell) are present in the region, gaining the region a high market share. Moreover, Honeywell forecasts 4,000 to 4,200 new civil helicopter deliveries over next five years, which would create an opportunity for the major and prominent companies of the region

The market numbers and forecast derived were the outcome of our disciplined research methodology which includes secondary research, primary interviews, followed by data triangulation and validation from our in-house data repository and statistical modeling tools.

In this process, both demand side and supply side parties were involved to extract genuine facts and insights about market forecast, production, trend, and projected market growth. Industry stakeholders such as CEOs, VPs, directors, and marketing executives across the value chain have been approached to obtain key information.