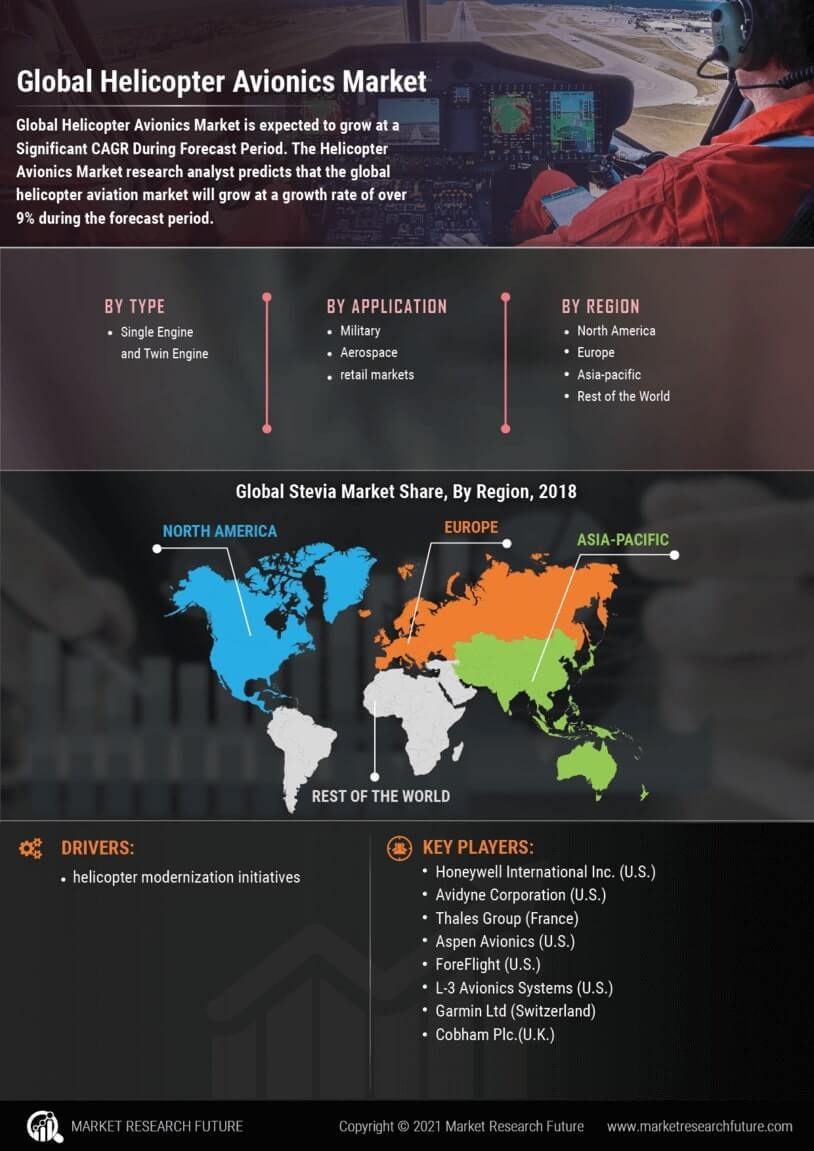 Helicopter Avionics Market Overview:The Helicopter Avionics Market research analyst predicts that the global helicopter aviation market will grow at a growth rate of over 9% during the forecast period. The aircraft's systems play an important role in the efficient movement of helicopters and require frequent updates at regular intervals to ensure the safety of passengers and crew. These systems provide pilots with critical data such as aircraft altitude, airflow, and airspeed with the help of accelerometers, aerial data sensors, pilot control rod sensor sets, speed curves, and other systems. Besides, some helicopters also use synthetic visual systems (SVS), which allow the pilot to have a clear view, even in low visibility conditions. Similar technological developments expand the aircraft's operational capacity and allow for savings. These advances in technology in the aviation field are the main drivers of several helicopter modernization initiatives. For example, Boeing, NASA, and Rockwell Collins collaborated to introduce cockpit aviation Helicopter Avionics Market System, such as car drivers, cockpit displays, and FCS.

Radiofrequency identification (RFID) tags are widely used to track Helicopter Avionics Market electronically. They are widely used in the military, aerospace, and retail markets. Production efficiency can be improved by RFID tags, as they allow manufacturers to manage their spare parts inventory. These labels allow manufacturers to authenticate their parts during purchase or use. Several maintenance companies can use this technology to quickly recognize defective parts, ensuring incorrect parts identification. High memory tags ensure a valuable supply of flying parts and can be used to ensure network access and information sharing.

Product segmentation and analysis of the Helicopter Avionics Market:Flight control systems dominated the market during 2015 and are expected to occupy maximum market shares during the forecast period. The integration of the advanced FCS facilitated the automation of several systems, in addition to improving the stability of the helicopter and minimizing the workload of the crew. The AFCS is equipped with sensors that provide data related to speed, payload, navigation information, engine controls, airspeed, and flight altitude. The FCS controls most artificial detection systems within an aircraft. Autopilot systems allow for automatic tracking and point-to-point navigation, ensuring safe helicopter operations. Currently, visual flight control (VFR) systems, stability enhancement, automotive systems, digital flight guidance systems, and digital FCS for helicopters are combined in one AFCS system.

According to one platform, the commercial aviation segment is the largest contributor to the aviation Helicopter Avionics Market during the forecast. The commercial aviation sector has experienced strong growth in recent years. This growth can be attributed to factors such as the increase in air travel, the increase in the disposable income of the petty-bourgeois population, and the increase in international trade and tourism worldwide. The strong growth in this sector has increased the number of aircraft orders to deal with the growing air passenger traffic. Manufacturers are currently focusing on aviation components to develop products that are more reliable, accurate, and efficient. Continuous software improvements have modified the aviation human-machine interface.

According to one system, the hardware segment is projected to lead the aviation Helicopter Avionics Market during the forecast:The hardware acts as an individual unit, providing a computer platform and various interfaces for other aircraft. It can also be integrated as a function across multiple platforms, such as integrated modular aviation cabinets (IMA). The control screen unit provides the main human/machine interface for data entry and information display. It performs functions such as navigation, flight planning, trajectory forecasting, performance computation, and guidance. To perform these functions, the flight management system interfaces with several other aviation systems.

Helicopter Avionics Market Size:Sales forecasted by regions and countries from 2021 to 2025 by the helicopter aviation industry. The helicopter flying market is based on their size, prospects, and their contributions to the entire market. The analysis of the helicopter aviation market has a current study and addition to the potential market resource depends mainly on the appearance of the company that competes in the current market, high factors and appropriate analyzes. Global Helicopter Aviation Market reports consumption by main regions/countries, type of product, and application. The Helicopter Aviation Market Report also mentions the accumulated market share for each product in the Helicopter Avionics market, along with production growth.

Helicopter Avionics Market Competitive scenario and key providers:Intense competition prevails in the global helicopter aviation market, where most participants compete for cost, product quality, reliability, and after-sales services. Several suppliers in the market aim to enhance their internal manufacturing potential, product offerings, global coverage network, and R&D investments to gain greater recognition from their peers. To stay afloat in the highly competitive market scenario, several vendors are focusing on newer technologies and supporting a strong customer base. Rockwell Collins and Honeywell Aerospace are the two main suppliers operating in this market, with a strong emphasis on the implementation of lightweight materials and robust systems.

Helicopter avionics manufacturers:Global Helicopter Aircraft Market Research Report Focuses on the major global helicopter Aviation manufacturers, to define, describe and analyze the sales volume, value, market share, market competition scene, analysis and development plans in the forecast. globe in separate parts based on industry standards. They also differentiate the market based on regions. The Helicopter Avionics report highlights mainly dominant participants in the regions. Other regions can be added accordingly. The Helicopter Avionics market consists of the structure identifying its various sub-segments.

Also, the region is a leader in global technological advances and, therefore, generates a very high demand for helicopter aviation systems. Although Canada is making some investments in the development of such advanced systems, the market depends primarily on the United States. The region accounted for the largest global market share in 2016, primarily due to the presence of major manufacturers, such as Honeywell International Inc., Garmin Ltd., and Rockwell Collins in this region. Therefore, the North American market expects a 10.72% growth rate during the forecast.

The growth of the global helicopter avionics equipment market:it is expected to grow at a considerable rate during the forecast, between 2021 and 2025. In 2021, the market is growing at a steady pace and with the growing adoption of strategies by the major players, the market is expected to grow above the projected horizon. scale and growth opportunities for the period 2021-2025. Provides comprehensive information on the latest company trends, forecasts, and market trends. Report Includes a detailed analysis of the growth drivers, challenges, and investment opportunities. It offers a complete overview of the segments and the regional prospects of the market. Helicopter Aviation Market Offers a complete overview of the supplier landscape, competitive analysis, and key strategies to gain a competitive advantage.

Main market participantsThales (France) is among the three largest suppliers and manufacturers of aviation in the world. Thales has introduced Avionics 2020, a fully connected helicopter aviation series that allows helicopter operators to detect flight data systems (FDMs) and increase fleet efficiency and safety.

Helicopter Aviation Market Trend:Development and market channels are analyzed. Finally, the viability of new investment projects is assessed and the general conclusions of the research are offered. Market forecast of helicopter aircraft by region, type, and application, with sales and revenue, from 2021 to 2025. Finally, this report deals with the market outlook and its growth prospects over the coming years, the report also concisely deals with the production cycle, comparing it with relevant products from all sectors already marketed, details the possibility for various applications, discusses recent product innovations and gives an overview of possible regional market shares.

Main issues addressed by the report:

The market is projected to advance at what rate in the period ahead?

The market is projected to advance at a rate of 10.7% in the period ahead.

Which engine type can take the lead in the near future?

The twin-engine type has been in the lead since 2016 in the global market.

What are the key system-based market segments?

Which helicopter type is touted to advance at a higher rate?

The military helicopter type is touted to advance at a higher rate.

Which region is expected to clinch the fastest growth rate in the following years?

Europe is expected to clinch the fastest growth rate in the following years.

What factors ensure APAC’s dominance over the market?

Factors that ensure APAC’s dominance over the market include the rise in helicopter modernization programs and the growth of the military sector.

Helicopter Avionics Market is projected to grow at approximately 9.76% CAGR by 2023