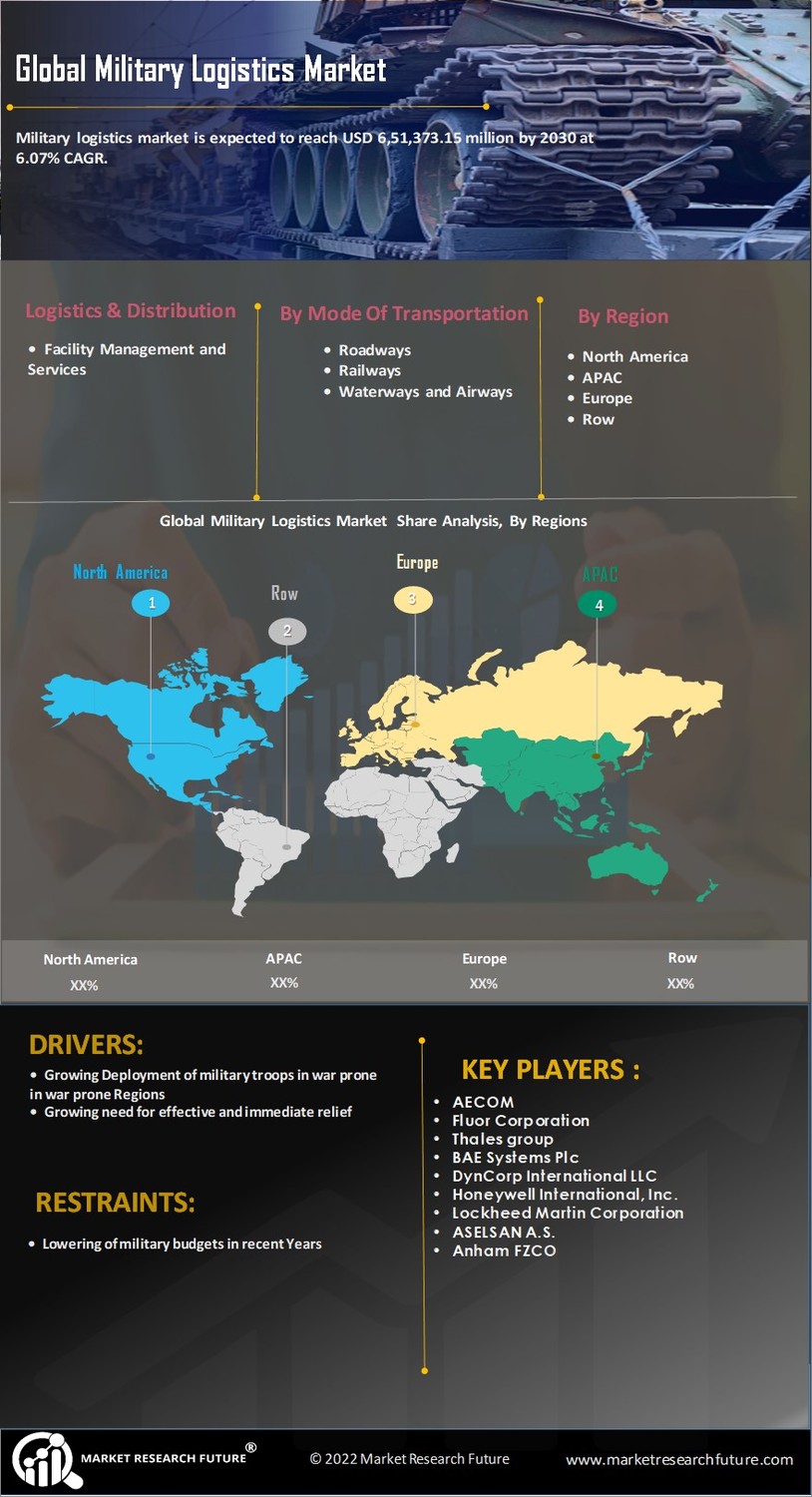 
Military Logistics is an integral component of the military that helps carry out quick, effective, and efficient transportation of food, troop, and arms and ammunition. In the prevailing times when the geopolitical setting is highly unstable, nations rely on their military strength to protect their national interest. According to the World Bank, in 2020, the U.S. spent around 3.7 % of its GDP on military expenditure. The high emphasis on military activities has played a major role in increasing the overall demand in the military logistics market.

An in-depth analysis of the market is conducted to identify its growth potential during the forecasted period. Varying factors have been identified in the market outlook, including opportunities, drivers, constraints, and threats. Each of these factors could contribute to market growth in the future.

The Covid 19 analysis has negatively impacted the performance of the military logistics market. Due to the pandemic, various national governments have diverted their spending towards the healthcare domain. It has led to a decline in investment in military-related operations. However, the market is expected to recover during the forecasted period, and its performance is likely to improve.

Chief variables existing in the market


Several factors exist in the military logistics market that increases its attractiveness, such as the increase in deployment of military troops in war-prone locations and the high need for immediate and effective disaster solutions in the unpredictable geopolitical setting. During the forecasted period, these elements could act as chief military logistics market trends that could influence the market growth.


The growth of the market could get restricted due to the presence of several challenges. One of the chief challenges that are likely to hamper market growth is adopting uniform processes to carry out military operations. The high level of unpredictability in the geopolitical setting could also act as a major challenge that could restrict the ability of market players to capture a major portion of their market share.


Several opportunities exist in the dynamic market that increases its attractiveness at the global level. For instance, there is an opportunity to integrate new kinds of digital technologies into the existing military logistics systems to increase the level of automation. Businesses operating in the market have the opportunity to align their strategy with the updated industry regulations so that they can operate flexibly.


Numerous restraints exist in the market landscape, which could diminish its growth potential. One of the major restraints is the decline in the budget that is allocated for military-related activities. Another restraint that could adversely affect the market's growth is the change in regulations that influence military operations and other military activities.

Cumulative evaluation of the market

A detailed military logistics market analysis has been presented in the report. Several variables in the market have been identified and investigated that could impact the market growth and revenue during the forecasted period. Some of the chief market drivers that have been identified include an increase in the need for disaster solutions all across the globe and the arrangement of military troops in war-prone nations and regions. The factors that can influence the market and its performance in the future have been critically examined.

Overview of the main market segments


The market can be categorized into logistics and distribution, facility management, and services based on the type. In the past, logistics and distribution have dominated the market setting. The chief factor that has driven the growth of the market segment is the application of new kinds of digital technologies such as the Internet of Things (IoT). During the forecasted period, the facility management segment is expected to witness growth owing to actors such as modernization and restoration of facilities undertaken by the military of diverse nations. Medical services such as evacuation and hospitalization are likely to play a key role in accelerating the military logistics market growth in the services category.


Based on the mode of transportation, the market can be segmented into roadways, railways, waterways, and airways. Transportation by road has been dominating the market in recent times. Some of the key factors that work in favor of the market segment include high safety and convenience compared to other modes of transportation. The railway segment is also expected to play a key role and contribute to the growth of the  market due to the ability to transport many troops. The demand for the waterways segment is high among armed forces when they transport oil, petroleum, and other substances. The airways segment has undergone considerable growth in the past, and it is evident from the development of specialized military aircraft like Airbus A400MAtlas and Boeing C-17 Globemaster III.

The military logistics market can be divided into several regional segments: Europe, North America, the Asia Pacific, Latin America, the Middle East, and Africa. The North American region has been playing a leadership role in the market. During the forecasted period, the region is likely to play a key role in the global market setting due to major market players' presence. Additionally, high investment in the military by the United States of America could also serve as a catalyst and contribute to the region's military logistics market revenue. The Europe segment is also expected to witness growth during the forecasted period due to the rise in investment in the R&D function to support smart logistics Automation. The Asia Pacific market segment is likely to register the highest growth in the future owing to the increase in investment in military activities by India and China to upgrade their existing military strength. Thus, based on the in-depth market outlook, every geographical region would contribute to the market performance during the forecasted period.

Competitive intensity in the industry

The competitive intensity in the market is extremely intense. A broad range of market players operate in the market setting and compete to increase their portion of the military logistics market share. Some of the chief business entities that have been dominating the global market have been listed below:

The military logistics market report highlights a diverse range of variables that could influence its growth potential during the forecasted period. The comprehensive market analysis has been performed using several strategic tools such as SWOT framework, PESTLE analytical tool, and Porter's Five Force model. The macro and micro factors that influence the military logistics market revenue have been identified and investigated in the report. Several factors have been identified in the market forecast that could influence the industrial performance, such as the surge in deployment of military troops by diverse nations and integration of new technologies in the military logistics domain.


By Mode of Transportation

What valuation can the Military Logistics Market reach by 2030?

The market is projected to advance at what rate during the forecast timeline?

The market is projected to advance at a rate of close to 5% during the forecast timeline.

What factors ensure market growth across the globe?

Factors ensuring market growth worldwide include the rising fluctuations in deployment of military personnel and the increasing use of technologies in military assets. The growing involvement of military in humanitarian relief can also positively mold the market size in the near future.

What can be a major market barrier in the forthcoming period?

A major market barrier in the forthcoming period can be the reduced military spending across a few countries.

Militaries in Europe are spending generously on research & development for smart logistics which could contribute majorly to the market’s growth.