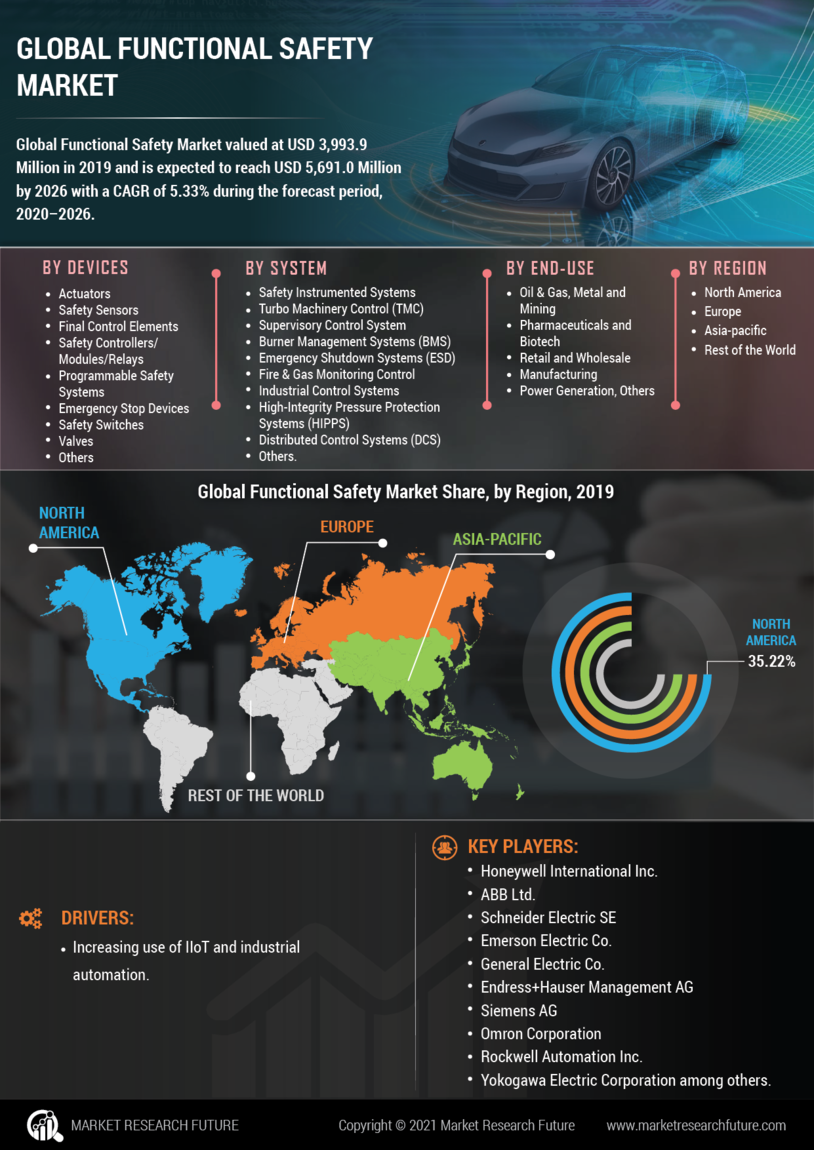 Globally, the size of functional safety market is expected to reach USD 22 billion, at a CAGR of 6.2% by 2030 driven by the increasing adaptation of IIoT in the industries.

Functional safety applies to all industries today, and it is increasing the demand of the manufacturers, and the end-users look to mitigate the risk further. With the growing use of automated equipment for manufacturing, testing, and process control, the need to avoid equipment damage, injuries, and environmental damage is more critical than ever. The growing demands and the expectations from the governments and all the workers have led the manufacturers and the suppliers to use predictable ways to achieve and design all the equipment to meet the specific safety requirements.

The efficiency of the safety system is not based on the regulatory and technical aspects but also on an in-depth functional analysis of the organization, production process, and the human factor. In the past, machinery safety was primarily considered the cost. However, presently safety technologies might be seen as an investment in business productivity. The products like safety switches and relays have become more common. With the adoption of integrated technologies and the approaches to safety, PLCs and safety mechanisms have also witnessed widespread use while having a limited impact on system engineering and planning.

The COVID 19 pandemic has imparted severe movement restrictions across the globe, which has reduced the overall production rates in several industrial verticals. The manufacturers and several industrial sectors have reduced the employees owing to the declining economic condition. Moreover, the stringent regulations have affected the supply chain and the overall manufacturing ecosystem, including the logistics. The raw materials or the manufactured components were not received in the proper hands. On the other hand, the commercial activities were halted throughout the pandemic, which has negatively impacted the overall growth of the Functional safety market.

The increasing adaptation of IIoT in the industries is creating new opportunities in the industrial sector. The data generated by the smart sensors are easily manipulated with the aid of IIoT technology. The IIoT technology facilitates the monitoring, analysis, and control effectively, such factors have increased the productivity rate and the demand for functional safety equipment.

A recent study reported that there were about 1.3 million workers suffered due to work-related illnesses; over 72,702 employee cases were registered every year for non-fatal injuries, and over 144 workers were died due to the incidences. Such reports have increased the functional safety market demand in recent years.

The increasing number of aged workers in the industries has also increased the overall growth of the functional safety industry. On the other hand, the established market players are increasing their investments in functional safety systems complying with the laws and regulations imposed on them.

The requirement to meet the stringent regulations and laws imposed by the government is also hindering the overall growth of Functional safety equipment across the industrial verticals. Moreover, the poor efficacy of the functional safety systems in the case of emergencies is considered as the primary restraint of the Functional safety market.

The developed countries such as the US were increasing the manufacturing and production processes and increasingly investing in the varied industrial verticals. Moreover, the economic condition of the developed countries has propelled them to adopt automated machines in the warehouses, manufacturing, and test and process control sectors. Therefore the equipment damage, environmental damage, and personnel damages tend to occur due to such factors.

The demand for safety sensors were gaining momentum in recent years, which are primarily deployed for machine guarding, personnel monitoring, body part protection, and other hazards. The sensors are capable of detecting the moving humans and thereby initiate the safety protocols before any incident. On the other hand, the stringent regulations imposed by governments across the globe are considered as the major growth-stimulating factor for the Functional Safety market. Especially, the regulations imposed by European countries emphasize reducing the number of accidents in the workplace while enhancing the working conditions for improved productivity.

The actuators, sensors, final control elements, relay, safety switches were increasingly deployed in the manufacturing plants, where the automated systems were prevalent.


Based on End User:

Currently, North America is holding the largest functional safety market share among other major countries, with a market share of 35.22% since the year 2019. The market value of North America in the year 2019 was USD 1406.7 million and the functional safety market is expected to grow with a steady CAGR of 6.2% during the forecast period. On the other hand, the countries in the Asia-pacific region such as China and India are increasingly accepting the international functional safety standards and therefore expected to showcase growth during the forecast period.

ABB announced distributing the control system 800*A, improving the collaboration with several new features, including the simplified, faster commissioning of the greenfield projects and the brownfield expansions with a new and improved Ethernet I/O Field Kit.

What is the growth scope of the functional safety market?

Who are key players of the functional safety market?

What are functional safety systems?

What are functional safety market drivers?

Upgradation in robotics and increased use of automated devices are expected to boost the functional safety market growth.

Which region is expected to show the highest growth for the functional safety market?

The growing adoption of MBaaS to update various application and security solutions to smartphones is observed as a cause that is expected to cause the Europe functional safety market to generate the highest valuation.

Functional Safety Market is Expected to Showcase Rampant Growth Over 2030