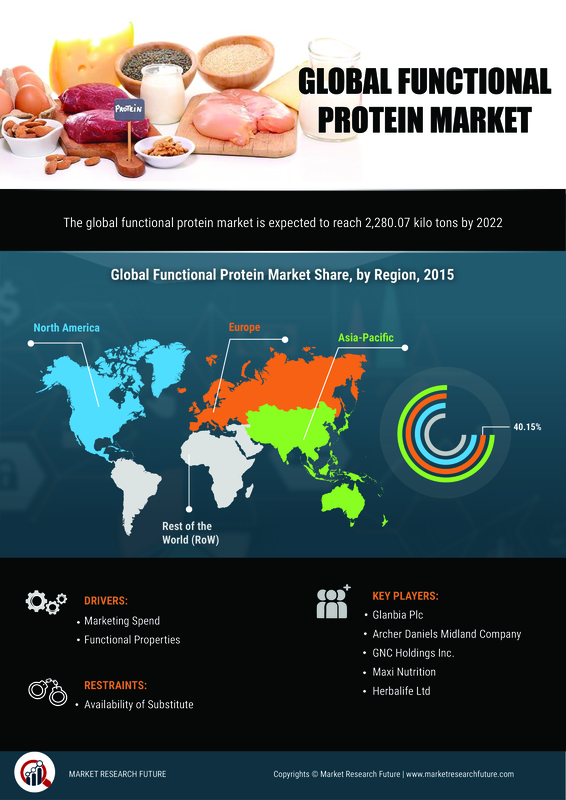 The global functional protein market is expected to reach 6.87 million by the end of 2030. Also, the CAGR of the market by 2030 is estimated to be 4.10%. The proteins are broadly classified into functional proteins and non-functional proteins with the increased demand for functional protein, the market has witnessed tremendous growth over the last few years. The major drivers that have been bringing the development in the market are the increase in nutritional protein demand in sports and digestive nutrition. Other factors driving the market are the consumer preferences that have been shifting to a different angle, raising awareness of the population, increasing the rate of the millennial population, and increasing the income of the consumers. With so much growth in the industry, even the organizations that are new in the field are getting so many opportunities. Also, some other factors contributing to the growth are an increase in the rate of chronic diseases and the changed lifestyles of almost every individual.

COVID-19 has bought a change in the lives of everyone on the planet. This change is significant and is expected to affect everyone's life for a much more extended period. Businesses across the world have been involved at all levels. But this is also the time when they need to start rebuilding whatever they have lost and prepare themselves for the future. The reports have detailed notes on the qualitative and quantitative analysis of the market size and the current market scenario. The accounts also have discussions about the technological advancements and the brief about various significant players in the market. The strategies and the plans these major players have been implementing enable the business owners to set up their work according to the market standards. Moreover, there is a lot of chance for the business owners and the staff to self-analyze themselves and work on their drawbacks and strengthen the areas they are already strong at.

The industry driver: Apart from the population becoming conscious about health each day, chronic diseases have also risen. Conditions such as cholesterol, diabetes, and obesity are major driving factors for the market.

There is no denying that people are getting options for diseases like obesity and other lifestyle-related disorders with the advancement in technology. But these come with a cost of high budget.

This is one of the biggest challenges that the market has to face. There are multiple health benefits that these come along with, but the taste it has is something that most of the consumers don't like; hence drop the idea of consuming these.

The market is divided into various subtypes:


Based on type: Based on the type, the market is further subdivided into:

Based on source: Based on the source, the market is sub-categorized into the following:

Based on the form: Based on form, the market is subdivided into:

Based on application: Functional classification of protein is as follows:


On the one hand, plant protein will witness a high growth rate of 4.29%, which is also expected to touch a value of 10160 kilotons by 2030. The reason that has been making the manufacturing of animal protein easy is the quick availability of the raw material. The factor that has been increasing the plant protein market's growth is the increase in the production of soy and other natural materials.

Supermarkets will dominate the Functional classification of proteins with a share of 26%. With an estimated projected score of 600 kilotons, it is expected to reach a CAGR of 4.10%

Based on regions, the market is divided into the following categories

The area that is estimated to dominate the market is that of Europe. It shares a market portion of almost 35%. It is estimated that its market share would reach more than 828 million kilos by the end of 2030. The expected CAGR would be approximately 2.36%. The Asia Pacific region will witness a growth rate of 4.10% during the forecast period 2022-2030. North America is expected to touch a growth rate of 4.88% in the functional protein market. The significant factors that have responded to the market's growth in these regions are the popularity of sports nutrition and the nutrition demands for weight management. In the Asia Pacific region, the primary driver has been increased awareness about the benefits of adding functional proteins to the diet. Nothing works better than a proportionate number of functional proteins in the diet. While this is something that has been accepted worldwide, the global functional protein market is all set to witness a record high in the next few years.

Recent developments in the market are as follows:

The report prepared by the experts in the industry and the analysts has details of the macro and micro-markets for the global functional protein market. It also estimates the market size based on function, source, distribution channel, and delivery format. It clarifies the understanding of the supply and demand chain of the functional protein in the market. Their region and the country-wise analysis of the market are also provided. They can enable the business to self-analyze themselves and work accordingly on the areas where they lack focus. The reason that profiling of the key players of the market is also mentioned in the report is for the business to take a deep look and the strategies and plans that these players have been implementing that have made them reach the level they are at the moment. The present market scenario and the historical trends and technological advancement are also included in the report.

Does the report have the estimations of the market size at the country levels?

The report includes numbers at regional and country-wise levels.

Mention the names of the key players in the functional protein market?

In how many regions is the market divided?

The market is divided into four regions: Europe, North America, Asia Pacific, and the rest of the world.

What are the subcategories of the functional protein market-based in the form?

Based on form, the market is subdivided into two types Dry and liquid.

How is the functional protein market divided based on the source?

Based on the source, the functional protein market is divided into two categories: Plants and animals.

The Functional Protein Market is anticipated to increase at a CAGR of 4.10% By 2030