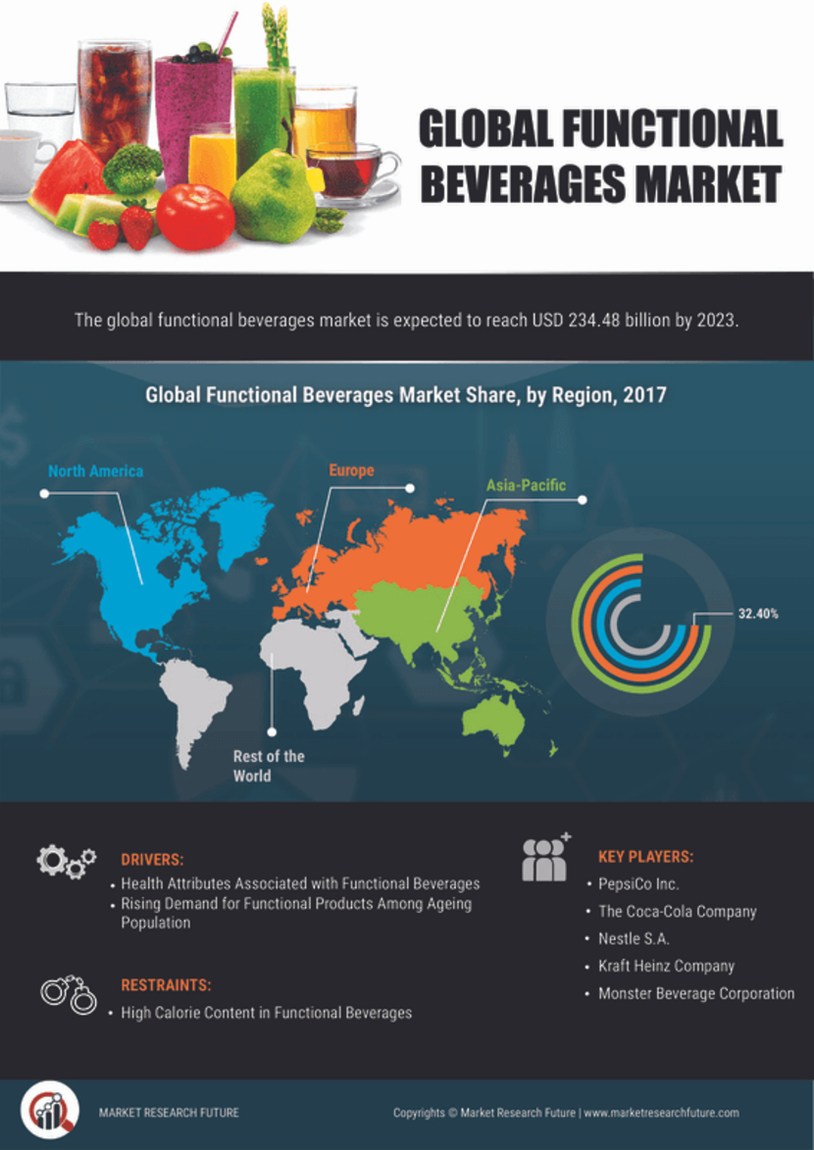 The COVID-19 outbreak has wreaked havoc on the food industry, with the lockdown forcing the closure of manufacturing plants and the halting of various activities. In light of the disastrous impacts of the SARS-CoV-2 pandemic, players are concentrating on strengthening their supply chains and speeding up their manufacturing processes to develop a wider range of functional beverages and avoid further revenue losses. Enhanced fruit drinks & juices, as well as energy drinks, should benefit the market over the analysis period, thanks to rising health consciousness as a result of the new coronavirus and the resulting growth in demand for sports & performance drinks. The continuing COVID-19 pandemic is being viewed as a once-in-a-lifetime occurrence that will have a significant impact on health issues as well as eating and drinking habits. As consumers seek to reduce their risk of sickness, this will increase demand for functional items that assist boost immunity. When it comes to such products, they must be considered affordable and trustworthy in terms of health claims. However, COVID had a bad impact on the business and industry line, but it is still possible to increase market trends and functional beverages market growth.

Manufacturers' main marketing methods, which might result in strong functional beverage market expansion, are product advancements and their increasing release in local flavors to attract a larger number of customers. Manufacturers are following some of the top market trends, such as attractive packaging designs and a growing desire for green packaging. The rising popularity of natural ingredients in functional beverages has piqued the curiosity of a variety of health buffs. Additionally, prominent companies' promotional initiatives to build brand recognition open up new growth opportunities for the functional beverages market. The growing popularity of e-commerce, together with the expanding retail sector, can create significant changes for global market leaders. Due to decreased infrastructure and communication costs, established vendors of functional beverages are gravitating toward online platforms. E-commerce allows businesses to easily reach out to a larger customer base, resulting in Functional Beverages Market Trends and the brand.

In the coming years, high costs connected with premium functional beverages and low purchasing power of customers in developing nations could be a major problem for functional beverages market Value. During the forecast period, the risk associated with energy drink usage and the availability of a healthy substitute is projected to restrain the growth of the market. The significant health risks connected with energy drink usage, for example, are primarily due to the caffeine level. Caffeine can produce hypertension, palpitation, dieresis nausea, central nervous system stimulations, and vomiting if used in excess. These are the major restraints that can decrease the Functional Beverages Market Outlook.

Functional beverages are a new product and concept for addressing food and beverage inadequacies, and their wide-area distribution necessitates the retail sector. In developing nations, the rapidly growing number of large retail outlets, such as supermarkets and hypermarkets, as well as specialty stores, has made functional beverages more accessible, as these stores help to boost product sales. The Functional Beverages Market Analysis is driven by increasing demand for novel goods such as plant-based and lactose-free beverage products. Thus, the companies have followed various technical aspects and have adopted technology for the production of beverages due to the increasing consumer demand.

The Functional Beverages Market Share is further bifurcated into various segments that will help the market grow as per the predicted CAGR growth by the end of the forecast period in 2028. The market has been segmented based on the following:

Based on the type, the market has been segmented as follows:


Based on the Distribution Channel, the market has been segmented as follows:

Based on the end-user, the market has been segmented as follows:


Based on the function, the market has been segmented as follows:


Based on the region, the market has been segmented as follows:

Europe holds the largest share of the global market in 2019. The European market is expected to grow at a significantly faster rate in the future years. Furthermore, North America has been the second market leader, and the Functional Beverages Market Forecast is predicted to alter. The wide selection of functional beverages offered by a large number of manufacturers, combined with appealing packaging that attracts new customers can help drive the market and increase the Functional Beverages Market Size. The APAC market is expected to rise at a high rate over the forecast period, owing to rising consumer awareness of health issues and a consequent increase in their choice of functional beverages. Because of the changing lifestyles of Asian consumers, convenience beverages are in high demand, resulting in sales of fortified/functional plant-based, malt-based hot drinks, and functional energy drinks growing steadily.

The Functional Beverages Market vendors use a variety of competitive methods such as acquisition, merger, and collaboration. Consumers' growing health consciousness is encouraging businesses to focus more on developing innovative, high-quality functional beverages to obtain a competitive advantage. The major key players included are:

The report includes a summary of significant barriers and drivers that affect the size of the functional beverages market, as well as important segments, geographies, and top vendors. The research examines the expansion of the functional beverages market across time, both historically and in the future. Apart from thorough market segmentation, the research also discusses the market revenue throughout the study period, as well as historical value in terms of volume and value, technological advancements, and the key factors driving the market growth. In addition, the Report profiles well-known firms with significant functional beverage market share, as well as the important competitive tactics they use to stay relevant.

At what CAGR is the Global Functional Beverages Market projected to grow in the forecast period (2018-2023)?

Functional Beverages Market is projected to grow at approximately 6.63% CAGR during the assessment period (2018-2023).

How much is the Global Functional Beverages Market worth in the future?

Functional Beverages Market is estimated to reach a valuation of approx. USD 234.48 BN by the end of 2023.

What are the major tailwinds pushing the growth of the Global Functional Beverages Market?

Increasing demand due to the growing healthy eating habits among consumers and increasing per capita disposable income, are major tailwinds pushing the growth of the Global Functional Beverages Market.

Which region holds the largest share in the Global Functional Beverages Market?

North America holds the largest share in the Global Functional Beverages Market, followed by Europe and the Asia Pacific, respectively.

Who are the top players in the Global Functional Beverages Market?

Danone accounted for the highest market share in terms of development and is projected to constitute 19% of the developmental share in the global functional beverages market. The company is majorly focusing on new product launches which are more healthy and nutritious for the consumers. For instance, in the first two quarters of the year 2018, the company launched about 4 functional beverages in different regions. Moreover, the company is also undergoing geographical expansion to make their presence prominent. Acquisition and joint-ventures are also witnessed to be a part of their strategic development in past few years.

The Coca Cola Company is anticipated to account for a share of 17% of the overall development in the global functional beverages market. This company is highly involved into diversified strategic developments. The company is focusing into new product launches offering a wide range of products to the consumers and is also undergoing strategic acquisitions to have a sustainable growth. It is highly involved into R&D and launch of new products widening their product portfolio. The company is also undergoing acquisition of small firms to increase its presence in the developing market. For instance; Xiamen Culiangwang, maker of plant-based protein beverages in China was acquired by Coca-Cola Company to expand their portfolio of beverages in China.

PepsiCo Inc. also holds a prominent place in the market with strong focus on product launch followed by expansion of their production capacity and geographical reach. The company is also focusing on launching new products frequently to increase their product offerings and compete in the market. For instance, in 2017, as a part of its expansion in functional beverages segment, PepsiCo India launched vitamin -fortified water product, the Aquafina Vitamin Splash.

Major manufacturers also are found to have a high focus on strategic product launch to seek consumers’ attention towards their product range. They are also involved in the strategic agreement which will further support the company to expand and reach out to consumers across the regions. Acquisitions are also made to mark the company’s presence and expand their business line. In the strategy analysis, product launch dominated the market accounting for a share of 45%. Product innovations and introduction of new flavors is what the players are focusing upon. They tend to increase their product offerings in the market to compete against their competitors. They are also inclined towards expanding their geographical presence and expanding their production capacity to fulfil the growing consumer demands. Moreover, acquisition is holding 21% of share in strategy market for functional beverages.

Additionally, the companies are inclined towards product promotions and strengthening their marketing base. The promotional strategy aids in retaining the existing customers and to regenerating new customer base.