Frozen Pizza Market: Information by Crust Type (Thin Crust, Pan, Stuffed Crust, and Others), By Category (Gluten-Free, and Conventional), By Size (Regular, Medium, and Large), By Distribution Channel (Store-Based [Supermarkets & Hypermarkets, Convenience Stores, and Specialty Stores] and Non-Store-Based) and Region (North America, Europe, Asia-Pacific, and Rest of the World)—Forecast till 2028

Frozen pizza market is projected to register a CAGR of 5.62% and reach a value of USD 18,424.4 million by 2028. Frozen pizza is referred to the half-baked pizza prepared by yeasted flatbread dough, which is typically topped with various types of fruits, vegetables, and meat. Frozen pizza is usually stored at a controlled temperature under 0 degree to preserve it for later consumption. Frozen pizza has a longer shelf life, owing to its low-temperature condition and preservatives used for increasing the shelf-life. The global frozen pizza market has witnessed rapid growth over the last few years and is projected to expand at a CAGR of 5.62% during the forecast period. Increasing consumer preference towards convenience foods is anticipated to act as a major driver in the growth of the global frozen pizza market during the forecast period. Additionally, the growth of the organized retail sector is expected to positively influence the sales of frozen pizza at the global level. However, frozen pizza is not cost-efficient for the consumers, which is anticipated to restrict the growth of the market. The development of the cold chain industry in the emerging economies is expected to create a lucrative opportunity for the manufacturers of frozen pizza.

The rapid proliferation of the COVID-19 pandemic has resulted in a global crisis. Impacting over 195 countries, the pandemic has already created an economic downfall worldwide. The global pandemic is deemed to create a chaotic environment, resulting in a global recession. With the rapidly increasing number of cases, the global frozen pizza market is getting affected in many ways.

The outbreak of COVID-19 has resulted in creating immense pressure across supermarkets & hypermarkets, convenience stores, and food suppliers, globally. This has led to an increased sale of convenience foods such as frozen pizza, as the consumers are stockpiling of shelf-stable foods. The stockpiling practice has led to a sudden hike in the market value of the global frozen pizza market in 2020 which will normalize post the stabilization from this outbreak. However, the lack of availability of frozen bakery product stocks in retail stores is currently one of the biggest concerns across the world.

Some of the pizza manufacturers are hiring personnel to keep up with the demand for the products as consumers are stockpiling comfort foods to get them through the pandemic. For instance, according to the American Bakers Association (ABA), the North American bakery industry is scaling up the workforce to meet the demand for fresh and frozen pizza. However, the biggest concern that remains is logistics. With the increasing number of COVID-19 infections globally, restrictions on vehicular movement are increasing. This is creating a demand and supply gap, thereby resulting in empty shelves in various retail outlets in many American and European countries.


The changing lifestyles, evolving dietary patterns, and availability of convenience food are factors that play an important role in defining the consumer’s food choices. The growing trend of consuming convenience food began in the western world and rapidly spread to other regions across the globe. Consumers prefer convenience foods as they are easy to consume and have nutritional value, variety, and product appeal. Due to changing lifestyles, consumers are spending less time planning and cooking meals at home, as they consider preparing food at home to be a time and energy-consuming process. The increasing consumption of convenience food is driven by the need to create more leisure time, which means that consumers look for options that would help them maximize their free time, doing the things they value more. This, along with the increasing per capita disposable income, is expected to increase the demand for frozen pizza. Frozen consumables are considered convenient as there is no need to put in a lot of effort to make these products edible. Frozen pizza can be prepared by simply heating the product in a microwave or oven. Thus, the rising demand for convenience food is expected to drive the growth of the global frozen pizza market during the review period..


Frozen pizza is generally costlier compared to freshly baked pizza. The manufacturers of frozen pizza are pricing their products higher as compared to fresh pizza owing to the costly production and storage process. Furthermore, this is not the only product available in the global market. Consumers can opt for fresh and other types of convenience foods, which are healthier in comparison to pizza. The oligopolistic market includes individual producers that are involved in price wars and charging prices according to their choice.


Liberalization, globalization, and growth of international trade, coupled with government support towards infrastructure development for the cold chain sector, are factors that have created growth and investment opportunities in multiple markets. The cold chain logistics market in developing countries is dynamic and constantly evolving. Due to the current demand-supply gap in the global market, the fragmented cold chain logistics market offers ample opportunities for new entrants to enter the market. Furthermore, cold storage is also a crucial factor and key component of food trade in various countries. Operations in the cold chain market have substantially improved in recent decades.

Based on crust type, the global frozen pizza market has been segmented into thin crust, pan, stuffed crust, and others. The thin segment accounted for the largest market share of 48.55% in 2020 and is projected to register a CAGR of 5.64% during the forecast period, while the stuffed crust segment is expected to exhibit the highest CAGR of 6.30% during the review period.

Based on the category, the global frozen pizza market has been segmented into gluten-free and conventional. The conventional segment accounted for a larger market share 84.16% in 2020 and is projected to register a CAGR of 5.52% during the forecast period, while the gluten-free segment is expected to exhibit a higher CAGR of 6.14% during the review period.

Based on the size, the global frozen pizza market has been segmented into regular, medium, and large. The regular segment accounted for the largest market share of 52.18% in 2020 and is projected to register a CAGR of 5.67% during the forecast period, while the large segment is expected to exhibit the highest CAGR of 5.81% during the review period.

Based on the distribution channel, the global frozen pizza market has been segmented into store-based and non-store-based. The Store-based channel is further segmented into supermarkets & hypermarkets, convenience stores, and others. The store-based segment accounted for a largest market share in 2020 and is projected to register a CAGR of 5.44% during the forecast period, while the non-store-based segment is expected to exhibit a higher CAGR of 6.41% during the review period.. 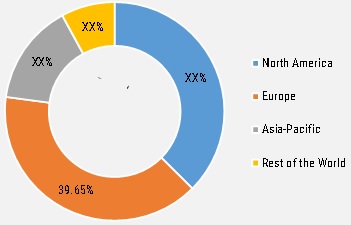 By region, the global frozen pizza market has been divided into North America, Europe, Asia-Pacific, and the Rest of the World. Europe accounted for the largest market share of 39.65% in 2020. North America was the second-largest market in 2020 and is projected to exhibit a CAGR of 5.71% during the review period. The market in the Rest of the World is expected to register a CAGR of 4.68% during the forecast period.

Europe accounted for the largest share of 39.65% of the global frozen pizza market in 2020. The regional market is expected to register a CAGR of 5.56% during the forecast period. The growth of the frozen pizza market in the European region is attributed to several factors. Premiumization is one of the major trends gaining traction in European countries. The consumers are opting for healthy pizza that contain whole grain, have high fiber content and are gluten-free. Also, the increasing consumer inclination towards convenience foods due to busy lifestyles is anticipated to act as a major driver in the growth of the European frozen pizza market. Moreover, consumers are increasingly opting for clean label products. Clean label ingredients are widely used in the manufacture of these products for visual appeal. According to the US Department of Agriculture (USDA), the sales of organic packaged food in Europe were valued at 34.37 billion in 2020. The consumption of organic food & beverages is especially high in Western European countries such as the UK, Germany, and France. Additionally, the manufacturers of frozen pizza have adopted expansion strategies to increase their presence across the European region. For instance, in September 2016, La Lorraine Bakery Group opened its production plant in Turkey. The new production plant caters to the increasing demand for frozen pizza across Turkey and Eastern Europe..

North America has accounted for a market share of 37.47% of the global frozen pizza market in 2020 and is projected to expand at a CAGR of 5.71% during the forecast period of 2021-2028. The frozen pizza market in North America has been experiencing rapid growth over the last few years. The growth can be attributed to the increasing consumer inclination towards ready-to-eat food products.

The market comprises tier-1 players along with some local players with diverse product portfolios. Companies such as Nestlé S.A. (Switzerland), McCain Foods Limited (Canada), Dr. Oetker GmbH (Germany), Daiya Foods Inc. (Canada), Palermo Villa, Inc. (US), dominate the market due to brand reputation, product differentiation, financial stability, and strong distribution network. The players are focused on lowering their environmental footprint and investing in research and development along with strategic growth initiatives such as acquisitions and product launches to strengthen their market position and capture a large consumer base.

Few developments that occurred in recent times influencing the market growth of frozen pizza are listed below:

At what CAGR is the Global Frozen Pizza Market projected to grow in the forecast period (2020-2028)?

Frozen Pizza Market is projected to grow at approximately 2.5% CAGR during the assessment period (2020-2027).

Which are the major segments in the Global Frozen Pizza industry?

What are the major tailwinds pushing the growth of the Global Frozen Pizza Market?

Rising popularity due to the ease of preparation, the demand for convenient and instant food products, growing numbers of working population, and the rising disposable income, are major tailwinds pushing the growth of the Global Frozen Pizza Market.

Which region holds the largest share in the Global Market?

North America holds the largest share in the Global Frozen Pizza Market, followed by Europe and the Asia Pacific, respectively.

Who are the top players in the Global Market?