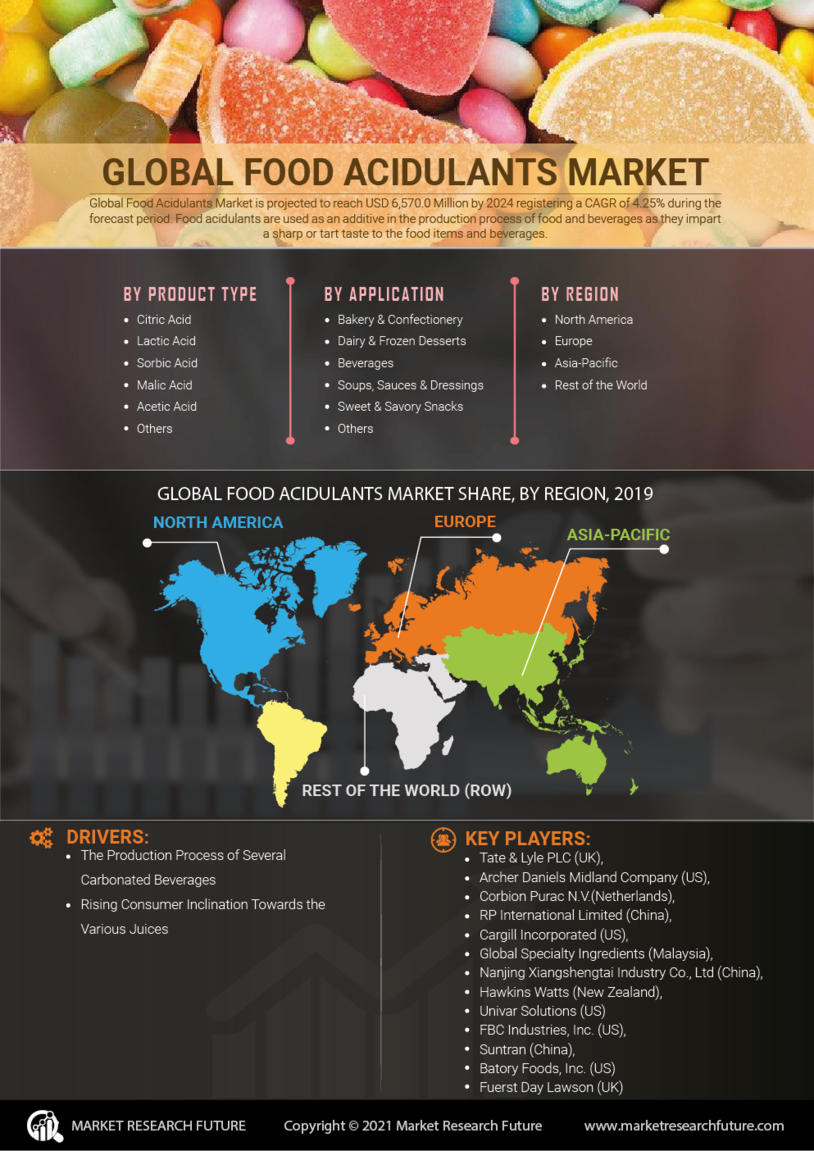 The market has been segmented based on product type, application, and region.

The food acidulants market has been classified, based on product type, into citric acid, lactic acid, sorbic acid, malic acid, acetic acid, and others.

The global market has been classified, based on application, into bakery & confectionery, dairy & frozen desserts, beverages, soups, sauces & dressings, sweet & savory snacks, and others.

The global market has been analyzed for four key regions—North America, Europe, Asia-Pacific, and the rest of the world. The North American food acidulants industry has further been segmented into the US, Canada, and Mexico.

The European market has been classified as the UK, Germany, France, Italy, Spain, and the Rest of Europe.

FBC Industries, Inc. (US), Suntran (China), Batory Foods, Inc. (US), and Fuerst Day Lawson (UK) are some of the key players in the  food acidulants market.

Among the regions, Europe is estimated to retain its dominance throughout the forecast period, 2019–2024, both in terms of value and volume. The growth for the market in the European countries is anticipated to be driven by several factors. One of the significant factors for the rising growth of food acidulants is the increasing consumption of bakery products by consumers in European countries. Due to the increasingly busy lifestyles, the consumers are more inclined towards the processed foods, which, in turn, accelerates the growth of food acidulants market during the forecast period. Germany and Italy are the major manufacturers of bakery & confectionery products across the Europe region. So, the market share of these countries is exceptionally high in these countries. However, Asia-Pacific is projected to witness a maximum growth rate during the forecast period. In Asia-Pacific, China is estimated to retain its dominance throughout the forecast period, 2019–2024. The production of food acidulants are high in China and the market is highly fragmented in China owing to the presence of several local and unorganized players. Additionally, India is also projected to expand at a massive growth rate during the forecast period in the region owing to the increasing consumer inclination towards the ready to eat food products.

Food Acidulants Market is expected to grow at a healthy CAGR of over 7.6%