The global Food Safety Testing Market is projected to register a CAGR of 7.1% and reach a value of USD 27,334.4 million by 2030. Food safety testing refers to the identification and quantification of contaminants present in the food. Food safety testing is performed to ensure the quality of food and reduce the incidence of foodborne illness.

The global food safety testing market is expected to register a notable growth rate during the forecast period. Increased outbreak of food-borne illnesses worldwide and implementation of stringent food safety regulations support the demand for food safety testing. However, limited supporting infrastructure in developing countries is restraining the growth of the market.


Incidences of food-borne illnesses have seen a rise globally in recent years. According to the World Health Organization, globally, approximately 1 in 10 people falls ill every year and 420,000 die as a result of eating contaminated food. The Centers for Disease Control and Prevention (CDC) has reported an increase in commonly reported food-borne pathogens such as Salmonella, Campylobacter, and E. coli. A report by the Foodborne Diseases Active Surveillance Network (FoodNet) stated that, in 2020, food-borne illnesses accounted for 25,606 infections, 5,893 hospitalizations, and 120 deaths in the US. To safeguard against the contamination of food by pathogens and toxins, government agencies across the world have set stringent regulations for the food processing and food service industries. Food manufacturers have to test for contaminants at each stage of the supply chain and thus have adopted advanced technologies and equipment for food processing, packaging, and storage. The demand for food safety testing is increasing across the globe to reduce the outbreak of food-borne illnesses and limit the economic burden placed on the healthcare industry. Additionally, the threat of bioterrorism is boosting the demand for food safety testing services.


The food processing industry in developing countries is highly fragmented and dominated by small-scale regional players. A lack of basic supporting infrastructure in countries such as Ethiopia, Cuba, and Bangladesh impedes the setting up of testing laboratories. Moreover, such countries do not have adequate frameworks for food safety testing due to various constraints such as limited awareness, economic instability, and a lack of government support. The minimal testing of food products during processing, storage, and distribution increases the risk of contamination and adulteration. Other key determinants limiting food safety testing are limited institutional coordination, shortage of a skilled workforce, non-availability of advanced equipment, and lack of updated safety standards. A strong foundation for food safety testing requires necessary infrastructure along with increased interaction and cooperation among regulatory authorities.

Based on contaminant, the Global Food Safety Testing Market has been bifurcated into pathogens, pesticides, toxins, GMOs, and others. The pathogens segment accounted for the largest market share of 63.72% in 2020 and the GMOs segment is expected to exhibit the highest CAGR of 7.5% during the forecast period.

Based on technology, the Global Food Safety Testing Market has been bifurcated into traditional and rapid. The rapid segment accounted for the larger market share of 55.39% in 2020 and is expected to register a higher CAGR of 7.2% during the forecast period.

Based on Food Type, the Global Food Safety Testing Market has been bifurcated into meat, poultry, & seafood products, dairy products, cereal & grains, processed foods, fruits & vegetables, and others. The meat, poultry, & seafood products segment accounted for the largest market share of 30.78% in 2020, whereas the Fruits & Vegetable segment is expected to register a CAGR of 7.5% during the forecast period. 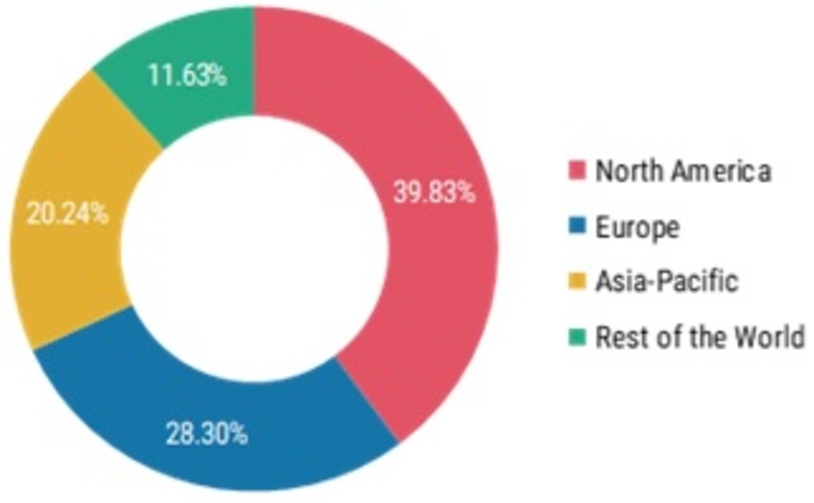 By region, the global Food Safety Testing Market has been divided into North America, Europe, Asia-Pacific, South America and the Middle East & Africa. North America accounted for the largest market share of 39.83% in 2020 and the market is expected to register a CAGR of 7.4% during the forecast period. Europe was the second-largest market in 2020 and the market is projected to exhibit a CAGR of 6.1%. However, the market in Asia-Pacific is expected to register the highest CAGR of 8.0%.

The North American food safety testing market is growing due to the high incidences of food-borne diseases caused by Salmonella, E. coli, and Listeria, among others. The regional market accounted for 39.83% of the global food safety testing market in 2020 and is expected to register a CAGR of 7.4% during the review period. The US dominated the North American food safety testing market in 2020. According to the CDC, Salmonella is a major pathogen causing food-borne illnesses in the country. The pathogen can spread through contaminated eggs, food, and cut fruit. Similarly, E. coli cases are caused by the consumption of contaminated ground beef, vegetables, milk, and apple juice. Changing consumption patterns, widespread outbreaks of food-borne illnesses, advances in food safety science, and the identification of new risks have resulted in various initiatives being taken by government agencies such as the FSIS. Such agencies have helped in reducing the outbreak of food-borne diseases, thus, reducing the burden on the healthcare industry. In Canada, stringent regulations regarding food safety are supporting the growth of the food safety testing market. The government emphasizes the inspection of imported food for quality and safety. The Canada Food Inspection Agency (CFIA) has expanded its reach to monitor chemical residue in food and ensure food safety by setting permissible levels for chemical residue. In Mexico, the Food and Drug Administration (FDA) and public health officials have been working together to increase the capacity and capabilities of laboratories used to test the safety of food. Their main purpose is to augment capacity, enhance communication networks, implement new food safety testing methods, and adopt systematic validation programs.

The European market accounted for 28.30% of the global food safety testing in 2020 and is projected to register a CAGR of 6.1% during the review period. Food safety is a key issue in the region with the rising concerns across Europe; as a result, various policies have been instituted to ensure the safety of the public. In Europe, food safety policies are monitored by control laboratories, national reference laboratories, and EU reference laboratories. Such authorities are focused on protecting consumer health by assuring the quality of food throughout the supply chain. The European Food Safety Authority (EFSA) undertakes the assessment and communication of risks associated with food contamination. In Italy, the largest exporter of chocolate and second-largest exporter of pasta in the world, concerns about the outbreak of food-borne illnesses due to pathogens in imported meat and poultry products have led to the implementation of stringent regulations. Similarly, in Russia, food trade must comply with safety rules and regulations to ensure the quality of the products.

Few developments that occurred in recent times influencing the market growth of gardening tools are listed below:

What would be the food testing market valuation by 2030?

What would be the CAGR for the food testing market during the forecast period of 2022-2030?

Food testing market CAGR would be 7.1% during the forecast period.

What are the food types included in the food testing market study?

Which region would dominate the food testing market?

Which region would be the fastest-growing food testing market?

The global food safety testing market is projected to record a CAGR of 7.1% during the forecast p...