Major players such as ABB, GE, and Siemens are actively focusing on entering into contracts with utilities to provide smart power automation. For instance, in May 2018, Siemens signed a contract with BKW to install a cloud-based meter data management system for the analysis of power consumption data. Hence, a significant increase in contract & agreement propel the demand for distribution automation in the global market during the forecast period.

The Global Distribution Automation Market is segmented based on component and utility type. By component, the global market includes field devices, software & services, and communication technology. The field device segment is expected to hold the largest share as these field devices are uniformly distributed within the distribution network to ensure timely data transmission and system integrity. By utility type, the global market is divided into private and public. The public segment is expected to grow with the highest CAGR during the forecast period as these utilities are government-owned and are offered grants by the government.

The Global Distribution Automation Market is expected to grow at 7.31% CAGR during the forecast period. 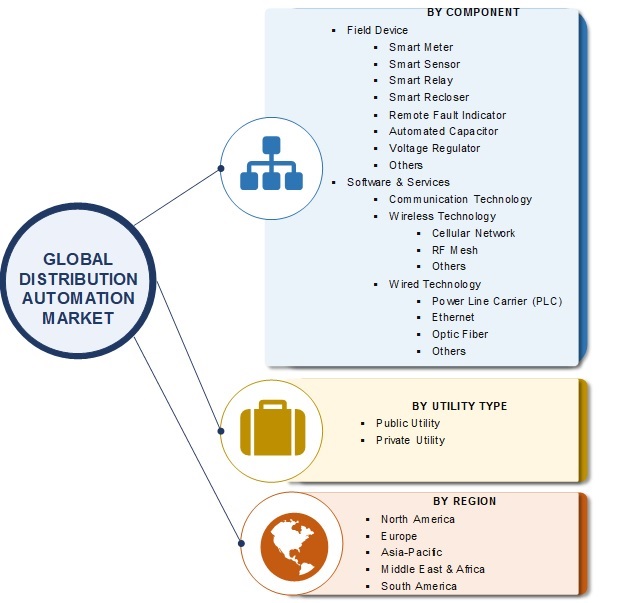 The Global Distribution Automation Market is expected to witness high growth during the forecast period owing to the need to upgrade the aging distribution infrastructure and increasing renewable power generation.

What is expected to be the CAGR of the distribution automation market?

The distribution automation market is supposed to strike 7.31% CAGR.

What is ascertained to be the valuation of the distribution automation market by 2025?

The value of the distribution automation market is supposed to reach USD 19.42 Bn.

Who are the key players operating in the distribution automation market?

What are the segments of the distribution automation market covered on the basis of component?

The segments of the distribution automation market based on component are software & services, field device, and communication technology.

By utility type, what are the segments of the distribution automation market?

By utility type, the segments are wired technology and wireless technology.