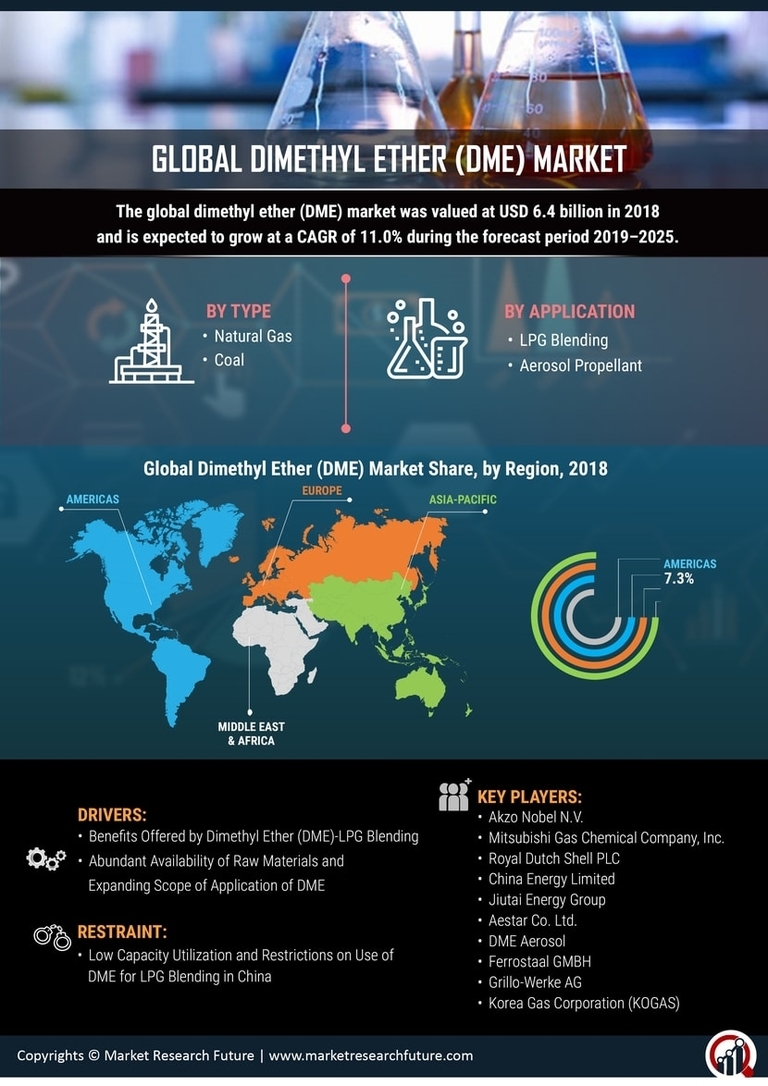 Dimethyl Ether Market is projected to be worth USD 29 Billion by 2030, registering a CAGR of 18.35% during the forecast period (2021 - 2030), The market was valued at USD 8 billion in 2021.Dimethyl ether is known as DME has another name that is methoxy methane. This is an odorless and colorless gas. The boiling point for the gas is low and the gas is generated from a series of raw materials like coal, biomass, methanol, and natural gas.A technology that enables a diesel-powered automotive vehicle to operate in flex-fuel mode, that is, either 100% diesel or Dimethyl Ether (DME) plus Diesel mode, has been developed by researchers from the Department of Engineering and Energy Science (DESE) at the  Indian Oil Corporation (IOC R&D), Indian Institute of Technology (IIT) Delhi, and Ashok Leyland Ltd. The Department of Science and Technology (DST), Government of India, provided funding for the project. On a test basis, the researchers used this technology to transform a diesel-powered automobile into a flex-fuel vehicle. IIT Delhi developed the flex fuel engine technology to be used with DME, while IOC R&D carried out the endurance and field trials testing and created the dedicated engine oil with the assistance of Ashok Leyland.

The global emergence of the novel coronavirus pandemic has had its effect on the growth potential of the dimethyl ether market share for the forecast period of 2021-2030 that followed the pandemic year of 2020. Since the rate of pandemic and infection spread was high, there was a dire need for the market to impose strict regulations and implications that would limit social gatherings and hence, bring down the positivity rate of the virus.

However, to help increase the dimethyl ether market revenue during the ongoing forecast period of 2021-2030, the government authorities and global players of the market have been increasing their investment for the development of various products and services that will help in portfolio enhancement and enhancing the chances of both the regional and international market to grow at an excellent rate while conducting the global market operations by the end of the forecast period in 2030.

List of Key Players in the Dimethyl Ether Market

The most prominent major key players in the dimethyl ether market all across the globe are mentioned below:

These major key players adopt various strategies to endure their market position in the dimethyl ether market in the global market by going for mergers, and acquisitions, by collaborating, setting up a new joint venture, establishing a partnership, developing a new product line, innovation in the existing product, developing a unique production process, and many others to expand their customer base in the untapped market of the dimethyl ether market all across the globe.

The global growth for the dimethyl ether market size is a result of various factors acting as drivers for the market during the forecast period that will be ending in 2030. There are multiple sources to carry out production that suit the needs of users that belong to a huge variety of applications, segments, and industries.A propane and renewable DME blend will be available commercially, according to Oberon Fuels (dimethyl ether). This mixture allows for a 60% reduction in carbon dioxide emissions for the widely utilized propane fuel used in cars, forklifts, farm machinery, backyard grills, and outdoor heaters by substituting some of the fossil fuel with renewable fuel. The third-largest propane provider in the U.S. and an Oberon partner, Suburban Propane Partners, L.P., is the first business to offer its customers in Southern California access to this more environmentally friendly blended fuel. Since rDME and propane have similar chemical structures, they can be blended, carried in the same trucks, and used for related purposes while significantly lowering greenhouse gas (GHG) emissions. As part of the government's goal to use 100 million tonnes of coal annually for gasification by 2030, four state-owned companies in India intend to construct coal-to-chemical projects.

But, one major factor that might restrain the market from increasing its revenue during the forecast period of 2022-2030 is the high cost associated with production followed by a constant source to spread fruitful and qualitative awareness amongst the target audience regarding the functions and market services.

The global market is witnessing an increase in the number of opportunities that will help in the global market growth. The report talks about the creation of various market opportunities that is a result of the splendid performance undertaken by the transportation and power segment that has a major role to play in minimizing the risks related to environmental pollution. Also, there is an inadequacy that prevails amongst the production units of various countries and the market is investing in the development sectors to match the same. This is an undeniable fact that it has positive attributes in store for the market.

The dimethyl ether market has been divided all across the globe based on the raw materials, applications, and region.

Based on the Raw Materials

The market has been divided all across the globe based on the raw materials into natural gas and coal. The largest market share in the global market is held by the natural gas dividend as this is the primary factor.

Based on the Applications

The market has been divided all across the globe based on the applications into aerosol, LPG blending, and propellants, and various others. The largest market share in the global market is held by the LPG blending dividend as the use of this type of dividend produces less amount of harmful emissions. However, the usage of propellants is also expected to grow during the review period as it is cost-effective.

The market has been divided worldwide based on the region into the North American region, Asia-Pacific region, European region, Latin American region, and the Middle East and African region.Dimethyl ether (DME) will now cost 30% more, according to Nouryon, a pioneer in specialty chemicals worldwide. This price increase is being made to account for general inflation in raw material, energy, freight, and labor costs. The increase applies to all areas and applications the business provides as of May 1, 2022.

The second-largest market share in the global market is held by the European region owing to the presence of a well-established technologically advanced infrastructure that requires more power generation and hence creates more growth opportunities in this region. Moreover, increasing investment coupled with increased expenditure in the automobile sector drives the market demand in this region.

Being the fastest-emerging region, the third-largest market share in the global market is held by the Asia-Pacific region owing to the presence of countries like South Korea, Japan, China, and India which are regarded as the main junction of the automobile industry and hence drives the market demand in this region. Moreover, increasing urbanization is another factor that creates more market demand.

The Latin American region and the Middle East and African region show the least market share due to the presence of low infrastructure in both these regions. Low per capita income is another contributing factor that restricts the market growth in these regions.As part of the strategy, Indian Oil Corp. (IOC), Coal India Ltd. (CIL), Gas Authority of India Ltd. (GAIL), and Bharat Heavy Electricals Ltd. (BHEL) would work together to create the projects and establish the surface coal gasification projects. According to the statement, the projects will "convert coal into syngas for downstream manufacturing of value-added chemicals produced by imported crude oil." According to the ministry, the corporations intend to use these projects to manufacture synthetic natural gas, ammonium nitrate, and dimethyl ether (DME). The most recent statement omitted information on the proposed projects' precise location, price, and capacity.

June 2021-SHV Energy, a reputed distributor of LNG and LPG, along with UGI International, in a joint venture, will be accelerating the production as well as utilization of renewable dimethyl ether (rDME), which is a sustainable low-carbon liquid gas. The companies are expecting development of at least six manufacturing units over a period of five years, with the target to be a total of 300 kilotons/year production capacity of rDME by the year 2027. June 2021-Oberon Fuels, manufacturer of clean-burning dimethyl ether transportation fuel, has started with the development of the first-ever renewable DME in the United States, which is the world’s only commercially produced dimethyl ether. Since rDME enables cost-effective storage and transportation of renewable hydrogen, this should be a major milestone for Oberon to bring down the emissions during transportation, while accelerating the creation of a hydrogen economy. Oberon is using waste methanol to turn it into rDME at its production unit in Brawley, Calif. This will be the first-time waste methanol will be utilized to produce rDME at a commercial level.Zagros Petrochemical Company (Iran) is spending a considerable sum of money on research and development to get an upper edge over its competitors. This will help the company on enhancing its sales revenue.

The most prominent major key players are highly investing in mergers and acquisitions, joint ventures, and new products.

The largest market share in the global market is held by the North American region owing to the presence of countries like the US, Canada, and Mexico that has a huge automobile sector and hence drives the market demand in this region.

Being the fastest-emerging region, the third-largest market share in the global market is held by the Asia-Pacific region owing to the presence of countries like South Korea, Japan, China, and India which are regarded as the main junction of the automobile industry and hence drives the market demand in this region.

What is the forecasted growth rate in the global market during the review period?

The dimethyl ether market is anticipated to grow at a higher CAGR of 18.35% in the global market during the forecasted period.

Who are the most prominent major vital players?

Which region held the largest market share during the review period?

What is the dimethyl ether market size?

Dimethyl Ether: Rising Demand from Crude Oil as well as LPG Consumption will boost the growth of ...