Coal bed methane market is expected to grow at ~4.05% CAGR during the forecast period.

Coal Bed Methane is an unconventional form of natural gas that is found in coal seams. It is primarily extracted from bituminous and sub-bituminous coals. Coal bed methane can be efficiently used as a fertilizer with methane being a source of ammonia used in half of the world’s fertilizer market. Favorable government initiatives towards use of unconventional resources will propel the coal bed methane market during the forecast timeline. Government of China, on recognizing the value of CBM, inducted the development in the Five-Year Plan which requires the country to produce 50 billion m3 of coal bed methane by 2020. Moreover, Government of India allotted 31 development blocks for the exploration and production of coal bed methane thereby propelling the industry.

Increasing potential for greenhouse gas mitigation is a major driver for the growth of the global coal bed methane market. For instance, China is taking steps to reduce carbon dioxide emissions.  The Government of China has set reduction targets for two of its largest sources of non-CO2, namely, coal bed methane and HFC emissions. According to China’s national climate action plan, China would increase its coal bed methane production by 2020.

The global coal bed methane market is projected to grow at a high rate during the forecast period, mainly due to the increasing adoption of coal bed methane as an alternative to electricity will lower the burden on the national power grids of developing countries. Market growth in this region can be attributed to countries such as China, Australia, and India are the key markets for cola bed methane in Asia Pacific. However, growing demand for sustainable fuel in the US and increased focus on reducing the reliance on conventional sources of natural gas would driver the coal bed methane market in the North America. 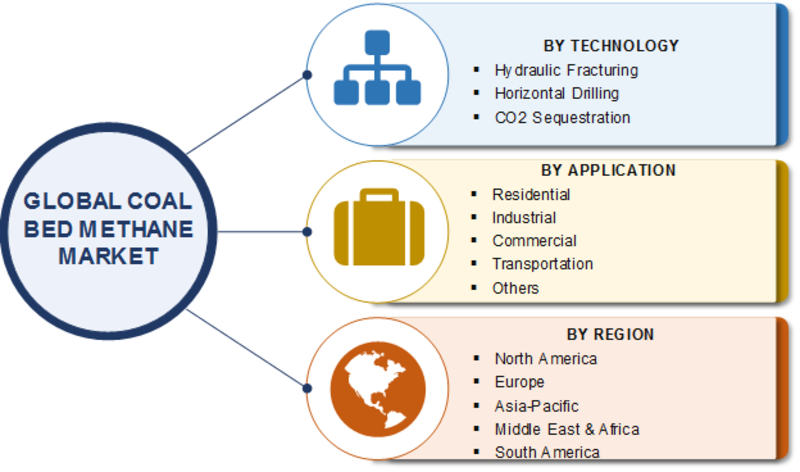 At what growth rate is the coal bed methane market evolving?

Who are the major market giants operating in the global coal bed methane market?

A few significant players of the global coal bed methane market are Far East Energy Corporation (US), Santos (Australia), and Nexen Inc. (Canada), among others.

Which technology segment of the coal bed methane market is observing the fastest growth?

The hydraulic facturing segment is expected to drive market growth over the review period.

Which application segment of the coal bed methane market is expected to witness the highest demand?

The industrial segment is likely to witness the highest demand in the coal bed methane market.

Which is the leading region of the coal bed methane market?

The North American region is expected to witness exponential growth.