Please note that the assessment period of report has been updated from 2020-2026 to 2020-2027. Cordially fill Sample form for updated data.

Battery analyzer are used to measure the capacity, voltage, and resistance of batteries. The battery analyzer is designed for testing the batteries with high accuracy, resolution, and speed. It examines the batteries by fully charge it, the measures its capacity by discharging it, and further subsequently recharge the battery.

Many major players such as Fluke Corporation (US), Ametek, Inc. (US), Cadex Electronics Inc. (Canada), ACT Meters Ltd (UK), Kussmaul Electronics Co. Inc. (US), and HIOKI E.E. CORPORATION (Japan), among others are actively participating in the development of battery analyzer. For instance, in February 2021, HIOKI E.E. CORPORATION (Japan) launched the battery tester BT3554-50, that streamlines lead-acid battery diagnostics with audio measurement and recording guidance in datacenters, manufacturing plants, and buildings. In August 2018, B&K Precision Corporation (US) expanded its 600 series of battery analyzer with the introduction of new 603B model. In October 2017, Cadex Electronics Inc. (Canada) introduced the 4-wire RigidArm universal adapter, a spring-loaded arm that lock into position for repetitive testing of removable smartphone batteries as well as small rechargeable batteries. Such developments in the market are expected to drive the growth of the global battery analyzer market during the forecast period.

The global battery analyzer market is expected to grow at ~4% CAGR during the forecast period. 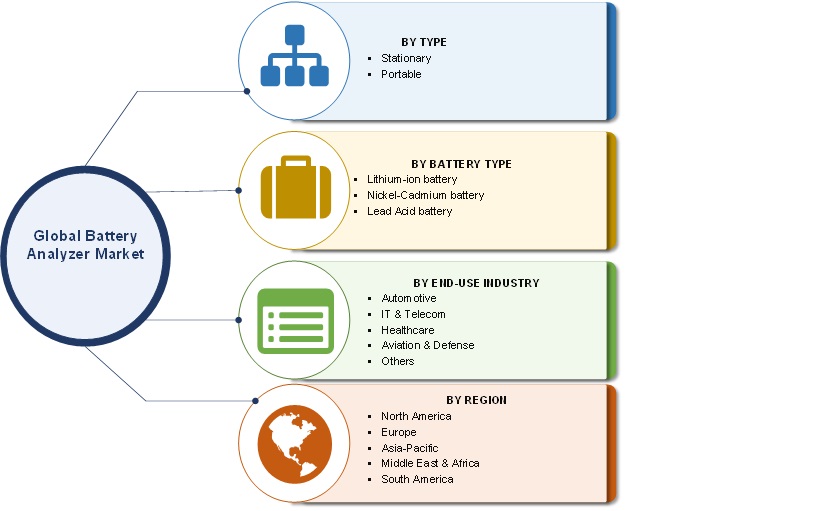 Based on region, the global battery analyzer market is segmented into Asia-Pacific, North America, Europe, the Middle East & Africa, and South America. Asia-Pacific holds the largest battery analyzer market share due to the growing demand for consumer electronic devices and increasing investments in automotive and telecom industry in the region. The developments in the automotive, IT & telecom, and data centers in the countries such as China, Japan, and India are the major factors which surges the demand for data centers in the Asia-Pacific region. Additionally, the efforts taken by the government bodies and companies for reducing vehicle emissions is creating opportunities for key players to expand their EV business in Asia-Pacific. China contributes a major share in the sales of electric vehicles in the global market as around 1.06 million electric cars were sold in 2019. In India, the Government of India has set targets to accelerate the adoption of EVs with an aim to run all three-wheelers on batteries by 2023 and most two-wheelers by 2025. Initiatives are also being made to make carmakers develop new EV models and manufacture components such as lithium-ion batteries. Moreover, in Japan, Gogoro Inc., a Taiwan-based electric two-wheeler manufacturer, expanded its business in Japan to offer electric two-wheelers. Furthermore, in India, in February 2021, Adani group (India) and EdgeConneX (US) announced to establish a joint venture to develop a network of data centres in India. Such developments are expected to increase the demand for battery analyzer in the automotive and IT & telecom sector in the Asia-Pacific region.