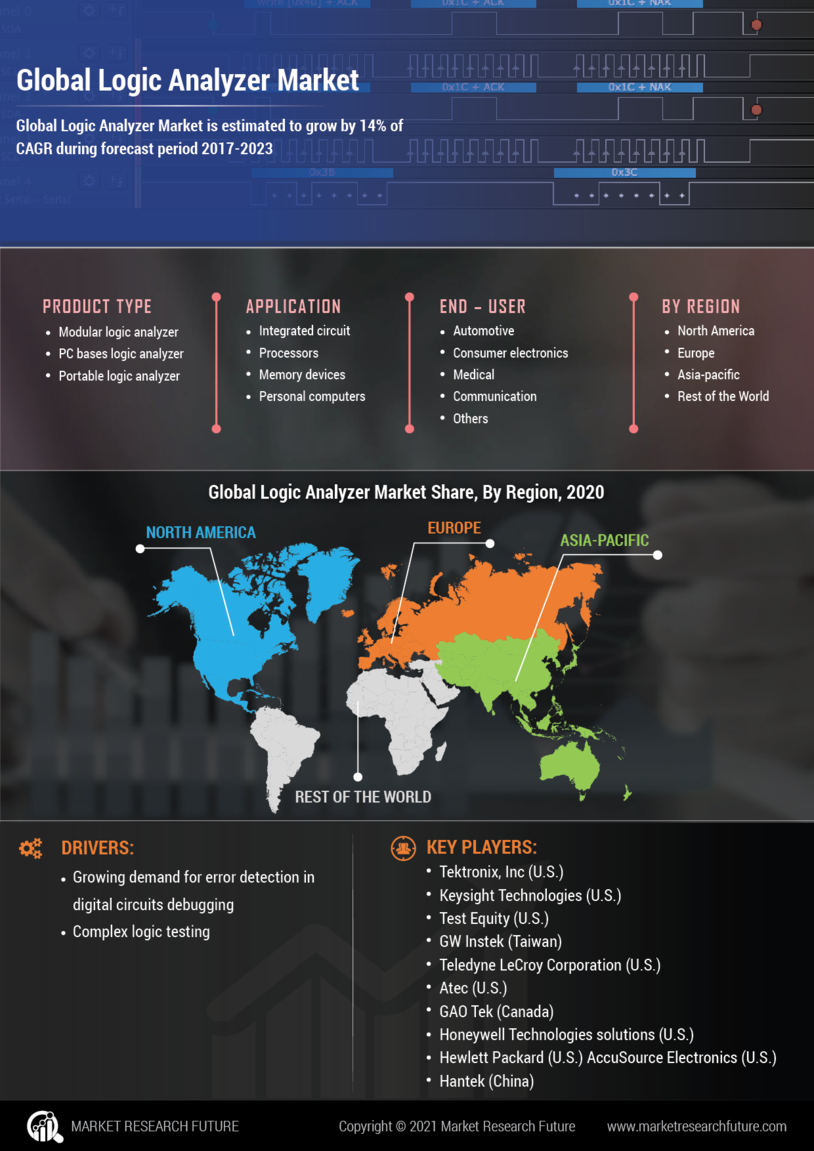 The logic analyzer market is growing at a CAGR of 14% in between the period 2017 to 2023. There are several growth factors in the global market right now that are working as a stimulus for logical analyzers. Advancements in IT, computer sciences, and technology are showing the path to several businesses along with their progression. Since logic analyzers are an inseparably important part of multiple technical disciplines, a lot of market factors have an impact on their market position.

The logic analyzer is an instrument that can covert multiple digital signals into readable signs for testing and evaluation. The major function of the device is to detect hardware abnormalities and dysfunctions. Especially, logic analyzers are used for analyzing the defects inside machinery that are causing timing errors and much more. Engineers use these instruments to test prototypes, optimize a digital device, and debug hardware in laboratories. The logic analyzer industry is making highs on the shoulders of IT, computer, automotive, telecom, communication industries.

There is probably no market left that does not have any impact of COVID-19 on it. Since the pandemic has hit the countries of the world, many industries have faced grave downfalls while some industries made double and triple profits due to pandemics. In the case of technological hubs, the impacts are mostly positive. There were multiple lockdowns in several countries, which made companies operate their work from remote or home locations.

This format has pushed a lot of investments towards cloud-based and internet-run communication systems. The global logic analyzer market depends on the functioning of the technical and IT industries. Also, at the time of the devastated economy of the major countries in the world, investments become slower too.


According to present estimations, there are more than 50 billion devices in the world that are connected to the internet. The key drivers for the market of logic analyzers are the growth proportions in the automotive, electronics, healthcare, etc industries. Logical analyzers can be used in personal computers, memory devices, and more importantly in integrated circuits (IC). The use of the instrument in semiconductors is a popular and vast market driver for logic analyzers.

The pocket logic analyzer has a vast use in the telecom and automotive industries. Engineers depend on the device to evaluate complex and multiple streams of digital signals and diagnose the errors with the help of that. The medical monitoring industry has been another consistent driver for the concerned market. The monitoring instruments create demand for logic analyzers.


The invention and innovation of Artificial Intelligence (AI), the internet of things (IoT), Augmented Reality (AR), Automation, etc are making great opportunities for the industrial logic analyzer market. More internet devices in the market mean more expansion proposition for the logic analyzers. Since the instrument is a measuring and detecting tool for complex digital signals, it has a huge opportunity in the upcoming advancements in 5G technology. There are millions of LTE, 3G, and 4G users in the world.

Right now, the 5G network has started its journey in multiple countries. In the installation process of 5G tower sells and optic fibers, a logic analyzer signaling test is going to be a necessary part.


One of the primary restraints in the way of digital logic analyzer market growth is the imposition of the COVID-19 pandemic right now. The lockdowns in several countries have weakened the economy in several countries. The per capita expenditure has dramatically reduced in major countries and states. In such a situation, the investment in the logic analyzer is slower because the primary industries are suffering too. So, the market is facing a barrier to expanding.

Also, there is a lack of skilled workers in the field who can execute proper usage of the new technologies. Unless the number of trained technical staff increases who can effectively use devices such as USB logic analyzer, and more.


The advancement of 5G technology is supposed to bring a massive demand for testing equipment like logic analyzers. But the challenging portion is the cost of new developments. The telecom spectrum is a highly expensive part of the overall technology. The 5G spectrum is very costly so far, so only high-income countries can afford it. Testing equipment is only useful after the installation process begins in the telecom market.

Also, there is a lot of conflict regarding innovation in the telecom industry. There complicated government rules and regulations regarding the use of 5G as well. So, that way the logic analyzer market growth can face challenges.


On the cumulative growth front, the performance of the logic analyzers is impeccable. For the last several years, the market growth has been tremendous and steady. The global market is growing at a CAGR of 14% for the forecast period of 2017 to 2023. By the end of 2023, the market will reach USD 3.45 billion according to all estimations. The logic analyzer market forecast suggests there will be a significant rise in the telecom and healthcare industries in the coming future, which will generate positive figures for the concerned market also

Segments based on product type:

Segments based on channel count:


Segments based on end-user markets:

Segments based on target audiences:

Segments based on regions:

The Asia Pacific (APAC) region is going to be the fastest-growing market for logic analyzers in the world. Although as of now, the dominant figure is the North American region. The North American countries like the US, Canada, etc are the top countries in the world to adopt advanced technologies from the beginning. The European powerhouse countries like Germany, France, UK are investing vastly in the market as well.

But latest logic analyzer market trends suggest the Asia pacific countries like India, China are taking innovative steps towards expanding the market for logic analyzers. So, the APAC region is going to be the fastest-growing market for the instrument.

There is significant competition between big giant corporations in the world. But the market has noticeable impacts on local regional players of different countries also. The market of a logic analyzer is dynamic and is going through contrast changes all the time. The advancements in the primary industries force logic analyzer products to upgrade with time. Major corporations are trying to cover multi-national operations in developing countries for the market size factor.

Top key players in the market are:

Advantest Corporation has announced the acquisition of the Semiconductor System Level Test business in 2019. The huge acquisition has cost them USD 135 million. This takeover made Advantest Corp. innovate better logic analyzer software and got them a better grip on the market.

Logic analyzer USB or pc-based devices, modular logical analyzer, memory devices, etc have different applications than each other. This report overlooks the entire segmentation of the logic analyzer market. The upcoming growth proportion is phenomenal for the market.

What is the major driver of the global logic analyzer market?

The demand for error detection in digital circuits and testing of complex circuits can drive the global logic analyzer market.

Which product can lead in the global logic analyzer market?

The modular logic analyzer can lead in the global market till 2023 due to its functionality and large number of channel counts.

What is the projected valuation of the global logic analyzer market?

What is the growth rate of the global logic analyzer market?

Which region can lead in the global logic analyzer market?

North America can lead in the global logic analyzer market owing to demand for storage devices, large number of PC analyzers, and presence of various manufacturers in the region.

Who are the prominent players of the logic analyzer market?