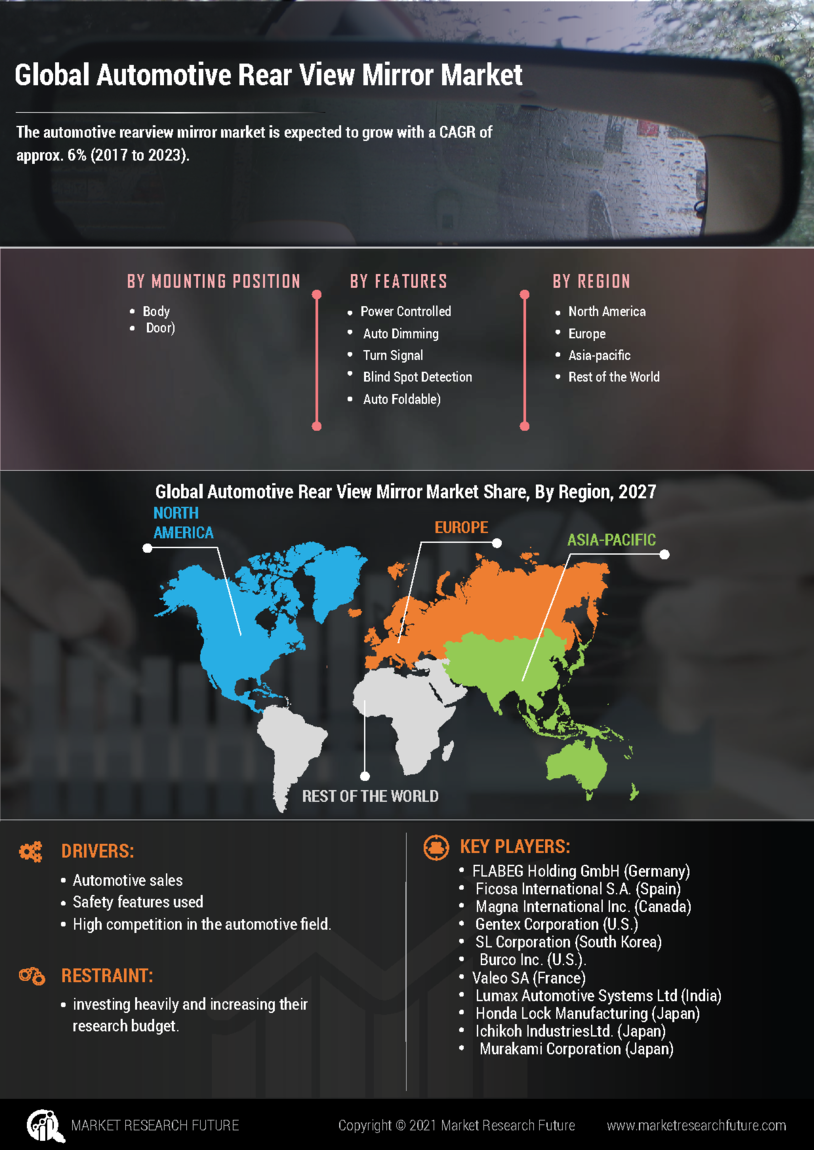 The automotive industry of today’s times is much more concerned with the development of safety and security aspects of the automobile compared to the earlier times. The safety measures and their technologies have been needed to revisit and reinvent in terms of the approach due to the sheer growth in the sales of automobiles. A critical aspect of the safety features is the development of the mirror technology. The mirrors of earlier times were just utilized for gauging the distance and vehicle approaching the automobile. But with time, aspects like the onslaught of vehicle headlight beam, the development of smart mirror to visualize the smaller obstacles going unnoticed near the vehicle (especially in case of SUVs and big trucks). This is where the automotive rearview mirror technology comes into picture. The rearview mirror technology basically covers crucial aspects like collection of data from the rearview camera and projecting it onto the rearview mirror screen, switching of the rearview mirror between a conventional mirror and digital screen.

There are many factors responsible for the growth of the automotive rearview mirror market globally. Firstly, the global automotive sales have seen a steady increase due to the increase in the purchase power of people the world over. Secondly, the safety features used in the automobiles have seen a drastic shift due to increased vehicle movement. Thirdly, the automobile manufacturers have to deal with the tremendous competition in the automotive field and thus to differentiate their product offering, they offer state of the art technological features at competitive prices to stay ahead of the curve.

On the basis of the mounting position, the door mounted variety is more commonly used. This is primarily due to the ease and freedom it provides in syndicating the electrical and electronic system. This helps in easy mirror part replacement and repair if need be. On the basis of the location, both the varieties – interior rearview mirror and the exterior rearview mirror are used. The interior mirror offers more options for customization like toggling between a normal mirror and transforming into the digital screen. This helps in better maneuverability and vehicle control. On the basis of the technology, the smart rear view mirror is costly and offers more plethora of options in terms of the functionality. The conventional rear view mirror, on the other hand, is a more cost-effective option and can be fitted even in budget vehicles. On the basis of the features, the most commonly used features are the signal indicator, auto folding option and power controlled variety. The more expensive features like the auto dimming mirror and blind spot detection offer better vehicle control and reduction in mishaps.

On the basis of region, the market is segmented into North America, Asia Pacific, Europe, and Rest of the World. The North America market (especially U.S. and Canada), is one of the largest automotive market in the world. The number of SUVs and mini trucks plying on the roads makes this market potentially strong for the growth of the rearview mirror. The Asia Pacific region is called the future automotive hub of the world owing to the rising middle class and increasing purchase power. Thus this region as well shows huge potential for the rearview mirror system. The Europe region and the people that reside here, are known for their penchant for high-end cars, whose safety features would further enhance using the rearview mirror system.

The report for Global Automotive Rear View Mirror Market of Market Research Future comprises of extensive primary research along with the detailed analysis of qualitative as well as quantitative aspects by various industry experts, key opinion leaders to gain the deeper insight of the market and industry performance. The report gives the clear picture of current market scenario which includes historical and projected market size in terms of value and volume, technological advancement, macro economical and governing factors in the market. The report provides details information and strategies of the top key players in the industry. The report also gives a broad study of the different market segments and regions.

What is the major factor leading the market?

The safety features in the automobiles have seen a drastic shift due to increased vehicle movement that has led to the increase in leading the market.

What is the latest CAGR recorded for the market?

The market has in the latest recorded CAGR of approx. 7.14%.

What are the regions grossing with top market revenues in the future?

North America, Asia Pacific, Europe are the regions grossing with top market revenues in the future.

Who are the top 4 key players investing in the market share?