Anti-counterfeit packaging is majorly adopted by the manufacturers to avoid economic damage to the product as well as the company and consumer health risks. Counterfeit pharmaceutical is worth USD 200 billion annual business, making it one of the largest segments of the USD 1.7 trillion fraudulent goods sold worldwide each year. This revenue loss is mainly due to counterfeiting deeds for non-prescribed drugs. Thus, implementation of innovative technologies for product tracking would diminish the economic damage and further propel the utilization of anti-counterfeit packaging. Additionally, anti-counterfeit technologies are majorly supported by the favorable government policies in the food & beverages and pharmaceutical packaging sector, which further boosts the anti-counterfeit market.

Counterfeiting practices are more common in the underdeveloped and developing nations as compared to developed nations. Though, lack of awareness about validating food products and pharmaceutical goods among the customers is highly disturbing the market expansion in many underdeveloped regions across the globe. Anti-counterfeit packaging market is currently facing a humongous challenge due to the globalization of the retail sectors, which indirectly gives a vital advantage to the counterfeiters to disrupt the genuine goods market. The global food & beverages market along with pharmaceutical and retail products market are suffering loss due to counterfeiting in terms of revenue and intangible assets. Any primary or vital change in the brand recall packaging process can generate a barrier to recognize the genuine product, and it can certainly help the forgers to manufacture fake products in the name of original one.

Global anti-counterfeit packaging market has been segmented based on technology, usage feature, end-users, and region. Based on the technology, the market is segmented into barcode, labels, RFID, holograms, and others. Among these, the RFID is projected to dominate the anti-counterfeit packaging market through 2023. The dominant position of this segment can be attributed to its ability to capture and read information stored on the tag attached to the product. Based on the usage feature, the market is segmented into track & trace, tamper evidence, overt, covert, and forensic markers. Track & trace dominated the market in 2016 and is projected to be the fastest-growing usage feature over the forecast period. The growth is due to its application in almost all types of packaging variables. Track & trace technology is also a widely used feature as they display product statistics, brand documentation symbols, and transportation information during the transport. Based on the end-users, the market is segmented into healthcare, food & beverages, consumer goods, apparel, automotive, and others. Healthcare dominated the market in 2016 and is projected to be the fastest-growing end-user over the next five years owing to prevention of counterfeiting medicines and healthcare products.

Anti-counterfeit packaging is a dynamic market with huge competition among the major competitors. The current market situation of the global anti-counterfeit packaging market is firm with the presence of price conflicts among the local and international players. Since the local players find it problematic to contest with universal vendors in terms of features, quality, and range of offerings, they have raised the bar of rivalry by offering ground-breaking solutions at a price lesser than international players.

Global Anti-Counterfeit packaging market is expected to grow at a CAGR of about 12% during the forecast period. 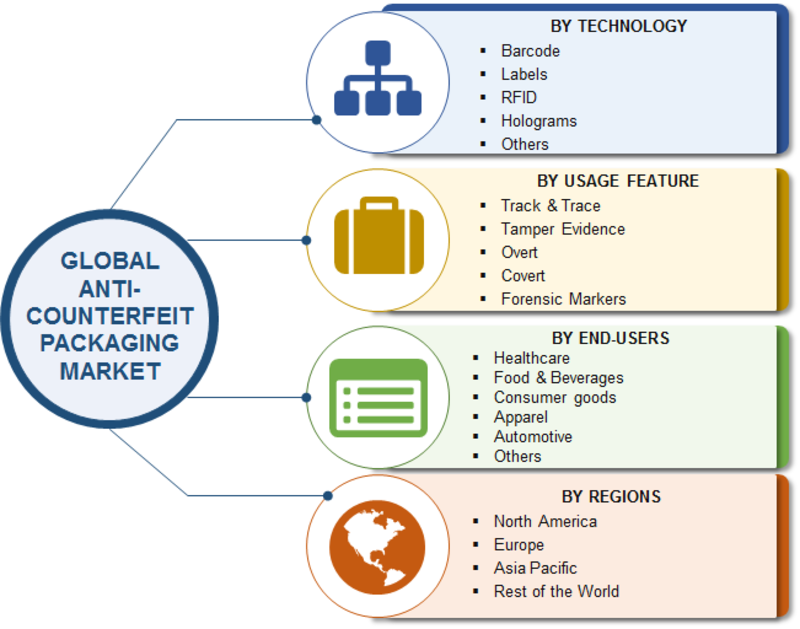 What are the major technologies used in the anti-counterfeit packaging market?

Major technologies used in the anti-counterfeit packaging market include barcodes, labels, RFID, holograms, and others.

What is the CAGR of the anti-counterfeit packaging market?

Global anti-counterfeit packaging market is expected to exhibit a strong 12% CAGR over the forecast period till 2023.

What is the major driver for the anti-counterfeit packaging market?

The growing prevalence of counterfeiting practices, especially in emerging regions, is the major driver for the anti-counterfeit packaging market.

What is the leading regional anti-counterfeit packaging market?

What are the key players in the anti-counterfeit packaging market?

Leading players in the global anti-counterfeit packaging market include Avery Dennison Corporation, DuPont de Nemours, and CCL Industries, among others.