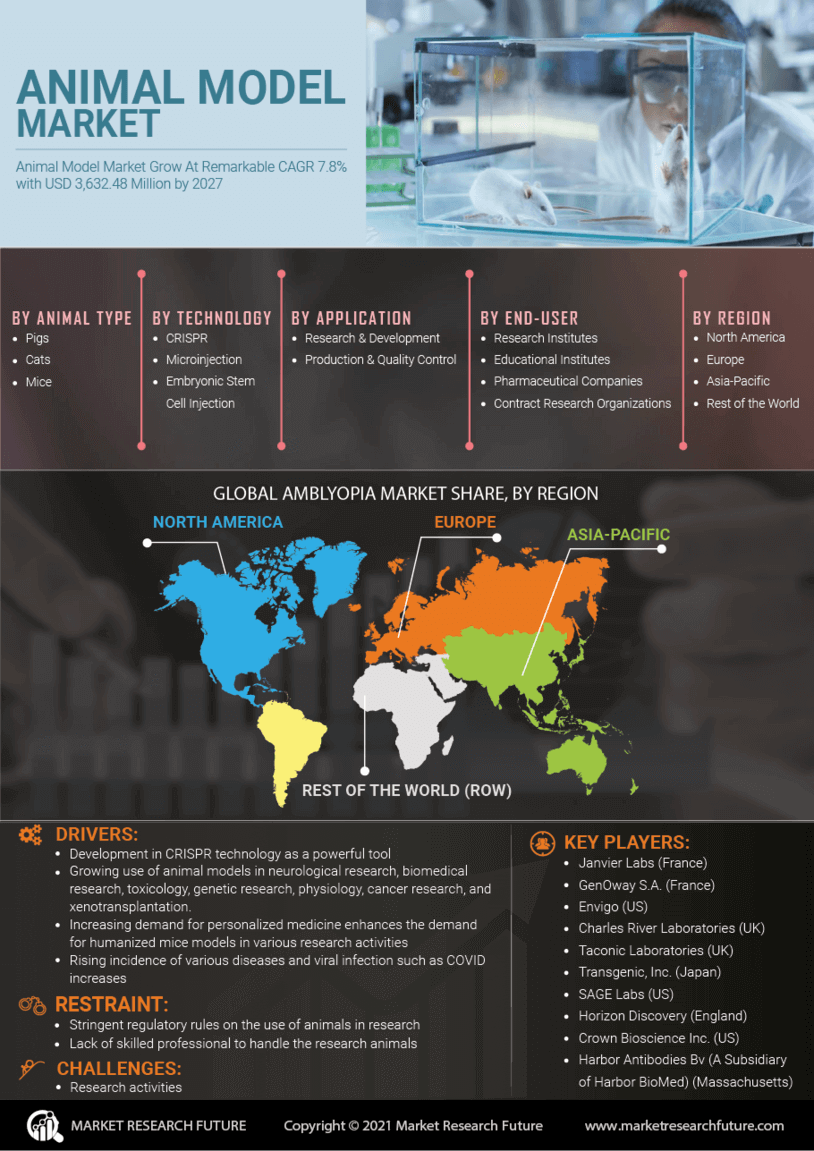 One of the major issues that the animal model market functioning is facing during the ongoing forecast period is covering up the losses and leaving the impact of the coronavirus behind. Since the pandemic has hit global boundaries, even the developed nations that have sturdy healthcare facilities and infrastructure are suffering and struggling. The production and manufacturing units of the animal model market have been struggling to meet the vibrant demands but due to the pandemic only, the animal model market has been suffering in terms of the disrupted supply chain mechanism. Also, the lockdown imposed by the global governments during the forecast period of 2020-2027 has been creating a halt in the services and production sector as there is an unavailability of skilled labor and professionals that will help in meeting the expected quality standards of the animal model market.

During the ongoing forecast period, the global governments have been increasing their support in terms of rolling schemes and regulations followed by investing in global research and development initiatives. Also, collaborations, acquisitions, mergers, and joint ventures are going to help the competitive market players have a great role in the development of the regional and the international market. The market players are likely to develop and launch new products that will help in benefiting the global target audience.

There has been a huge rise in the research and development fields that is one of the major reasons for the growth of the animal model market during the forecast period. The industry experts predict that there will be a huge demand in the requirement for an animal model that helps perform a series of duties related to disease testing and human physiology that will act as major market drivers for the forecast period that will be ending in 2027.

However, where there are growth opportunities, there will be restraints and challenges, as well. One of the major issues that will restrain the animal model market from growing as per the predicted figures is that the associated cost of study with the market is quite high and there is a stringent regulatory framework that bars the market players to conduct their undertaken and planned operations in a certain and decided way.

There has been a major highlight of the elaborated use of an animal model that is known for its help in areas like validation and target identification. Further, it has a recognized use in areas like safety screening and toxicity, along with drug screening, lead optimization, and preclinical analyses of drug efficacy and safety. The advent of technology along with these factors is likely to promise the market excellent opportunities for growth based on the trends during the forecast period that ends in 2027. Also, there has been a substantial rise in the increase of disorders that are genetics based in various locations across the globe especially during the forecast period that will be ending in 2027.

The animal type segment of the animal model market includes pets like monkeys, cats, pigs, and mice, amongst others.

The animal model market deals in a series of applications like academics, research, and development, production, and quality control, like the others.

By the geographical regions:

The rising demand for the market services and products in various global regions is resulting in the development of the market in 4 major regions. The regions are North America, the APAC region, Europe, and the rest of the world (RoW).

Based on the distribution of resources and developing needs of a varied target audience, the animal model market analysis predicts that the global growth is likely to be dominated by the North American region. One of the major reasons that are resulting in this massive growth is the rise in favorable policies that have been introduced by the US and Canadian government is helping in raising various funding plans in the research and development activities. Also, there has been a great rise in the number of investments pouring in, and hence, the animal model market is likely to grow at the maximum rate in this region.

The rising degree of competition is a result of the increasing research and development followed by investment from various market players. Also, the report aims to draw a competitive comparison amongst the players based on the recent developments undertaken. Theanimal model market players are as follows:

The growth of the animal cell market size is discussed on the market and hence, the report has been curated for an in-depth discussion. The report helps in understanding the global animal model market functioning and hence, discusses the following factors:

What is the projected worth of the Global Animal Model Market?

Animal Model Market is projected to hold a substantial value of USD 3,632.48 million by the end of 2027.

What is the expected CAGR of the Global Animal Model Market?

What is the most significant factor in the Global Animal Model Market?

The growing research activity and increasing innovation of mice model for cancer, rare diseases, immune disease, and other R&D activities are likely to propel the global animal model market.

What are the factors impeding the Global Animal Model Market?

The global animal model market is estimated to be impeded due to the lack of expertise and strict rules and regulations on the use of animals in research.

Who are the most eminent players of the Global Animal Model Market?

Animal Model Market is Expected to Showcase Rampant Growth Over 2027