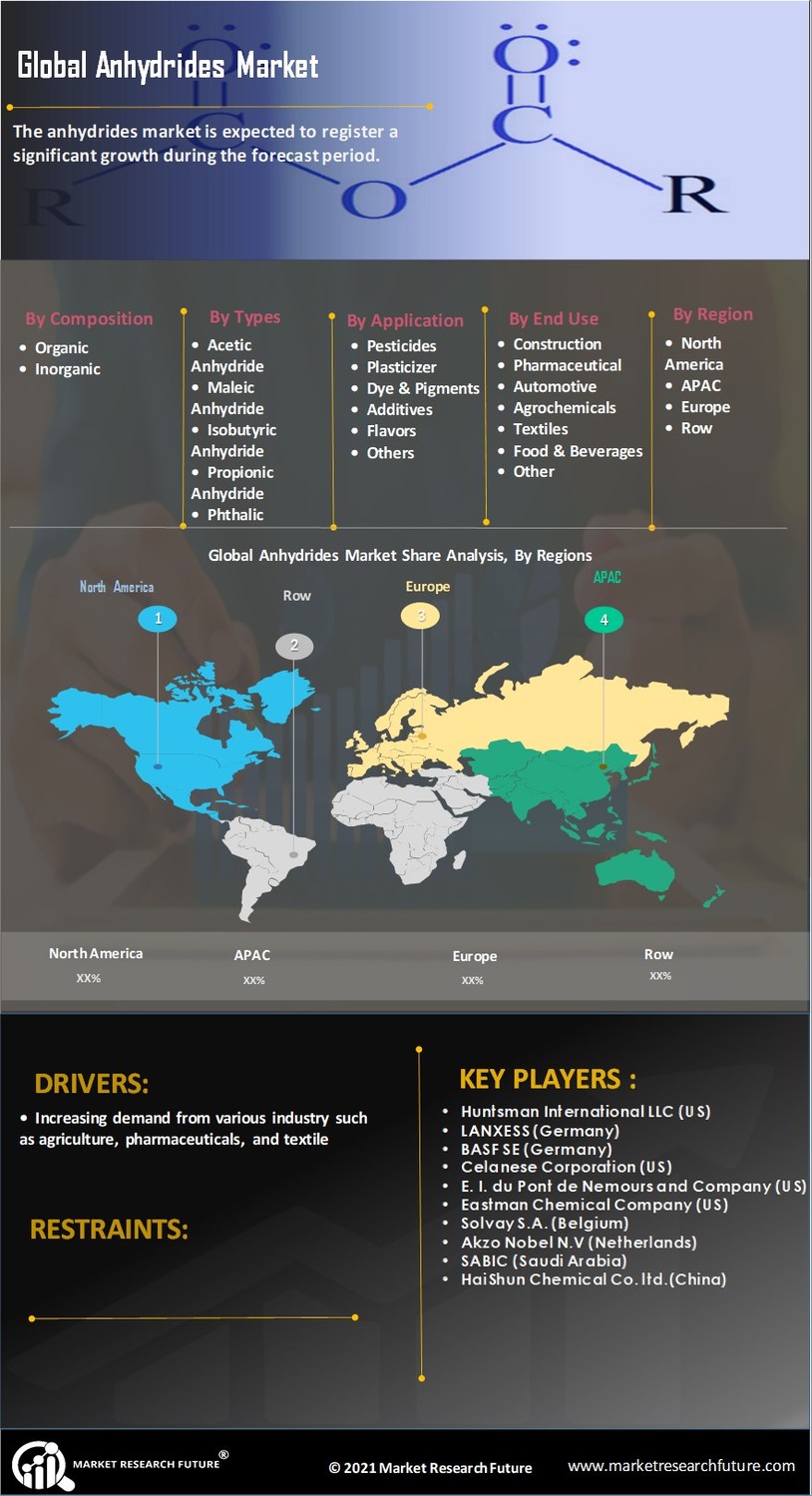 The Anhydrides Market forecast is expected to reach a CAGR of 2.50 % and a significant USD value during the forecast period.

Anhydride is an organic chemical compound formed by eliminating elements of the water from another organic compound. The anhydrides have huge applications in various industrial verticals such as pharmaceutical, chemicals, consumer goods and personal care industries. The rising demand for anhydride as a crucial element in the industrial verticals is chiefly driving the anhydrides market at the global level.

Anhydrides are part of chemical reactions performed from the formation of esters and resins. Esters have a pleasant fragrance; therefore, they are widely used in the manufacturing of personal care products like perfumes. Anhydrides are also applied in the manufacturing of synthetic resins. These resins are used to manufacture adhesives, surface coatings, synthetic textile fibers, etc. Due to these usages, the anhydrides market share is emerging in the forecast period.

Rising demand for anhydride from the APAC region in countries like China, India, and Japan is accelerating the market. Japan and China are considered as the major anhydride consumers. The rise in demand from various industries like agriculture, pharmaceuticals, and textile in India will offer great opportunities for lifting the anhydrides market trends in India.

The Anhydrides Market is also chiefly driven by the rising demand from the cigarette tow market. Acetic anhydride is also used in dyes, fragrances, flavors, and the textile industry. These industrial verticals are driving the anhydrides market size. Also, anhydrides are predominantly used as an element in artificial sweeteners, coatings, modified starches, pharmaceuticals, resins, polymers, and the pesticides market. Anhydrides can produce tetraacetylethylenediamine (TAED), further used as a bleach activator in the laundry detergents market. Moreover, acetic anhydride is used for manufacturing polytetramethylene ether glycol for spandex. These factors are highly propelling the market growth.

The anhydrides market forecast is expected to reach a CAGR of 2.50 % and a significant USD value during the forecast period.

During the pandemic period, the anhydrides market faced tough challenges when governments worldwide announced lockdown. The industries of the market closed their operational units, which halted its production process. This has shown a serious impact on the supply chain process. Anhydrides are the chief raw material for surface coatings. These coatings are highly utilized in various industries. But the lockdown when the industries stopped their process has shown a negative impact on the anhydrides market by decreasing its sales. The usage of the product declined, and the growth rate eventually dropped.

When the lockdown was lifted, the market started gaining demands which recovered its pandemic loss. The industrial verticals worldwide have increased their need for anhydrides which stabilized the market's growth. In the coming years, the market's demand requires consistency which will help it acquire the estimated value in the forecast period.

Chief Factors Existing In The Market


Key Market DriversThe growth drivers of the anhydrides market are responsible for boosting up its revenue. The growing advancements and development in organic chemistry are chiefly driving the market. Improvement in chemical testing with developed techniques and analysis at the research are major market growth drivers. Vendors of the market are expected to step into lucrative channels to promote their sales and position their products. Moreover, the significant shift from raw standards of chemical manufacturing to sophisticated processes allows the anhydrides market trends to flourish. These growth drivers will eventually propel the market's demand, driving its growth.Market ChallengesThe anhydrides market value is highly affected by the challenges. The major challenging factors are the decline in usage of anhydride in cellulose acetate in concern with domestic consumption. Due to environmental regulations, the demand for anhydride is decreasing. Market OpportunitiesThe anhydrides market is growing rapidly due to the rising growth opportunities. The technological improvements and untapped potential are set to offer promising opportunities for the market. The growing emphasis of nanotech anti-graffiti coatings in the industrial verticals will create lucrative opportunities for the industrial players, which will boost the market's demand globally.Market RestraintsThe market constraints are hindering the market's growth which is affecting its growth rate. The development of complex organic compounds is a complex process that needs pinpoint precision, acting as a barrier to the anhydrides market. Other factors such as lack of experts and knowledge on organic chemistry hamper the market's growth.

Cumulative Evaluation Of The Market

The Anhydrides Market Outlook evaluated report states that it will secure its growth and attain a strong compound annual growth rate in the evaluation period. The growth drivers and growth opportunities will specifically propel the growth. Despite the pandemic's mixed impact, the market will successfully reach the estimated value overcoming the growth limiting factors. The overall growth progress of the market ensures that the global anhydrides market growth will elevate with the presence of growth factors and by the players' efforts.

The market is segmented into important segments such as composition, type, application and end-user. The segments are further sub-segmented into major types. 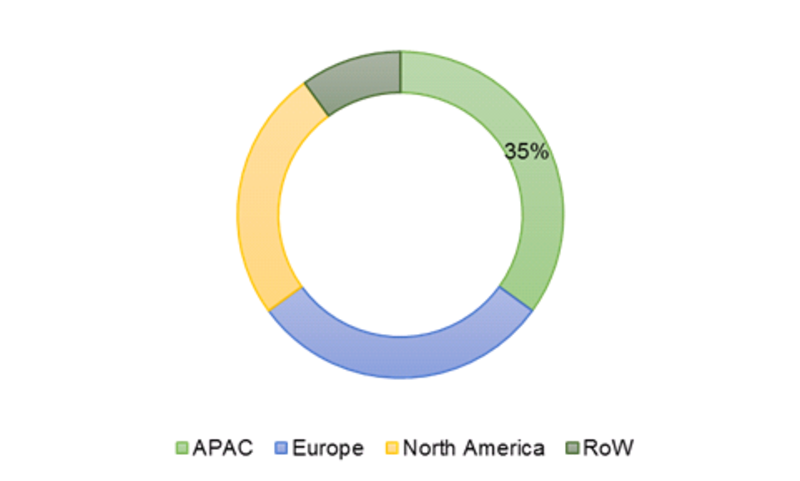 According to the geographical analysis, the anhydrides market covers major regions such as North America, Europe, Asia Pacific, Latin America and the Middle East and Africa.

Among the above prominent regions, the Asia Pacific is observed as the largest market due to the higher consumption in sectors like pharmaceuticals, agriculture and textile in the countries like China,India and Japan. The higher demand for the textile industry in these regions is driving the market.

The European market is accelerated by sectors such as agricultural, pharmaceutical, food & beverages, and other industries; therefore, it is considered the second-largest market. At the same time, North America is propelling due to the increased rate of consumption in the agriculture and pharmaceutical industries.

The other regions of the world, such as Latin America and the Middle East, will also notice significant growth because of the wide application of anhydrides in pesticides, plasticizers, dye & pigments, additives, flavors, and others.

Competitive Intensity Within The Industry

The key players play a vital role in boosting the anhydrides market at the global level. The acquisitions, mergers, collaboration, partnerships and product launch are the factors accelerating the market. The efforts of the players for future developments will help the market to emerge the performance. Their presence in major regions of the world propels the regional market, which will eventually lift up the global market. The major players of the anhydrides market are listed below.

In May 2021, The first phase of Ibn Sina Petrochemical Company in Mahshahr, Khuzestan Province, will be launched soon to complete the butane value chain. Using butane as feedstock, the plant will produce three essential products: maleic anhydride, isobutane, and normal butane.

In September 2020, AOC, a global resins and specialty materials supplier, revealed that it has successfully developed the maleic anhydride business and manufacturing facility in Neal, West Virginia, from Ashland Global Holdings.

The detailed study of the anhydrides market analysis states that it will proceed with a higher growth pace due to the presence of growth influencing factors like key drivers and opportunities. The limiting factors were also studied along with the pandemic's impact. The market segments were described with their sub-segments. The regional report states about the market's growth in different regions around the world. The industrial players' importance was stated, and their developments were briefly noticed. The overall report shows that the anhydrides market has shown a significant growth rate, and it is expected to maintain its consistency and obtain a massive CAGR value.

At what CAGR is the Anhydrides Market predicted to grow during the forecast period?

Anhydrides Market is predicted to grow at Substantial CAGR through forecast period of 2020-2030.

What is the forecast period of Anhydrides Market research report?

The forecast period for Anhydrides Market research report is 2020-2030.

Which region will lead the global Anhydrides Market?

What are the key factors driving the Anhydrides Market?

Increasing demand from various industry such as agriculture, pharmaceuticals, and textile

Who are the key players in the Anhydrides Market?