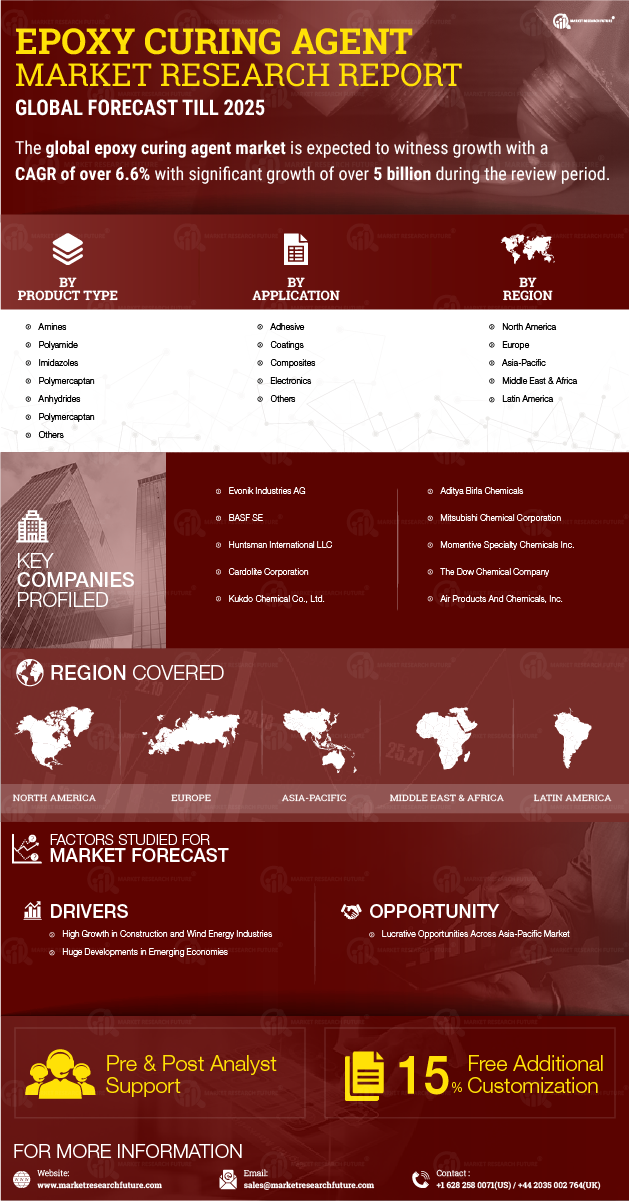 The Epoxy Curing Agent Market is expected to witness growth with a CAGR of over 6.6% with significant growth of over 5 billion during the review period.

The process of the linear epoxy resin with appropriate curatives to form three-dimensional cross-linked thermoset structures is known as epoxy curing. Epoxy curing agents provide an excellent bonding property even after curing. It offers excellent mechanical strength, electrical insulation, and high chemical resistance. Additionally, epoxy resins can provide various properties as they are combined and cured composed with different curing agents. Curing of epoxy resins is an exothermic reaction and, in some cases, produces enough heat to cause thermal degradation if not controlled. After curing, epoxy resin has excellent properties on mechanical strength, chemical resistance, and electrical insulation.

However, the availability of substitutes for epoxy curing agents, environmental regulations, and cost of the production process serve as a major restraining factor in the growth of Epoxy Curing Agent Market during the review period.

Asia-Pacific is the largest market for epoxy curing agent due to increasing demand in construction in the region, coupled with the growing demand of the consumers towards electronics devices and its increasing growth across the region. The developing countries such as China, India, Japan, South Korea, and other South-East Asian countries are investing heavily towards construction activities, which is likely to fuel the demand for the Epoxy Curing Agent Market during the forecast period. Owing to the increasing demand for coatings, adhesives, and composites in India, Taiwan, and South Korea is a major factor for the upsurge growth of the Epoxy Curing Agent Market in Asia-Pacific.

Asia-Pacific is trailed by North America, which is the second-largest region in the Epoxy Curing Agent Market. The growth of the market in this region is attributed to the growth of infrastructure development in the region. The increase in the number of non-residential construction which has grown by 4.1% in 2018, from 2017, which is coupled with the primary application for epoxy curing agents in the region is expected to boost the market in North America. Europe is another substantial market after North America in the Epoxy Curing Agent Market. The electrical and electronics industry majorly drive the demand for the product in this region.

Latin America and the Middle East & Africa is expected to witness moderate growth in the Epoxy Curing Agent Market during the forecast period mainly due to the applications of epoxy curing agent in end-use industries such as construction and electronics industry.

The Epoxy Curing Agent Market has been segmented based on Product Type, Application, and Region.

Based on Application, the Epoxy Curing Agent Market has been classified into adhesive, coatings, composites, electronics, and others.

The Epoxy Curing Agent Market, by Region, has been segregated into North America, Latin America, Europe, Asia Pacific, and the Middle East & Africa.