Ammonium phosphate is an inorganic salt of ammonium and phosphoric acid, with a chemical formula of (NH4)3PO4. It is highly unstable in nature and as a result, is produced in long-chain molecules to increase stability. It is physically available in different forms such as solid, liquid, dry powder, and pellet crystal, among which the solid form is dominant. Irrespective of the compound being non-combustible, ammonium phosphate decomposes at 155ºC to release toxic fumes of phosphorus oxide, nitrous oxide, and ammonia. It is prominently used as fertilizers and also finds applications in animal feed, fire extinguishers, electronics, and food & beverages, among others.

According to MRFR analysis, the global ammonium phosphate market is projected to reach 84,500 KT at a moderate CAGR of 3.65% during the forecast period. Ammonium phosphate as a fertilizer accounts for the largest market share in 2018 on account of its availability of both nitrogen as well as phosphorus nutrients which is vital for the healthy growth of crops. The increasing demand for better yield from limited arable land to provide food for a growing population is likely to be the major factor driving the global market growth. In addition, the surging demand for the product as a flame retardant in various industries for safety measurements is further expected to boost market growth. Furthermore, its increasing demand as a yeast nutrient in winemaking and brewing; and for purifying sugar is likely to drive the global market growth. Moreover, technological developments of fertilizer formulations for efficient techniques such as drip irrigation and fertigation that uses minimum quantities of inorganic fertilizers are expected to create lucrative opportunities for the market players. Additionally, the growing need for water treatment on account of water scarcity and growing demand in industrial water treatment is further expected to offer immense opportunities for the producers of ammonium phosphate in the coming years.

However, the toxic effects of overfertilization with inorganic fertilizers containing ammonium phosphate is likely to hinder the market growth. Also, excessive fertilization due to increasing pressure on the farmers to enhance the yield form the limited patch of land is further affecting the soil fertility causing soil salination and soil degradation. 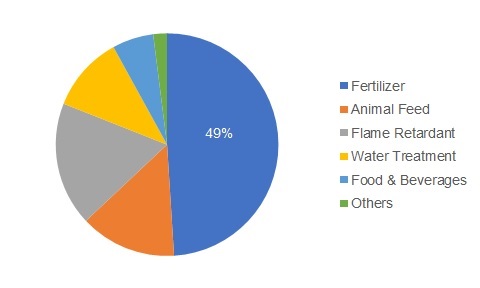 The Asia-Pacific market accounted for the largest market share in 2018 and is projected to register the highest CAGR during the forecast period. This is mainly attributed to the large arable lands, increasing population; and growing industrialization and urbanization. China is the major contributor in the region owing to the large agrarian base, favorable government initiatives, and growing need for safe drinking water. For instance, increasing governmental concerns to provide clean potable water have resulted in various regulations such as Zero Liquid Discharge Policy issued by the Ministry of Environment & Forest. Additionally, the government of Tamil Nadu, India has mandated Zero Liquid Discharge as mandatory for all its industries. Other countries contributing to the regional market growth are India, Japan, and South-East Asian countries such as Indonesia, Malaysia, and Thailand. The North American market held second-largest market share in 2018 owing to better reforms issued by the government on improving methods of irrigation for crops. However, stringent regulations pertaining to the use of chemical fertilizers is likely to limit the consumption of ammonium phosphate. The US is the leading country in the region on account of the increasing demand for ammonium phosphate as a fertilizer in the cultivation of soybean and corn crops. The ammonium phosphate market in Europe accounted for a substantial market share and is projected to register a sluggish CAGR during the review period due to the stringent EU regulations on phosphate fertilizers and is opting for bio-based organic fertilizers which hinders the regional market growth in the coming years. Germany is the prominent country in the region followed by Belgium, France, Italy, and the Netherlands. The Middle East & African market is estimated to register a healthy CAGR during the forecast period owing to the gradual shift towards agricultural activities from oil & gas sector. The Latin American market is also projected to exhibit a robust CAGR in the years to follow on account of increasing awareness among farmers regarding agricultural practices offering better yield of crops such as corn and wheat. Brazil is the major contributor in the followed by Mexico and Argentina.

The global ammonium phosphate market has been segmented based on type, application, and region.

Based on application, the global ammonium phosphate market has been classified as fertilizer, animal feed, flame retardant, water treatment, food & beverages, and others.

At what CAGR is the ammonium phosphate market expected to grow over the forecast period?

Which region is predicted to dominate the ammonium phosphate market?

The APAC region is predicted to dominate the ammonium phosphate market during the forecast period.

What are the key factors driving the ammonium phosphate market?

Which factors may act as deterrents in the ammonium phosphate market?

What are the different applications of ammonium phosphate?

It has wide applications in food and beverage, water treatment, flame-retardant, animal feed, and fertilizers.

Ammonium Phosphate Market Is Estimated To Grow At A Robust Cagr Due To Growing Application As Fer...