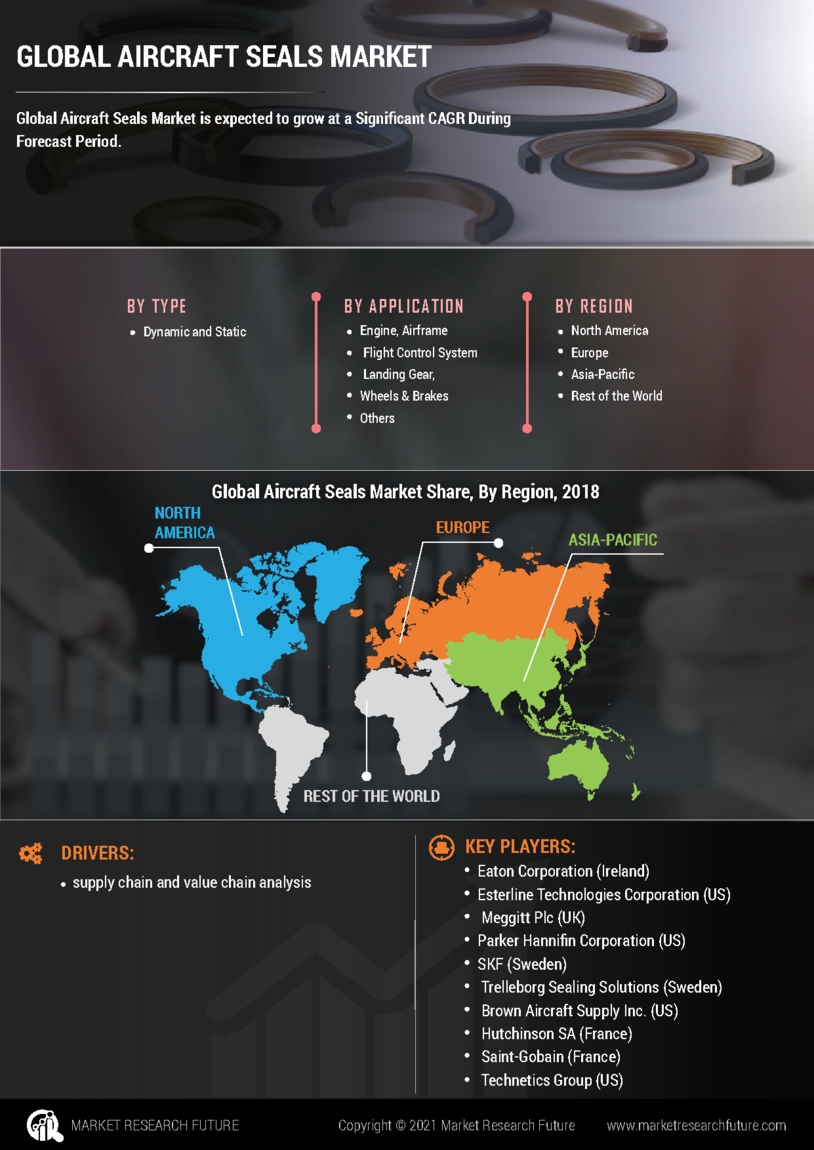 A seal is one of the vital components of an aircraft and prevents the passage, flow, or leakage of gas or fluid between flaps, slats, access panels, doors, and other parts of the aircraft. It is designed to provide long service life and low friction for extreme pressure applications over a wide temperature range. Recently, companies are investing in technology development to produce materials in response to the wide variety of applications, including aircraft gearboxes, air turbine motor starters, and main shaft seals for both aircraft turbine engines and aircraft auxiliary power units. As a result, the higher investments are being made on the development of highly durable aircraft seals to withstand high temperatures.

This is expected to positively impact market growth during the forecast period. However, one of the major restraints of the market is recyclability issues of composite materials and backlogs in aircraft deliveries. The factors responsible for the growing use of aircraft seals are the increasing demand for new commercial and business aircraft, increased defense spending, replacement of old aircraft seals, and growing demand for new fighter jets in developing countries, such as China and India. There were several contracts that fueled market growth. In 2018, Meggitt Plc signed a contract with Canadian AvCorp and Vought Aircraft to supply wheel well, nacelle, and aerodynamic seals. Similarly, in the year 2016, Trelleborg Sealing Solutions acquired CoorsTek Inc., which specialized in the manufacturing of precision seals for the aerospace industry. This acquisition strengthened the presence of Trelleborg in North America and enabled it to provide effective sealing solutions for major aircraft programs.

The global aircraft seals market has been segmented into seal type, application, material, vendor, platform, and region. Based on the seal type, the dynamic seal segment is widely used and comprises the largest share in the market as it provides strengthening and lubrication between the machine components during various movements, such as rotation, reciprocation, and oscillation. Based on material, the composites segment is widely used and comprise the largest share in the market due to high demands for lightweight components. The carbon composite materials possess superior sealing properties such as self-lubrication, heat resistance, and high thermal conductivity, which makes it a suitable choice for sealing material.

Segmentation of the Global Aircraft Seals Market Based on region, the market is segmented into North America, Asia-Pacific, Europe, the Middle East & Africa, and Latin America. North America is expected to dominate the market in the future, due to the presence of leading aircraft manufacturers and engine OEMs. Furthermore, the increased deliveries of commercial aircraft and the presence of MRO facilities in the US and Canada have contributed to the high demand for aircraft seals. Asia-Pacific is expected to follow North America due to the increased air travel because of the rising per capita disposable income in the region. Thus, the aircraft seals market is estimated to witness rapid growth, at a CAGR of approximately 5% from 2018 to 2025.

Primary Research In this process, both the demand- and supply-side parties are interviewed to extract facts and insights into the market forecast, production, trends, and projected market growth. Industry stakeholders such as CEOs, VPs, directors, and marketing executives across the value chain are approached to obtain key information.