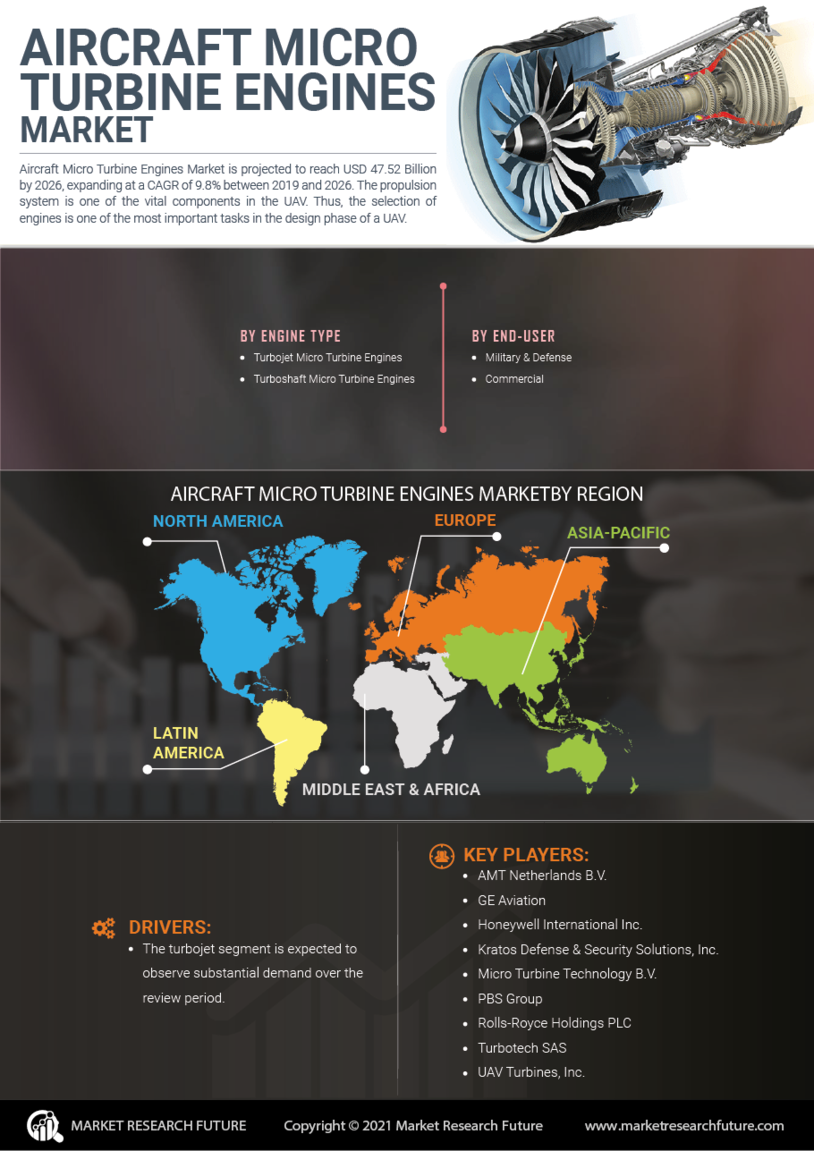 Aircraft micro turbine engine are small-scale combustion turbines that use micro combustion to provide cogeneration, or the simultaneous use of heat and electricity. It is preferred because of its features such as the use of various fuels, small size, and efficiency. Because aircraft micro engines are small, they may fit in very small spaces, freeing up space for other components in the design. The market has a promising growth potential over the projected period, owing to the inherent operational benefits of micro turbine engine  engines, such as low operating and maintenance costs and the introduction of new generation hybrid design in aircraft.

The impact of COVID-19 on the aircraft microturbine engine sector was unexpected, and it will continue in effect until the second quarter of 2021. The COVID-19 outbreak compelled governments to enforce strict lockdown measures, resulting in aircraft cancellations and a restriction on e-commerce services, resulting in a major drop in commercial aviation and logistical activity worldwide. Furthermore, the statewide lockdown impacted supply chains by forcing various manufacturing facilities throughout the world to partially or completely shut down their operations.

According to the International Civil Aviation Organization's (ICAO) yearly global statistics, the total number of commuters carried on scheduled flights increased to 5.2 % as compared to 2018. The overall passenger load factor in 2021 was 68 percent, down from 82 percent in 2019.

Thus, throughout the projected period, the increase in air traffic is expected to boost the growth of the aviation micro turbine engine market.

According to the Stockholm International Peace Research Institute (SIPRI), worldwide military spending will reach $1,981 billion in 2020, a 2.6% rise from the previous year. In 2020, military spending would account for 2.4% of the global GDP. As a result of increased global military spending, the adoption of modern, more devastating warfare technology, such as highly efficient aircraft micro turbine engine, has increased. The increase in defense spending by several countries around the world is likely to drive the growth of the aircraft microturbine engine market during the forecast period.

According to NASA, distributed electric propulsion (DEP) technology is based on the assumption that tightly integrating the propulsion system with the airframe and dispersing several motors throughout the wing will boost efficiency, cut operating costs, and increase safety. The DEP employs propulsors that can be placed, scaled, and controlled with greater flexibility, allowing it to capitalize on the synergistic benefits of aero-propulsive coupling and outperform more traditional designs. Furthermore, the careful integration of electrically driven propulsors for boundary-layer ingestion increases propulsive efficiency. Propulsor placement and configuration can also be employed to reduce a lifting surface's trailing vortex system or to leverage an increase in dynamic pressure across blown surfaces for improved lift performance.

The growing temperature of the exhaust gases exacerbates the high-temperature condition. However, exhaust gas temperatures can be managed by recycling the excess heat to boost power output even further. To employ microturbine engines in aircraft, specialized cooling methods must be used. Adoption of this technology may be modest due to the greater mechanization involved. As a result, it may impede the expansion of the aviation microturbine engine industry.

The global aircraft micro turbine engine market has been segmented on the basis of Engine Type, Application, Fuel Type, End-User, and Region.

The global aircraft micro turbine engine market, based on Engine type, has been segmented into Turbojet, Turboshaft and Turboprop. The Turbojet segment accounted for the largest market share in 2021 and is projected to grow at a CAGR of 5.5% during the forecasted period.

.The global aircraft micro turbine engine market, based on fuel type has been divided into Jet Fuel, Diesel and Others.

On the basis of end-user the global aircraft micro turbine engine market has been divided into commercial aviation and military avaiation.

The global aircraft micro turbine engine market has been studied across Asia-Pacific, North America, Europe, the Middle East & Africa, and South America. North America accounted for the largest market share in 2021 due to the presence of major companies, dealers, and suppliers in the U.S. and Canada such as Jetcats America, Honeywell International, and GE Aviation.

The factors contributing to the market growth in  Asia-Pacific include the Indian government is increasing its defense spending. This in turn has increased demand for the procurement of military helicopters and fighter aircraft, supporting the market's expansion. In APAC, China is the main market for aviation microturbine engines. This region's market will expand more quickly than those in other areas.

Europe is the fastest-growing regional market globally due to an increase in the number of electric aircraft development programs, the creation of aerial vehicles with cutting-edge technologies, and an increase in air traffic are the main factors anticipated to contribute to the market's expansion in this region over the course of the forecast period.

The U.S. Department of Energy has chosen Raytheon Technologies for two R&D projects investigating the viability of using hydrogen and ammonia as efficient, carbon-free solutions for generating energy. In the first project, Raytheon Technologies will verify its ability to use hydrogen and hydrogen blends as fuel to run Mitsubishi Power Aero's FT4000 gas turbine unit. The PW4000TM turbofan aviation engine from Pratt & Whitney is available as the FT4000, a land-based version on July 2022

Which region is driving the market?

The North American region is expected to drive the market during the forecasted period.

What is the growth scope of the market?

The global aircraft micro turbine engine market has been growing rapidly from the past few decades and is expected to reach USD 3,573.7 Million by 2030, at a CAGR of 5.9% during the forecast period.

The North America region is expected to be the largest market for Micro turbine engine market during the forecast period.

High overall temperature of system may slow the growth of the Micro turbine engine market during the forecast period.

Increase In Procurement Of Military Aircraft Amid Rise In Geopolitical Tension And Low Operation ...