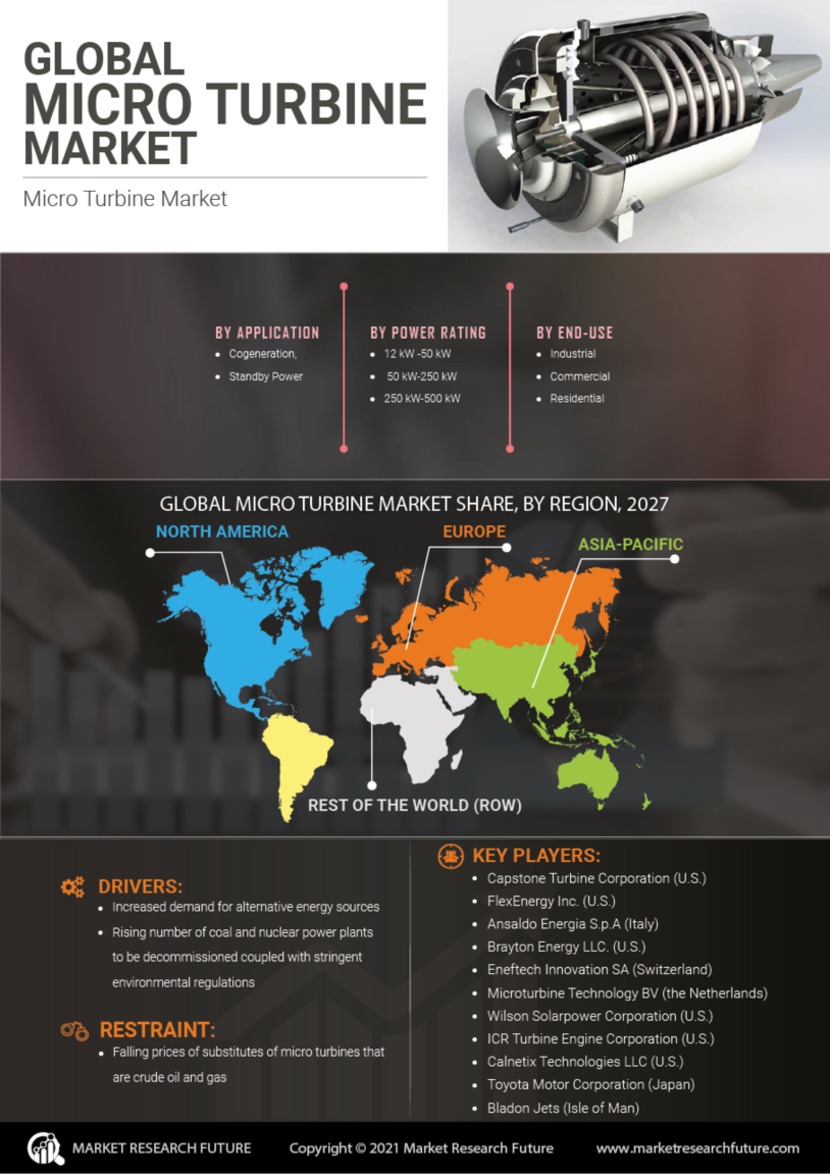 Micro turbine market is expected to grow at a higher CAGR of 10% to account for a higher market value during the estimated period in the global market.

With the increasing demand for aging grid infrastructure, clean and green energy, and easy availability of fuel, a distributed source of energy generation used is micro turbines. Due to growing environmental concerns of global warming, various agreement related for the same issue has been made which drives the growth of micro turbine market in the global market as all the other source of energy emits highly poisonous gasses which leads to global warming.

With the growing outbreak of the global pandemic of COVID 19 businesses have suffered huge losses which have pushed the economies towards forced recession. The growing wave of the global pandemic has suffocated the individual to fight between the financial crises along with health concerns. The situation of lockdown has resulted in shut down of most of the manufacturing units which leads to a steep downfall in the sales revenue of the micro turbine industry all across the globe.

However, it is expected that the micro turbine market will recover from this global pandemic of COVID 19 by strategizing properly to meet the requirements of their customers. Also, it is expected to recover at the end of the second quarter in the coming year.

The most prominent major key players in the micro turbine market in the global market are mentioned below:


These major key players use various strategies to sustain their market position in the micro turbine market in the global market by collaborating, by going for mergers, and acquisitions, setting up a new joint venture, establishing a partnership, developing a new production process, innovation in the existing product, developing a new product line, and many others to expand their customer base in the untapped market of the micro turbine all across the globe.

The demand for the micro turbine market is increasing rapidly in the global market owing to the increasing demand for clean energy. Various agreements related to climate change like United Nations Framework Convention on Climate Change (1992) and Kyoto Protocol (1997) has been made to reduce global warming which restricts the use of fuels that emit harmful gasses and hence there is an urgent need for a clean energy source to cater to the increasing need for environmental-friendly energy which leads to increase in demand for the market.

The demand for the micro turbine market is increasing constantly in the global market. Earlier nuclear power plants were considered affordable, clean, and reliable sources of energy but after the Fukushima nuclear accident, this perception is changing. Also, the overhead cost of nuclear power is high owing to which 2 nuclear plans have been stopped. As there is no other alternative present, it provides enormous growth opportunities for the market during the estimated period in the global market.

The market in the global market has been divided based on the power rating, application, end-users, and region.

Based on the Power Rating

Based on the End-Users

The market in the global market has been divided based on the end-users into residential purposes, commercial purposes, and other industrial purposes.

The second-largest market share in the micro turbine market in the global market is held by the European region owing to increasing demand for energy in countries like Russia, UK, and Germany. The strict rules and regulations regarding environmental protection are another contributing factor.

The third-largest market share in the market in the global market is held by the Asia-Pacific region and showing a positive growth rate towards the market. The increasing demand for energy by highly populated countries like India and China drives the demand for the micro turbine market in this region.

The market is going to reach a CAGR of around 10%.

Which region is going to lead the market?

Which region is going to witness the largest share by 2023?

The region is expected to witness largest market share by 2023.

Which key competitors of the market are highly praised?

What is the main factor leading the market’s growth?

The growing environmental concerns for global warming is the leading factor of the micro turbine market in the forecast period.

Which factor drives the growth of the micro turbine market?

The increasing concern about global warming and demand for clean sources are the driving factors in the micro turbine market.

Green Energy Generation Being A Necessity, The Global Micro Turbine Market Expected To Grow By 2023