Acetic Anhydride Market By Application (Cigarette Filters, Coating Materials, Intermediate, Dyes, Flavors And Fragrance, Pesticides, Synthesizer, And Others), End-User (Pharmaceuticals, Textiles, Agrochemicals, Food And Beverages, And Others) And By Region Till 2030

Acetic Anhydride Market Overview  Acetic Anhydride Market is projected to be worth USD 10.57 Billion by 2028, registering a CAGR of 5.45% during the forecast period (2021 - 2028). Acetic anhydride is a key raw material required in producing medicines, such as acetylsalicylic acid that is aspirins, sulfa drugs, certain vitamins and hormones, acetyl-p-aminophenol, cortisone, acetanilide, theophylline, acetylcholine hydrochloride, acetophenacetin, sulfonamides, and paracetamol. There has been an enormous growth in the number of global general health issues, such as fever, cough and cold, body pains, nausea, etc. This has led to increased demand for drugs like aspirin and paracetamol. The increasing consumption of generic drugs is a boon to the market for acetic anhydride. There has been rapid growth in the demand for the pharmaceutical sector services in the past few years. The growth trend is expected to continue because of the increasing health issues among people. Asia-Pacific is the largest consumer in the global market. The region has witnessed a growth in the number of health issues, including fever, cough & cold, body pains, nausea, etc. Healthcare has become one of India’s largest sectors due to its strengthening coverage, services, and increasing expenditure by public and private players. The government’s expenditure for the improvement of healthcare in the population increased to 1.4% from 1.2%. This has led to increased demand for drugs like aspirin and paracetamol. 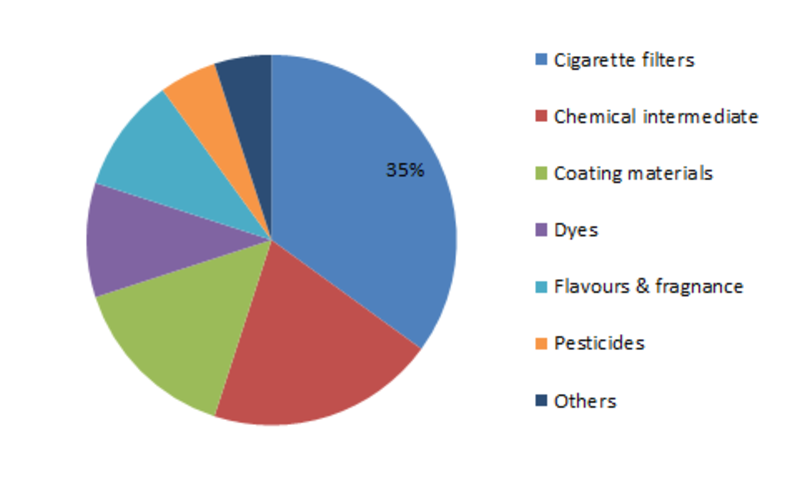 Asia Pacific is anticipated to be the fastest growing region in the market during the review period. The increasing demand from various end-use industries such as pharmaceuticals, textiles, and polymers among others is likely to drive the market in this region. Countries such as China, Japan, and India are the major contributors to the market growth in this region. China is the largest acetic anhydride and cellulose acetate producer in this region due to the lower manufacturing and labor cost. India is expected to witness a significant market growth on account of the growing demand for textiles, pharmaceuticals, and polymers industries.

The rising demand for tetraacetylethylenediamine (TAED) for laundry market and cellulose acetate for cigarette market is likely to drive the acetic anhydride market in Europe during the forecast period. European countries such as Germany, U.K, Italy, and France are the major contributors to the market growth due to a huge demand for the product.

The Middle East & Africa is expected to witness a stable market growth owing to the increasing demand from pharmaceutical industries in the near future.

The global acetic anhydride market is segmented on the basis of its application, end-user, and region.

Based on the application, the global market is segmented into cigarette filter tows, intermediate, coating materials, dye, flavors & fragrance, pesticides, synthesizer, and others.

By end-user, the global market is segregated into pharmaceuticals, textiles, agrochemicals, food & beverages, and others.


The growing usage of TAED in the laundry detergent segment has driven the global market share. Adoption of E-cigarettes and declining usage of acetic anhydride for cellulose anhydride are likely to hinder the market’s growth. The development of Acetylated Wood is projected to act as an opportunity for the market in the future. The market for acetic anhydride is chiefly driven by great demand from the cigarette tow market. Cellulose acetate is mainly consumed in cigarettes. Acetic anhydride is used in dyes, fragrances & flavors and the textile industry. Acetate cellulose is further, used in acetate textile fibers. It is hence, accelerating the demand for acetic anhydride. Also, acetic anhydride has a reliable use in artificial sweeteners, pharmaceuticals, resins, polymers, coatings, modified starches, and the pesticides market.

What is acetic anhydride?

Acetic anhydride is a colorless organic solvent that is a highly concentrated form of acetic acid with all water removed.

What is acetic anhydride used for?

Acetic anhydride is majorly used as a reagent in organic synthesis, as well as in wood preservation applications to produce long-lasting timber.

The growing demand for cellulose acetate is the major driver for the acetic anhydride market.

North America is the leading regional market for acetic anhydride.

Leading players in the market include Celanese, BASF, and Eastman, among others.

Acetic Anhydride Market Is Estimated To Grow At a Significant CAGR Due To Growing Demand For Ciga...